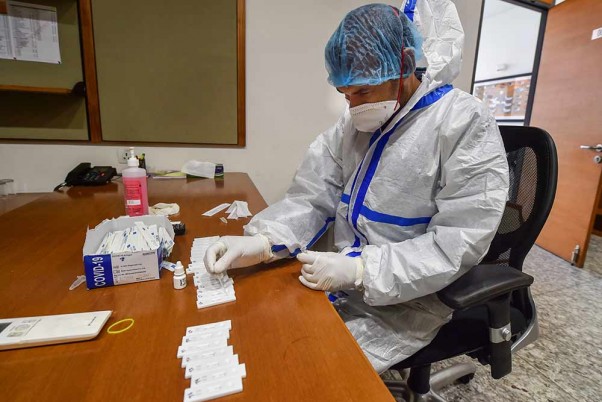 With nine deaths, five of them in Kangra district alone and 709 new cases in the past 24 hours, Himachal Pradesh finds itself in a tight spot over Covid-19 spread, especially after Wednesday’s four municipal corporation elections.

Of the total 14 deaths in the past 36 hours, seven took place in Kangra, the state’s biggest district which has witnessed a hectic two-week-long campaign at Dharamshala and Palampur municipal corporations. Also among the total 709 cases, Kangra alone accounted for 164 positive cases.

Till now, Kangra had a comparatively low fatality rate as compared to Una, which is another border district with less population but high infection rate.

The Next 10-15 Days Likely To Be Difficult For Himachal, Says Health Secretary

Kangra deputy commissioner Rakesh Prajapati ensured that the testing rate was high, both at Dharamshala and Palampur.

Among those who lost their lives to Covid in Kangra on Wednesday included a 95-year old woman and 56-year-old man.

The health officials admitted that Covid has reached the community spread level in Kangra district, apart from Una, Solan and Sirmaur.

The chief minister himself had campaigned extensively as a star campaigner knowing that his own prestige was at stake since the elections were being held on party symbols. Mandi witnessed highest 70 per cent polling followed by Palampur 69 per cent. Turnout in Solan and Dharamshala was 62.25 and 63 per cent respectively. Counting of votes has begun.

State health secretary Amitabh Awasthi has gone on record to sound an alarm saying the next 10 to 15 days would be very difficult for Himachal Pradesh. There are chances of fatality rate going up and a spurt in infections.

"You may see a quantum jump in the cases,” he said.

Chief Minister Jai Ram Thakur once again on Wednesday ruled out the possibility of a lockdown in the state. The government may introduce Covid-negative report mandatory for those coming from cities with high load of casesthough there will be no checking or setting up of special barriers at the borders, i.e. the state's entry points.

“The number of persons in open spaces/grounds in areas outside containment zones, keeping the size of the ground/space will be 50 per cent of the capacity but a maximum of 200 people. In closed spaces and in areas outside the containment zone, the number of persons allowed would be 50 per cent of the hall capacity but a maximum of 50 persons,” said the order.