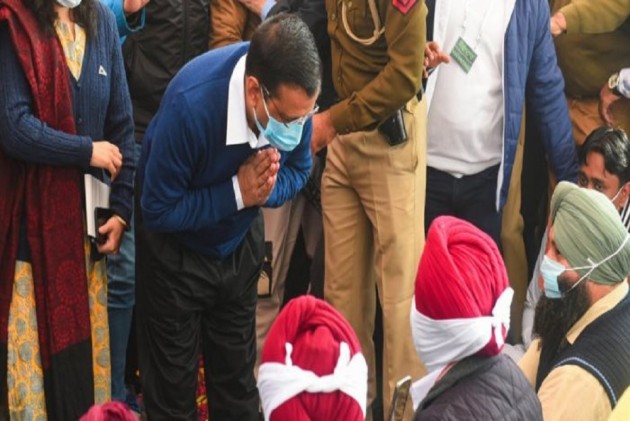 The Aam Aadmi Party (AAP) on Tuesday alleged that the Delhi Police has put Chief Minister Arvind Kejriwal under house arrest after he met protesting farmers at the Singhu border, a claim denied by the city police.

Kejriwal had visited the Singhu border on Monday and reviewed facilities for farmers protesting against the agri marketing laws.

Roads To Take For Entering, Exiting Delhi-Haryana Ahead Of Farmers' Bharat Bandh Call

"On the direction of the Home Ministry, the Delhi Police has put Chief Minister Arvind Kejriwal under house arrest ever since he visited farmers at Singhu border. No one has been permitted to leave or enter his residence and he has not been allowed to meet anyone. When our MLAs went to meet the Chief Minister they were beaten and thrown on the streets. The party volunteers were also not allowed to meet," he alleged.

"BJP leaders are standing at the gates of the residence and are being welcomed by police personnel. There is heavy barricading on all sides and even the housemaid is not being allowed inside the residence. The Centre is scared that if in this Bharat Bandh, the chosen CM of Delhi stands with farmers then the lie of the Centre will be exposed," Bhardwaj charged.

Mayors, deputy mayors and various other senior leaders of the three BJP-led municipal corporations of the city have been sitting on a dharna outside the official residence of Kejriwal since Monday to demand release of "due funds".

Bhardwaj further said that AAP members will ensure that Kejriwal is "released".

"We were told that there are direct orders from the MHA to keep Kejriwal under house arrest till farmers protest is going on. Today, all our party members have assembled here and we will go towards Kejriwal's residence. if police stops then we will not misbehave but will go to the residence and ensure that Kejriwal is released," he said.

Refuting the charge, a senior Delhi Police officer said, "This is not true. The Chief Minister can come and go anywhere. We have our security personnel deployed outside his residence. Even last evening, he had come out".

"There is absolutely no restriction on movement of people. We have deployed our teams there as a precautionary measure to avoid any clash between BJP and AAP members," the officer said.

Anto Alphonse, Deputy Commissioner of Police (North) also tweeted a photo of the entrance of Kejriwal's residence and denied the allegations.

"This claim of CM Delhi being put on house arrest is incorrect. He exercises his right to free movement within the law of the land. A picture of the house entrance says it all," the DCP North Delhi tweeted.

Other AAP leaders also claimed that the Centre has put Kejriwal under house arrest to ensure that he does not express his support to farmers during the strike.

"Arvind Kejriwal was put under house arrest ever since he returned from the Singhu border. The government does not want Kejriwal to stand with farmers and that is why they took this step," AAP Rajya Sabha MP Sanjay Singh charged.

"By putting Kejriwal under house arrest, the Centre wants to curb all the voices that have come out in support of farmers," Delhi Health Minister Satyendar Jain charged.

The Aam Aadmi Party (AAP) has extended its support to the ''Bharat Bandh'' called by farmers' organisations.

Thousands of farmers, mostly from Punjab, Haryana and Uttar Pradesh, are protesting at various border points of Delhi against the new farm laws.

The Centre's offer to amend the contentious laws failed to cut ice with farmer groups during the fifth round of talks on Saturday.