Restrictions were re-imposed in certain parts of Kashmir Valley which witnessed clashes between protesters and security forces on Saturday. 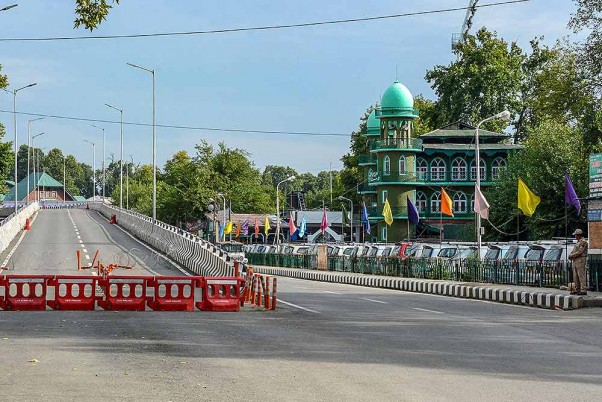 Restrictions were eased in 50 police station areas of the Valley on Sunday though curbs were tightened in some parts of Srinagar after stray incidents of violence and Internet services snapped again in five districts of the Jammu region, a day after they were restored, as strict security arrangements continued in Jammu and Kashmir.

Restrictions were reimposed in certain areas which witnessed clashes between protesters and security forces on Saturday, hours after the curbs were eased in several areas of the city and elsewhere in the valley, the officials said.

Suppressing The Valley's Will Through Stealth And Sieges Is Counterproductive'

Blog | Indian Armed Forces, Civilians Continue To Bleed In Internal Conflicts, But Do We Care?

Protests took place at around a dozen places in which several protesters were injured.

Kansal said a new week is starting from Monday and "we are looking at it with a new hope".

"Over 190 primary schools will reopen tomorrow in Srinagar alone and after this, we look forward to other areas like taking up development-related activities," he said.

Kansal said the duration of relaxation was also increased from six hours to eight hours on Sunday.

"The relaxations were announced thereby enabling people and shopkeepers to plan in advance. The relaxation hours were increased keeping in view the response yesterday and the request by traders. This process will continue in the days to come," he said.

The government spokesman said there were reports of "hooliganism by some mischievous elements coercing the shopkeepers" in some areas to shut their shops.

Meanwhile, low-speed (2G) mobile Internet services were once again snapped in five districts of Jammu region on Sunday to check rumour-mongering, a day after the services were restored.

A police official said service providers were directed to snap the 2G services on Sunday in order “to check rumour-mongering and maintain peace and tranquility”.

Low-speed mobile Internet services were restored in five districts of Jammu, Samba, Kathua, Udhampur and Reasi during the intervening night of Friday and Saturday after remaining suspended since August 4 --  a day before the Centre revoked provisions of Article 370 that gave special status to Jammu and Kashmir and bifurcated it into two union territories.

Immediately after the resumption of 2G mobile Internet services in five districts of Jammu region, Jammu Inspector General of Police Mukesh Singh had warned of strict action against anyone circulating fake messages or videos on social media.

Government spokesman, Rohit Kansal, had on Saturday said the restrictions were eased in 35 police station areas of the valley. However, several places witnessed clashes between groups of youth and security forces, leading to re-imposition of the curbs.