According to the Cyclone Warning Division of the IMD, by May 18, the wind speed is expected to increase to 150-160 kilometres per hour, gusting up to 175 kmph. 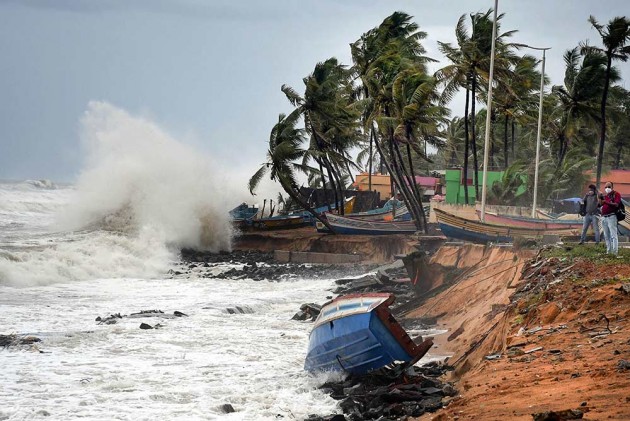 The Indian Meteorological Department (IMD) on Sunday said that cyclone Tauktae has intensified into a "very severe cyclonic storm" and is approaching the Gujarat coast. The IMD has also issued a yellow alert for the coasts of Gujarat and Diu and Daman.

"It is very likely to move north-northwestwards and reach Gujarat coast in the evening hours of 17th (May) and cross Gujarat coast between Porbandar and Mahuva (Bhavnagar district) around 18th May early morning," the IMD said.

According to the Cyclone Warning Division of the IMD, by May 18, the wind speed is expected to increase to 150-160 kilometres per hour, gusting up to 175 kmph.

Squally wind speed reaching 40-50 kmph gusting to 60 kmph is likely over the northeast Arabian Sea and along and off south Gujarat and Daman and Diu coasts from morning May 16.

It will gradually increase, becoming gale with speed reaching 150-160 kmph gusting to 175 kmph over the northeast Arabian Sea and along and off Gujarat coast (Porbandar, Junagarh, Gir Somnath, Amreli) and 120-150 kmph gusting to 165 kmph over Devbhoomi Dwarka, Jamnagar, Bhavnagar districts of Gujarat from the early hours of May 18.

Winds with speed reaching 70-80 kmph gusting to 90 kmph are likely to prevail along and off Dadra, Nagar Haveli, Daman, Valsad, Navsari, Surat, Bharuch, southern parts of Ahmedabad and Anand districts from the midnight of May 17 and till the morning of May 18.

A nearly 3-metre-high tidal wave is expected in Junagarh, 1-2.5 metres above astronomical tide is likely to inundate coastal areas of Diu, Gir Somnath, Amreli, Bharuch, Bhavnagar, Ahmedabad, Anand, Surat and about 0.5-1 metres over Devbhoomi Dwarka, Jamnagar, Porbandar, Kutch and the remaining coastal districts of Gujarat during the time of landfall, the IMD said.

According to the weather department, in Gujarat's Bhavnagar district, total destruction of thatched houses, extensive damage to kutcha houses and some damage to pucca houses is expected. There could be a potential threat from flying objects with bending or uprooting of power and communication poles.