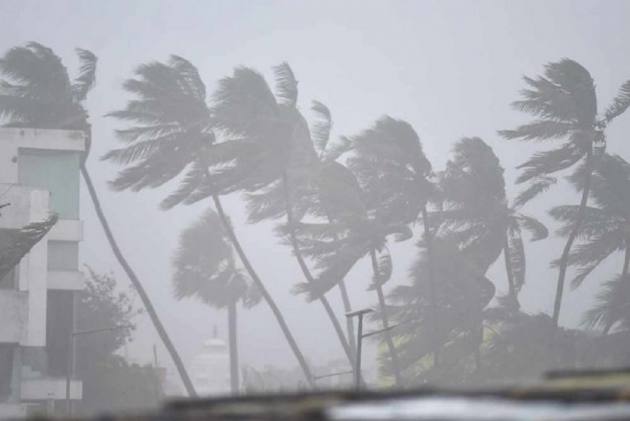 Normal life was thrown out of gear as heavy to extremely heavy rainfall ranging from 6 cm to 30 cm battered at least half of Andhra Pradesh under the influence of cyclone Nivar, leaving one dead.

Another farmer was feared washed away while NDRF personnel rescued two others from a reservoir in Chittoor district.

Other districts like Anantapuramu, Kurnool, Guntur and West Godavari were also receiving moderate to heavy rainfall under Nivars impact.

It said gales with a speed of 45-65 kmph were lashing SPS Nellore and Chittoor districts bordering Tamil Nadu.

Tirumala Hills, the abode of Lord Venkateswara, has been receiving incessant rain since Wednesday, causing a lot of hardship to hundreds of devotees stranded there.

In SPS Nellore district, which was the worst hit with rainfall as high as 30 cm, at least 3,363 people were shifted to 115 relief camps from vulnerable areas, district Collector Chakradhar Babu said.

The Swarnamukhi river in SPS Nellore district was in spate while the Somasila reservoir received an inflow of 65,000 cusecs.

State Water Resources Minister P Anil Kumar visited some relief camps and spoke to the affected people. He later reviewed the situation with his department officials and directed them to ensure that there were no breaches to tanks.

Reservoirs in SPS Nellore, Chittoor and Kadapa districts filled to the brim following which excess water was being let out into the streams and rivulets downstream. This has resulted in water overflowing on roads at many places, cutting off road communication, and also inundating agricultural fields.

The rain left standing crops in several hundred acres inundated in some districts, according to preliminary reports received at the State Disaster Management Authority here.

Chief Minister Y S Jagan Mohan Reddy reviewed the situation with top officials here on Thursday afternoon and asked the respective district Collectors to be on high alert and render every assistance wherever required.

The Chief Minister asked SPS Nellore district Collector to render all assistance to the family of the person who died of electrocution on Wednesday.

In Chittoor district, three farmers went to their fields to fetch electric motors but were suddenly caught in a swirling flood from the Mallemadugu reservoir on Thursday.

While NDRF and State Emergency Response and Fire Services personnel rescued two farmers, another was washed away and efforts were on to trace him.

"We tried to deploy a helicopter for the rescue operation but inclement weather did not permit it. Still, our teams are continuing the search operation for the missing farmer," Chittoor district Collector Narayana Bharat Gupta said.

He asked people not to venture out of their homes for two days in view of the turbulent situation.