Rejecting the claims, the BJP described this explosive allegation as a "hacking horror show organised" by the Congress and said the opposition party has begun looking for an excuse for its likely defeat in the next Lok Sabha polls. 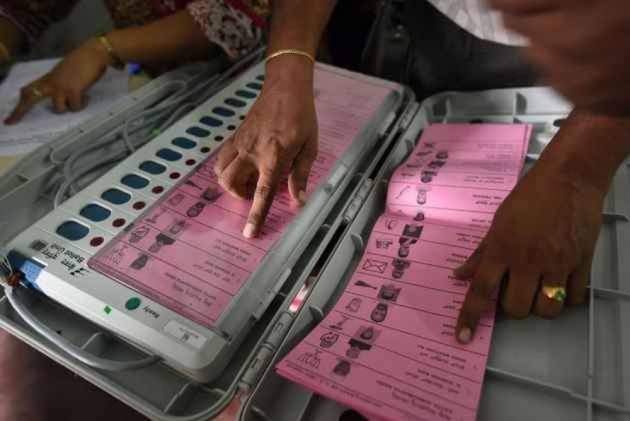 An Indian cyber expert, seeking political asylum in the US, Monday claimed that the 2014 general election was "rigged" through the Electronic Voting Machines (EVMs), which, he says, can be hacked.

Addressing a press conference in London via Skype, the man, identified as Syed Suja, said he fled India in 2014 because he felt threatened in the country after the killing of some of his team members.

He claimed the telecom giant Reliance Jio helped the BJP to get low-frequency signals to hack the EVMs.

Shuja said the BJP would have won Rajasthan, Chhattisgarh and Madhya Pradesh elections if his team hadn't intercepted the BJP attempts to hack the transmissions in these states.

The outlandish and explosive claims, made in a cloak and dagger manner, could not be immediately confirmed. He claimed he was part of a team at the public sector Electronic Corporation of India Ltd (ECIL), which designed and developed the EVMs. He was presented at a press conference organised by the Indian Journalists' Association (Europe).

Although he appeared on screen through Skype, his face was masked.

Several political parties in the past have alleged that the EVMs are prone to tampering and demanded reintroduction of the ballot papers.

Speaking at the event in London, Shuja claimed that he worked for the ECIL from 2009-2014.

Shuja said that he was part of a team which designed the EVMs used in the 2014 elections. He said that he and his team were instructed by the ECIL to find out if EVMs could be hacked, and find out how to do this.

"The 2014 general elections were rigged," he claimed.

He also alleged that the Uttar Pradesh, Gujarat, Madhya Pradesh, Rajasthan, Chhattisgarh and Delhi election results were rigged during the elections.

The cyber expert claimed that the EVMs were hacked by the BJP using a modulator which transmits military-grade frequency.

The cyber expert also claimed that BJP leader and union minister Gopinath Munde was "killed" because he was aware of EVM hacking in 2014 general elections.

Munde died in a road accident in New Delhi weeks after the BJP won the 2014 elections.

Shuja also claimed the NIA officer investigating Munde's death, Tanzil Ahmed, was planning to file an FIR noting he had been murdered, but was himself killed.

"In Delhi state elections in 2015, we managed to intercept the transmission, resulting in the AAP winning 67 out of 70 seats. Otherwise the BJP would have swept," he claimed.

He said that other than the BJP, the SP, BSP, AAP and Congress too are involved in the EVMs rigging.

Shuja said some of his team members were killed and he was also allegedly attacked but survived.

He said he met a prominent Indian journalist and told him the whole story about the EVM rigging.

The Election Commission and political parties were invited to be at press meet but only Congress leader Kapil Sibal attended the event, he added.

Soon after Shuja's press meet in London, West Bengal Chief Minister Mamata Banerjee said the opposition will take up with the Election Commission the claims made by the US-based cyber expert that Electronic Voting Machines (EVMs) can be hacked.

"Our great democracy must be protected. Every vote of yours is precious. All Oppn parties discussed the #EVM issue after the #UnitedIndiaAtBrigade rally. We are working closely together and decided on Jan 19 itself to consistently take up the matter with EC. Yes, every vote counts," she tweeted.

Our great democracy must be protected. Every vote of yours is precious. All Oppn parties discussed the #EVM issue after the #UnitedIndiaAtBrigade rally. We are working closely together and decided on Jan 19 itself to consistently take up the matter with EC. Yes,every vote counts

Rejecting the claims, the BJP described this explosive allegation as a "hacking horror show organised" by the Congress and said the opposition party has begun looking for an excuse for its likely defeat in the next Lok Sabha polls.

In a sharp attack on the Congress, Union minister Mukhtar Abbas Naqvi said its leader Kapil Sibal's presence at the press conference in London was not a coincidence. Naqvi alleged that top Congress leaders, including its president Rahul Gandhi and his mother Sonia Gandhi, would have sent Sibal as their "postman".

"Electronic Voting Machines cannot be hacked. What is clear is that anti-India forces have hacked into the mind of Congress. What we have seen is a hacking horror show organised by the Congress ahead of its defeat in Lok Sabha polls. It is looking for an excuse for its impending loss," the BJP leader told reporters.

He said these allegations were part of an exercise to "defame" India and people will never accept such attempts.

To a question about the IJA organising it and not any political party, Naqvi said the Congress has "many freelancers" and they have presence even in Pakistan.

Naqvi said opposition leaders' attempts to discredit EVMs failed in India and they are now trying to do so abroad as there are forces there that want to defame the country and its election process.

He made a strong defence of EVMs, saying the Congress recently won polls in three states and other opposition parties have come to power in states like Bihar and West Bengal.

The Congress-led UPA was in power for 10 years, he said, noting that all these polls were held through EVMs.

Indian elections are so credible that representatives of foreign countries come here to study the polling process and praise it, Naqvi said.

The parties questioning EVMs have never been able to present any evidence before the Election Commission to back their claims, he said.

He also rejected as a "lie" Suja's allegation that Union minister Gopinath Munde was "killed" because he was aware of EVM hacking in 2014 general election.

The Election Commission asserted that it firmly stands by "empirical facts about foolproof nature" of its machines and said it is examining as to what legal action "can and should" be taken in the matter.

In a statement issued, the poll panel said whereas it has been "wary of becoming a party to this motivated slugfest", it firmly stands by the "empirical facts about foolproof nature of ECI EVMs" used in elections in India.

It reiterated that the EVMs used by it are manufactured by Bharat Electronics Limited (BEL) and Electronics Corporation of India Limited (ECIL) under "very strict" supervisory and security conditions.

It said, there are rigorous standard operating procedures "meticulously observed" at all stages under the supervision of a committee of eminent technical experts constituted in 2010.

"It is being separately examined as to what legal action can and should be taken in the matter," the EC statement said.

India's Chief Election Commissioner Sunil Arora earlier this month said that the EVMs were tamper-proof and an expert committee was looking after their functioning.

There is absolutely nothing to doubt about the integrity of the system, Arora had said, adding that the entire functioning of the EVMs is being looked after by a highly-qualified technical committee.