Every year, most of Bihar’s workforce migrate to other states before the onset of monsoon not only in search of livelihood but also to escape the miseries heaped upon by the annual phenomenon of floods. 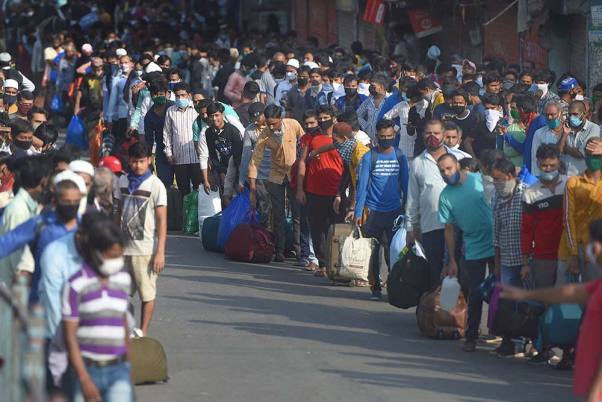 Migrants stand in queues outside Dharavi slums to take buses to reach a railway station and board a special train to their native places, during the ongoing COVID-19 nationwide lockdown, in Mumbai.
PTI Photo
Giridhar Jha 2020-05-15T17:50:48+05:30 Current Crisis Tip Of Iceberg, Flood Scourge Awaits Migrants On Return To Bihar

The current migrant crisis, which has hit the country like a sledgehammer during the ongoing lockdown, may well just be a tip of the iceberg. In less than two months, millions of poor people will have their annual rendezvous with a familiar scourge: floods.

Come July, several parts in the country will be grappling with devastating floods, which will throw life out of the gear causing immense loss to the lives and property. As usual, it will wreak havoc for the hapless migrant workers who do not have any regular sources of livelihood. North Bihar, believed to be the largest exporter of unskilled workers, appears to be in for a bigger calamity this time with the return of the lakhs of people during the lockdown. They will have nowhere to go during the monsoon-hit months because of the mounting Coronavuirus crisis.

Every year, most of Bihar’s workforce migrate to other states before the onset of monsoon not only in search of livelihood but also to escape the miseries heaped upon by the annual phenomenon of floods. They usually stay away for a minimum of four months in distant places waiting for the floods to recede before returning to their home state. But this year, all exit routes appear to have been sealed on their return.

With no let up in the number of Covid-19 cases, especially in the big cities such as Mumbai and Delhi, which provide maximum work opportunities to daily wagers from states like Bihar, it is unlikely that they would venture out of their native places until the contagion threat subsides. But will they able to survive along with their families in their marooned villages? It is a big worry that needs to be addressed by the powers that be in the weeks to come.

Year after year, most of the North Bihar districts, from East Champaran and Gopalganj to Araria and Supaul, have to brace for the floods with or without excessive rainfall during the monsoon. More often than not, floods in Bihar are caused by heavy rains in the catchment area of the adjoining Nepal districts, but the state can hardly do anything about it. There has been a long-standing demand to build a dam along the Indo-Nepal border so as to check the flow of rain water into Bihar from the Himalayan nation, but nothing has happened despite protracted talks between the mandarins of both countries. In 2008, a breach in the eastern embankment at Kusaha in Nepal had caused devastation in several districts of Bihar, leaving more than 500 people dead, 3,600 people missing and more than 30 lakh homeless.

The situation has since gone from bad to worse. The number of Bihar migrants leaving for bigger cities, especially those from the Mithilanchal, Kosi and Seemanchal areas, have risen exponentially in the past decade. Left with no option back home due to flagrant dearth of employment opportunities, they need to get out of their villages during the flood-hit months every year,  but what will they do now? Both the Centre and the state government, therefore, have a task cut out for them to deal with an impending crisis that will aggravate the current problem during monsoon.

Also Read: Home Too Far: Unable To Register Online, Migrants In Delhi Left In The Lurch

The floods have always been a big problem for the successive governments in Bihar. Last year, the Nitish Kumar-led government had faced a tough time in tackling a flood-like situation in Patna. This year, it may well have to contend with an unprecedented humanitarian crisis if it does not make a comprehensive plan to deal with the situation arising out of the return of the lakhs of unemployed people to an uncertain future.