So Far So Good As Over 1.65 Lakh Get Covid-19 Jabs On Day One: Union Health Ministry 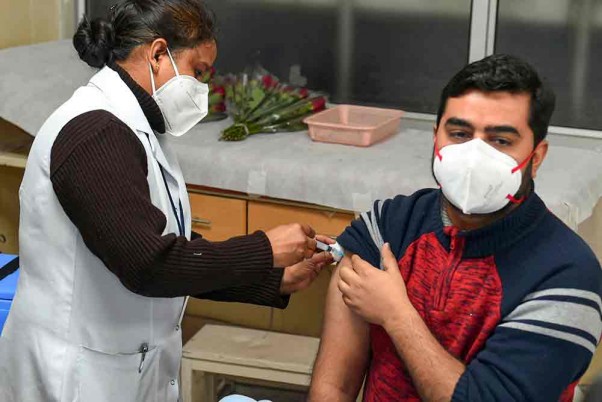 Over 1.65 lakh beneficiaries were inoculated with Covid-19 jabs at 3,351 session sites throughout the country on Saturday. Also, no case of post-inoculation hospitalisation has been reported so far, the government reported on the first day of India's massive vaccination drive against the virus.

During a press briefing, Additional Secretary in the Union health ministry Manohar Agnani said- the Covid-19 vaccination drive was successfully conducted on the first day.

"A total of 3,351 sessions were held wherein 1,65,714 beneficiaries were vaccinated, as per provisional reports," he said.

A total of 16,755 personnel were involved in organising the vaccination sessions, Agnani said.

Prime Minister Narendra Modi launched the vaccination drive while reassuring the country that emergency use authorisation was given to two made in India vaccines only after scientists were convinced of their safety and effectiveness, and urged people to beware of propaganda and rumours.

More than one crore cases and 1.5 lakh fatalities later, India took its first steps out of the pandemic with shots of the Covishield and Covaxin vaccines being administered at medical centres across the country.

Sanitation worker Manish Kumar became the first recipient of the vaccination drive at Delhi's All India Institute of Medical Sciences (AIIMS), according to the health ministry.