‘Get Patients To GMC Jammu If You Want Them Dead’

Advocate Ajay Pal Singh whose father was Covid-19 positive and died at GMC Jammu, took to social media to advise people not to take Covid-19 patients to the GMC Jammu. 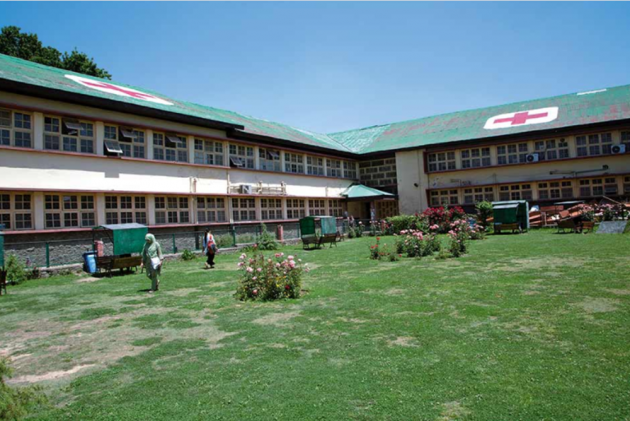 On May 14, the Bharatiya Janata Party put up a food stall outside the Government Medical College (GMC) in Jammu. The party wanted to distribute food packets to attendants of Covid-19 patients admitted to the hospital.

But the stall soon saw people assembling and objecting to the party’s banner. The gathered crowd protested against BJP holding it responsible for deaths taking place at the GMC Jammu.

Since May this year, the deaths taking place in the GMC Jammu are higher than any other hospital in Jammu and Kashmir. On average 60 people die of Covid-19 in different hospitals of Jammu and Kashmir but GMC Jammu is accounting for the highest number of deaths.

It is here in this hospital senior Hurriyat leader, Ashraf Sehari died on May 15 and the hospital refuses to provide details whether he was Covid-19 positive or not. “Please ask the police,” says the medical superintendent of the hospital.

Despite having infrastructure and human resources, the hospital is being described as a “dead house’ by those whose relatives died here.

20-year-old Kashish is one of the many who saw their relatives breathe their last at the hospital. Her grandfather Gian Chand was admitted to GMC Jammu on May 9 after his oxygen level dipped. She says they were waiting for his RT-PCR report when his oxygen level went down.

At GMC Jammu, she says, they were told to get a BiPAP machine, a non-invasive form of the ventilator for the patient. “We got the machine from the market at a very high price. But the technicians in the medical college did not know how to use it for the patient. Even after adjusting it inaccurately on my grandfather his saturation level started falling and he was complaining of suffocation,” she says.

She says on May 13, the doctors told them that the patient is not cooperating as he was complaining of suffocation. “Suffocation was due to faulty adjustment of the BiPAP machine. We asked them to put him on a ventilator. They didn’t show any response. Then he got unconscious for around four hours and there was no doctor or paramedic to check what happened to him till he died the next day,” says Kashish.  She says it would have better to suffer at home rather than hospitalising a loved one at GMC Jammu.

Advocate Ajay Pal Singh whose father was Covid-19 positive and died at GMC Jammu, took to social media to advise people not to take Covid-19 patients to the GMC Jammu. “If you want to see your patient dead then send him to the GMC Jammu,” he says.

The deaths in the GMC Jammu have compelled the government officials to regularly visit the GMC Srinagar. On May 16, the BJP leader and former health minister Sham Lal Sharma visited GMC Jammu and Lt. Governor Manoj Sinha visited the hospital several times.

The Centre has formed a three-member team that visited the region on Sunday to evaluate the condition of GMC Jammu and other hospitals in Jammu. The team will submit a report to the union government.  The panel formed by the union government of health and family welfare includes Dr Pranay Verma, Joint Director, Epidemiology, National Center of Disease Control (NCDC), Delhi, Dr Mahesh Waghmare, Microbiology Department, NCDC Delhi, and Dr Navneet Sharma, Professor, Department of Internal Medicine, Post Graduate Institute of Medical Education and Research (PGIMER), Chandigarh.

Dr Mahesh Waghmare says, after analysing the data they have found the number of deaths has been increasing for the past one month in Jammu as compared to Kashmir. “We wanted to find the reasons behind it. We wanted to know why mortality is high in Jammu. There are different Covid-19 variants in Jammu, like the UK, South African, and Indian variants. That might be one of the reasons why deaths are on the higher side as new variants are more infectious,” he says. “We will analyse it and accordingly we will give recommendations,” he says.

The government has issued an order directing principal GMC Jammu to ensure the presence of senior faculty in the college every day. Senior officials say more deaths are taking place in GMC Jammu than in other hospitals as patients are reporting very late. The doctors said patients who are getting admitted at GMC Jammu are in much more critical condition. The

GMC Jammu principal Professor Shashi Sudan told reporters in Jammu that a new variant of Covid-19 is spreading in Jammu. It is named as B1.617.2 variant and its positivity rate is 35 percent to 40 percent.

While doctors are trying to bring down the mortality rate, the regular visits of the BJP leaders to Jammu hospitals have angered other parties. National Conference seeks FIR to be registered against them and the People’s Democratic Party holds BJP responsible for the mess.

“Jammu is at the receiving end despite one of the MP from the region sitting in PMO. The party leadership is more interested in political theatrics rather than making any relevant changes on the ground which is evident from the recent visits of its leaders to hospitals,” says PDP leader of the region Firdous Tak. He accuses BJP of playing politics over dead bodies.

According to him, BJP is fearing a loss in popularity because of the massive number of Covid-related deaths in Jammu.

While the government issued directions to GMC’s senior faculty to remain present in the GMC hospital, no such directions have been issued in Kashmir.

“The reason deaths are low in Kashmir as compared to Jammu in spite of a higher number of Covid cases is the huge intervention by NGOs,” says a senior faculty member at the GMC Srinagar.

He says, in Srinagar, hundreds of oxygen cylinders and oxygen concentrators, thousands of oximeters, have been provided by NGOs to homebound patients, and in the hospitals, doctors don’t run away from Covid-19 patients. “I think that has made the difference,” the doctor says.