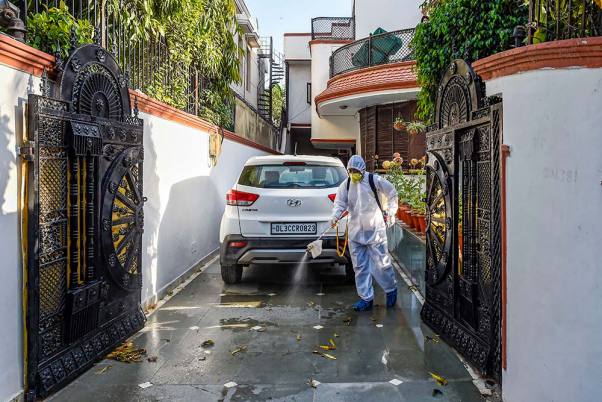 The number of Coronavirus positive cases in India continues to show a rapid spike even as the government is taking measures to curb the community spread of the virus. In the last 24 hours,  540 new positive COVID-19 cases were reported, taking the nationwide tally to 5,734, said the Ministry of Health and Family Welfare on Thursday.

The death toll has also risen to 166 after 17 new deaths were reported in the last 24 hours.

Eight deaths were reported from Maharashtra, three from Gujarat, two from Jammu and Kashmir and one each from Punjab, Uttar Pradesh, Karnataka and Tamil Nadu, it said.

Maharashtra has reported the most coronavirus deaths at 72, followed by Gujarat  at 16, Madhya Pradesh at 13 and Delhi at 9. Punjab and Tamil Nadu have reported eight fatalities each while Telengana has reported seven deaths.

West Bengal and Karnataka have registered five deaths each. Andhra Pradesh, Jammu and Kashmir and Uttar Pradesh have reported four deaths each while Haryana and Rajasthan have recorded three deaths each.

Two deaths have been reported from Kerala. Bihar, Himachal Pradesh and Odisha reported one fatality each, according to the health ministry data.

Maharashtra is the worst-hit state 1,135 positive cases so far and while Tamil Nadu is second with 690 positive cases. Delhi's tally has risen to 669 cases.

The governments in Uttar Pradesh and the national capital have decided to seal the Coronavirus hotspots. They have made the wearing of a face mask compulsory in public.

The cases have risen to 427 in Telengana, while Rajasthan has 381 cases.

Novel coronavirus cases have risen to 229 in Madhya Pradesh, 181 in Karnataka and 179 in Gujarat.

Thirty-eight people were infected with the virus in Bihar, while Uttarakhand has 33 patients and Assam 28.

Also Read: Why COVID-19 Outbreak In India's Slums Will Be Disastrous For The Urban Poor

Chandigarh and Himachal Pradesh have 18 cases each, while Ladakh has 14 positive patients so far.

Jharkhand has reported four cases, while Manipur, Tripura, Mizoram and Arunachal Pradesh have reported one case each.

"State-wise distribution is subject to further verification and reconciliation," the ministry said on its website.

Delhi, UP Seal Coronavirus Hotspots; Here Are The Areas To Be Locked Up