Balbir Singh Sidhu, the Punjab health minister, denied that there was any shortage of protective gear in Punjab. 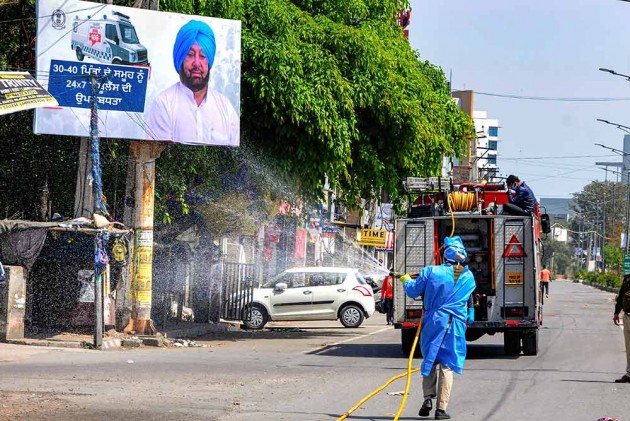 As coronavirus cases in India continue to rise, doctors at the frontline in Punjab say that they do not have enough protective equipment at work to safeguard against the deadly virus even after some of them have already been infected.

“The residents of Rajendra Medical College, Patiala & Govt. Medical College, Amritsar, like many others medical institutions across the country, are working in conditions that provide absolutely no protection against contracting the virus that knows no boundaries,” the Punjab chapter of the Resident Doctors Association said in a letter dated March 25.

The association stated in the letter that there are “no masks, gloves or sanitisers available, let alone PPE kits (personal protective equipment) for those working in the emergency.”

Meanwhile, two residents of the medical college hospital, Amritsar, have also been admitted in the isolation ward for symptoms of COVID-19.

So far, 38 confirmed cases of coronavirus have been reported in the state, with five new cases being reported on Friday.

“Examples of doctors working in these times, succumbing to the virus, seem to not have made an impact in this institution,” the association noted.

The letter illustrates how healthcare workers in Punjab risk contracting the virus themselves while battling the COVID-19 pandemic. Doctors from government hospitals across the state also say that they are facing a shortage of the essential equipment required to treat COVID-19 patients, such as PPE, decontamination suits, hazmat suits, and even basic sanitisers.

The hospitals are not equipped to deal with the outbreak, according to the doctors Outlook spoke to.

Balbir Singh Sidhu, the Punjab health minister, denied that there was any shortage of protective gear in Punjab. “We are the most equipped state in India talking about fighting the COVID-19 outbreak,”. He said, adding, “We have enough masks, sanitisers, PPE sets and ventilators. Health workers, including doctors, are getting everything, they need. Who says we are short of stuff?”

Sidhu had earlier acknowledged that the state can potentially see a high number of positive coronavirus cases.

On 23 March, Sidhu wrote a letter to Union Health Minister Harsh Vardhan, stating that ninety thousand non-resident Indians entered the state in the month of March.

“Many of them have symptoms of COVID-19 and are further spreading the disease through their contact/transmission,” Sidhu said in the letter. “We require more manpower, specialists, Anesthetics, Pulmonologists, doctors and nurses. We also require medicines, logistics, Ventilators and many other items. To meet these urgent demands and rise to the occasion to defeat this disease, Punjab State requires additional funds of minimum Rs 150 Crores from the government of India.”

When asked about the letter, Sidhu said that the money had been sought to further strengthen the existing healthcare system in the state, “for tackling the future viral infections post the COVID-19 outbreak.”

A doctor who works at Rajendra Medical College, Patiala, said on the condition of anonymity that the hospital staff is forced to use masks made from hospital bedsheets and these were “ordinary disposable masks which offer no protection in this viral infection.” Incidentally, Patiala is also CM Captain Amrinder Singh’s home town.

“For hospitals, Sub-standard sanitisers are purchased and diluted with water,” said a doctor at civil hospital, Ludhiana, on conditions of anonymity.

“Not all doctors require the N95 masks—only the ones in the isolation wards and those handling the COVID-19 positive patients require it. We are providing surgical and three-layered masks to the staff,” Doctor Manjit Singh, a civil surgeon based in Mohali, said.

A doctor who works at a civil hospital in Patiala pointed out that this is not an effective strategy. “How would we know if a patient is positive or not?” he said.

A private doctor based, also a senior office bearer of the Indian Medical Association, Punjab, said, “There is not a single ventilator in Nawanshahr and just one in the entire Tarn Taran district, which has a huge NRI population.” Before the outbreak, there were only 49 ventilators in government hospitals across the state and around three hundred in private hospitals, he said. “In case of a spurt from the current stage two, we would be overwhelmed due to the ill prepared health department in the state,” he added.

Bhagwant Singh, the vice president of IMA, Punjab, said the staff must be trained to wear and remove the kit properly, but “there has been no training so far.” Videos available online would be the only training tool for the medical staff in the state, he added. A PPE kit can be used for just six–eight hours and must be discarded after that. “A PPE kit does not allow you to answer nature’s calls and six hours is the maximum a person can control,” he said.