With the hashtag #RafaleChorChowkidar, the Congress targeted the Narendra Modi government over the Le Monde news report that alleged Anil Ambani's French firm got Rs1,000 crore tax liability waiver from the French government at the time the Rafale deal was being negotiated in 2015. 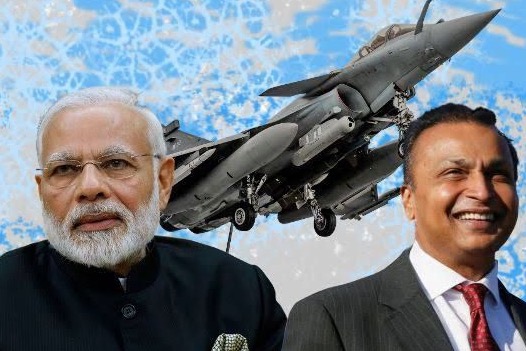 The Congress on Saturday alleged connivance, crony capitalism and corruption in the Rafale deal as it latched on to a news report by leading French daily Le Monde alleging that Anil Ambani's French firm got a 144 million euros ($162 million) tax waiver from France as India was in talks for the purchase of 36 of the fighter jets in 2015.

With the hashtag #RafaleChorChowkidar, deliberately targeting the Chowkidar tag of Prime Minister Narendra Modi and the BJP ministers and leaders, the Congress alleged that more skeletons were tumbling out of the Rafale scam closet.

The party alleged that PM Modi “has been working to save money for Anil Ambani while paying a higher price for the Rafale aircrafts from taxpayers' pockets”.

Here's the truth: PM Modi has been working to save money for Anil Ambani while paying a higher price for the Rafale aircrafts from taxpayers' pockets.#RafaleChorChowkidar pic.twitter.com/dwbNRMXGuu

Congress leader Randeep Surjewala alleged “Layers of Connivance, Crony Capitalism & Corruption are now exposed in the Rafale Scam,” tagging his press conference that was held Saturday on the latest expose.

Top French daily Le Monde in a report said that the French government waived dues of over 140 million euros (Rs 1,000 crore) owed by Anil Ambani at the time the deal for 36 Rafale jets was being negotiated in 2015.

The report said “Anil Ambani, a close friend of Prime Minister Modi, benefited from a cancellation of more than 140 million euros in 2015, when Dassault negotiated the sale of Rafale to India”.

The author of the report Julien Bouissou, South Asia correspondent of Le Monde, tweeted that “between February and October 2015, while the French were negotiating the Rafale contract with India, Anil Ambani enjoyed a tax waiver of 143.7 million euros ($162 mn) from the French state. Quite a cozy deal, right?

Six months after Modi's Rafale announcement, the French tax authorities accepted 7.3 million euros from Reliance as a settlement, instead of the much bigger sum of 151 million euros.

Congress chief Rahul Gandhi has consistently been attacking the Modi government over the Rafale deal,  alleging massive corruption in the deal. The government has denied the allegations.

In its reaction, Reliance Communications rejected any wrongdoing and said the tax dispute was settled under legal framework which is available for all companies operating in France.

The defence ministry in a statement termed the news as "totally inaccurate" and a "mischievous attempt to misinform".

CPIM leader Sitaram Yechury in a tweet said the latest revelations showed that public money was being used by the Modi government to  "pay exorbitantly more for far fewer Rafale fighters than required, to benefit a crony businessman" through the defence deal and French tax benefit.

So, our public money is used by Modi govt to pay exorbitantly more for far fewer Rafale fighters than required, to benefit a crony businessman through the defence deal and French tax benefit. No wonder BJP introduced secret Electoral Bonds for party funding, legalising corruption https://t.co/zyMEqtFGAV

So, after French PM Hollande confirmed that Ambani was chosen as Dassault's offset partner for the Rafale deal on Modi's orders, it transpires that French authorities waived off 143M euros (>1000Cr) of tax liability from Ambani's French Company! Chowkidar's crony is a lucky guy! https://t.co/3HmE1vRhsk

The latest revelations come as Finance Minister Arun Jaitley targetted the Opposition, saying  it had "wasted the past two years"  in “manufacturing issues” which didn’t exist. "The Rafale or the EVM proved to be fake issues only."

To oust a popular govt. an extremely popular Prime Minister, you need real issues not fictional ones. The Opposition wasted the past two years in the run-up to the poll “manufacturing issues” which didn’t exist. The Rafale or the EVM proved to be fake issues only.