Backed by Priyanka, the Congress leadership has instructed all state units to organise protest rallies and sit-ins on January 15 to mark Kisan Adhikar Divas. 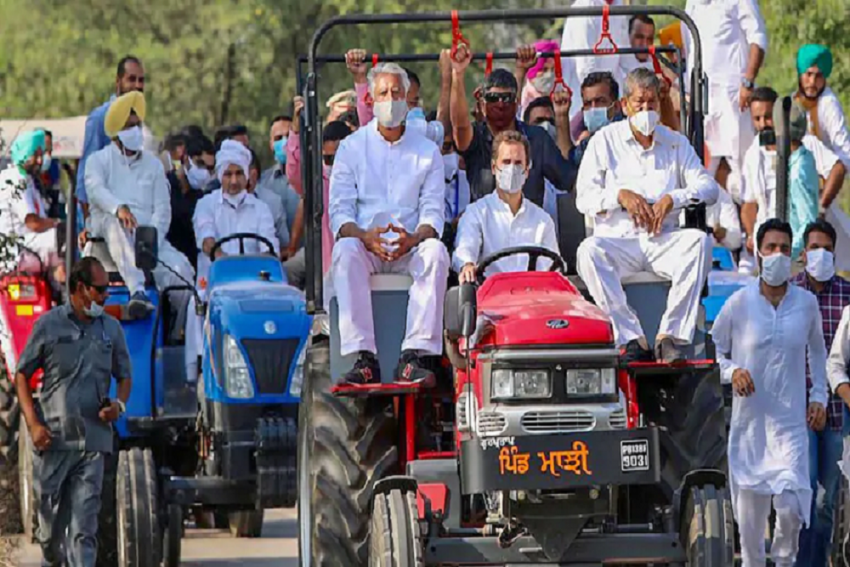 The Congress party will, on January 15, launch a nationwide protest in solidarity with the farmers who have been agitating against the three central farm laws for over a month. The party’s decision to take to the streets demanding the repeal of the three laws comes a day after the eighth round of talks between representatives of farmer unions and central ministers ended in yet another stalemate after the government appeared to harden its stance in favour of the controversial legislation. The Congress’s protest will coincide with the next round of talks between the Centre and the agitating farmers.

After Friday’s talks between the Centre and farmers failed to end the ongoing deadlock, interim Congress president Sonia Gandhi had instructed party general secretaries and leaders to discuss her party’s future strategy on the farmer protests. Congress general secretary (organisation) K.C. Venugopal held a virtual meeting with her party colleagues, on Saturday morning, to discuss the ongoing farmers’ protest that has also witnessed the death of at least 60 farmers in the past month.

Party leaders, including Priyanka Gandhi Vadra, who logged in for Saturday’s virtual meeting agreed that though the agitating farmers have been maintaining a safe distance from Opposition politicians eager to join them at Delhi’s Singhu, Tikri and Ghazipur borders, it was “incumbent on the Congress as the main Opposition party to be seen standing in solidarity with the country’s annadatas”, a leader who joined the meeting said.

The Congress, along with several other Opposition parties, had opposed the three farm laws when they were passed by Parliament during the monsoon session. Ever since the Congress has maintained that the only way for the government to end the impasse with the agitating farmers is to withdraw the three legislations. The agitating farmers, however, do not wish their agitation to be called out as a “politically propped up protest” by the BJP-led central government and have, thus, told Opposition leaders to keep their respective party cadres away from the key agitation hotspots surrounding Delhi. A group of Congress lawmakers have been sitting on a parallel protest, in solidarity with the farmers, at Jantar Mantar.

Stating that the farmer agitation is a “turning point” in the country’s current political landscape, chief Congress spokesperson Randeep Surjewala told media persons, “The Congress party is duty-bound to stand with the farmers of the country… it has been decided that the party will observe January 15 as Kisan Adhikar Divas… Congress delegations in every state and union territory will gherao the Raj Bhawan and protest demanding the repeal of these black laws.”

Surjewala said that the Narendra Modi government is “trying to frustrate and tire out the agitating farmers as part of a conspiratorial plan by giving representatives of farmer unions a new date for discussions after every round of talks… over 60 farmers have lost their lives so far during the protest and the Prime Minister has not uttered a single word of sympathy and solidarity… Narendra Modi is directly responsible for these deaths.”

The Congress leadership has instructed all state units to organise protest rallies and sit-ins on January 15 to mark Kisan Adhikar Divas. In-state capitals, local leaders of the party will conduct rallies that will culminate with a gherao of the Raj Bhawan demanding repeal of the three farm laws.

The party’s key frontal organisation, the Indian Youth Congress (IYC), has also launched a nationwide program – Ek Muthi Mitti Shaheedo Ke Naam – “to pay tribute to the martyrdom” of the over 60 farmer who have so far lost their lives during the protests. IYC members across the country will organize a series of rallies and demonstrations to highlight the “injustice that the three farm laws will inflict upon crores of Indian farmers,” IYC national president Srinivas B.V. told Outlook, adding that Youth Congress volunteers will also “visit villages of the martyred farmers and collect a fistful of soil as a show of solidarity with the farmers.”