If BJP can garner support from the Independents, it will not need JJP's support to form government. 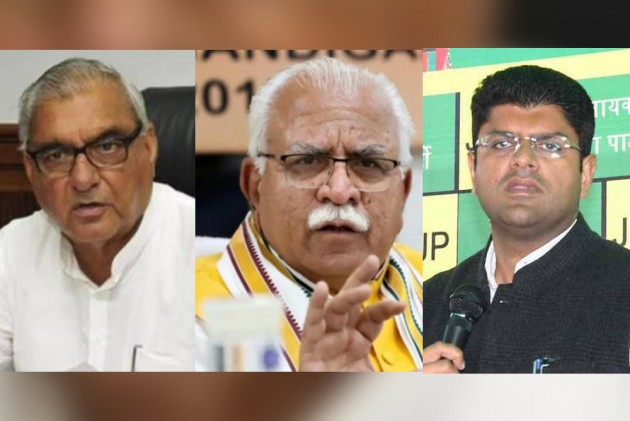 The hung assembly in Haryana has triggered a feeding frenzy among both BJP and Congress leaders as Haryana Chief Minister M L Khattar and his Congress rival Bhupinder Singh Hooda rushed to New Delhi on Friday to meet the top brass of their respective parties.

Both the BJP and the Congress are making desperate efforts to woo the Independents and the smaller parties to create post-poll alliances that would take their numbers beyond the halfway mark of 46 in the 90-seat assembly.

The BJP emerged as the single largest party with 40 seats whereas Congress managed to bag 31 seats. With no real clear winner, the seven Independents and the INLD-breakaway Jannayak Janta Party with 10 seats can be kingmakers in the state.

Besides, one seat each was secured by Haryana Lokhit Party and the INLD.

Based on the way the Dushyant Chautala-led JJP swings, any of the main two parties can come to power. With JJP’s 10 seats, BJP will easily cross the halfway mark while the Congress would still need the support of five more victors—Independents or smaller parties.

Even though Chautala told the media that people of Haryana want a change, he maintained suspense as to who his party will support.

Congress has been trying hard to shore up support of the independents and JJP. Even as results started pouring in on Thursday afternoon, both former Haryana CM and senior Congress leader Bhupinder Singh Hooda and his son Deepinder Hooda have called for the formation of a coalition government by all the opposition parties.

Former state Congress chief Ashok Tanwar went as far as saying Chautala should be made the chief minister.

Speaking to the Hindustan Times, Chautala said, “We have not decided on that front [of supporting BJP] at all. I have no such plans of supporting.”

However, in a development that may cast shadow on the Congress’ hopes, Haryana Lokhit Party leader Gopal Kanda, who has won the Sirsa seat, Friday claimed he and other Independents have "decided to extend unconditional support to the BJP".

With the support of the Independents and Kanda, BJP would not need JJP’s backing.

"The BJP will form government in Haryana and it will work for the overall development of the state. Most independents are supporting us," claimed Subhash Barala who has offered to step down as Haryana BJP chief.

Kanda and Independent winner Ranjeet Singh were taken to Delhi in a chartered plane by Sirsa MP Sunita Duggal. They told the media before boarding the plane that they will support the party which will work for the development of Sirsa.

Khattar, who reached Delhi Friday morning, is meeting the Independents in Haryana Bhavan and will also meet top BJP leaders over the formation of government, as per PTI sources.

On the other hand, Hooda will meet Congress president Sonia Gandhi and senior leader Ghulam Nabi Azad to strategise the party’s move.

While former MP Deepinder Singh Hooda said the Independents were in touch with the Congress, party insiders told the PTI that the Congress is awaiting the decision of the JJP to extend its support to it before working out a deal with Independent MLAs.

While the Congress is keen to have a 'mahagathbandhan' led by it in Haryana, it does not want a repeat of the Karnataka model where it had to give the post of chief minister to a minor ally.