All trains to Assam and Tripura have been cancelled along with most flights in the region amid intensifying protests. 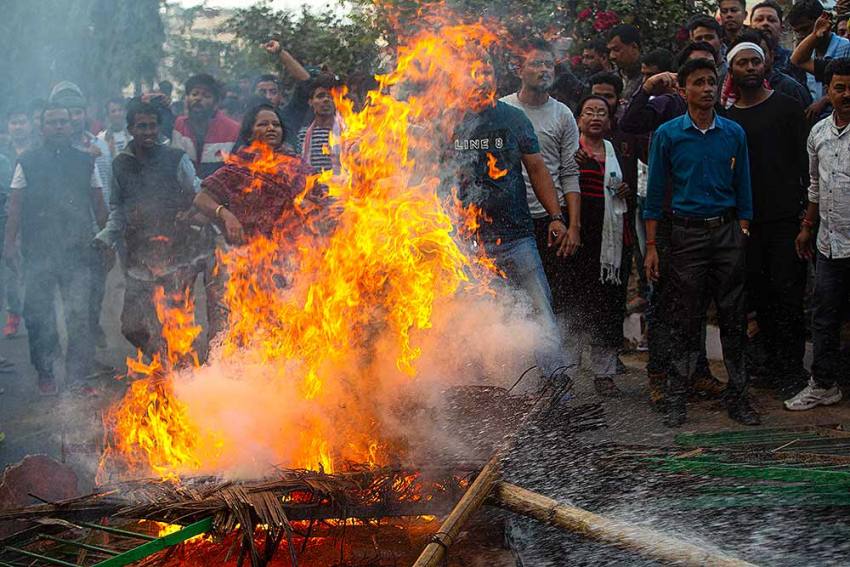 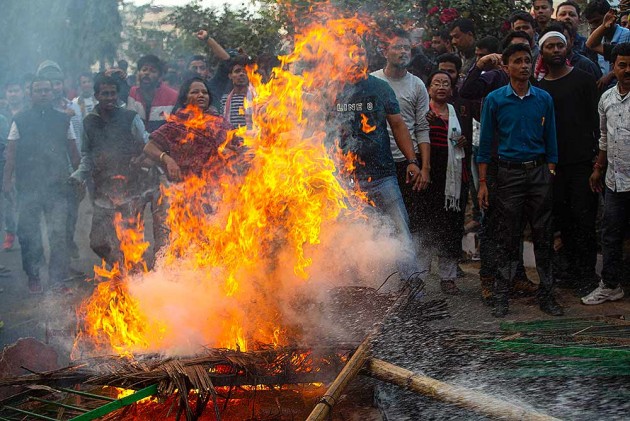 Northeastern states Assam and Tripura have been on the boil since Wednesday night after the politically sensitive Citizenship (Amendment) Bill was passed in the Parliament. The Army was deployed in Assam after protests turned violent. Half-a-dozen vehicles were burnt by protesters while the houses of BJP and AGP leaders were also attacked.

Guwahati, the epicentre of anti-CAB protests, was placed under indefinite curfew on Wednesday night while the Army was called in at four places after agitations broke out across the city. Internet has been shut down in 10 districts in Assam and curfew imposed in Guwahati and Dibrugarh.

Assam Rifles personnel were also deployed in Tripura as the northeastern state plunged into chaos over the Citizenship (Amendment) Bill or CAB which seeks to give Indian citizenship to non-Muslim refugees from Bangladesh, Pakistan and Afghanistan.

6:25 PM: A civilian, Dipanjan Das, succumbed to bullet injuries at Gauhati Medical College and Hospital. He was injured in police firing during protests.

5:31 PM: Internet services have been snapped across the state of Assam.

4:25 PM: Pakistan should focus on its treatment of minorities rather than commenting on India's internal matter, says MEA  spokesperson.

4:16 PM: "He has given his explanation on cancelling his visit. Our relationship is strong. As leaders of both the countries have said; this is the golden age of our relations," Raveesh Kumar on Bangladesh Foreign Minister cancelling his India visit.

4:10 PM: "Every nook and corner in Assam is erupting in spontaneous protests against the black bill. The people of Assam are determined to defeat this divisive and unconstitutional tool called CAB. We will not relent till it is scrapped," said Prafulla Kumar Mahanta, two-time Assam CM and Asom Gana Parishad leader.

3:30 PM: Assam CM Sarbananda Sonowal said, "I assure that PM Modi and Home Minister Amit Shah have very categorically stated the centre is committed to implementing the Clause 6 of Assam Accord in letter and spirit to ensure the constitutional safeguard to the people of Assam politically and culturally."

"I've a firm belief that people of Assam, as usual, will maintain peace for all time to come," he added.

2:57 PM: Bangladesh Foreign Minister A K Abdul Momen cancels his visit to India due to the prevailing situation in the Northeast.

2: 25 PM:  Hundreds of passengers remained stranded at the Guwahati airport on Thursday due to indefinite curfew and Internet clampdown in the city.

2:20 PM: "In the wake of Citizenship Bill that has been passed in both the Houses of Parliament, the entire northeast region is in turmoil. Already the Army has been deployed, internet services have been discontinued. Kashmir phenomena have been replicated in the northeast region," Congress MP Adhir Ranjan Chowdhury said in Lok Sabha.

2:14 PM: Suspension of internet services in Assam has been extended for the next 48 hours. Internet was suspended for 24-hours on Wednesday evening in 10 districts of the state including Dhemaji, Dibrugarh, and Kamrup among others. Authorities said this was done to prevent misuse of social media to "disturb peace and tranquillity of the state."

2:05 PM: Assam's Home department has transferred Guwahati commissioner of police and a few top officials for failing to control the tensed situation in the state.

2:00 PM: "There are attempts to fuel tensions in the Northeast region. Most of the region is out of the ambit of this bill but politics of Congress and its allies depends on illegal immigrants," PM Modi says at a Jharkhand election rally.

"Central Govt will work with state Govts for your (people of Assam) development. Don't be misled by Congress's statements," he added.

1:50 PM: Assam Police said they had to open fire in Lalung Gaon area in Guwahati after stones were hurled by protestors who were defying curfew. The Police said it was idle firing but agitators claimed that at least four persons were injured in the shooting.

1:40 PM: The 24-hour shutdown, called by Youth Congress to protest against the police lathicharge on their activists agitating against CAB, saw a partial response on Thursday.

12:50 PM: Congress was instigating violence in the region and the government condemns it, said Parliamentary Affairs Minister Pralhad Joshi after the Congress raised the issue in Lok Sabha saying the entire region was in flames barring a few places.

12:30 PM: AAP MP Sanjay Singh has given 'Suspension of Business Notice' in Rajya Sabha under rule 267 over the protests against CAB in the Northeast.

12:19 PM: The Information and Broadcasting Ministry has directed all private TV channels to be cautious in airing content that can incite violence amid protests in Northeastern states.

The Ministry said, "It is reiterated that all TV channels are advised to be particularly cautious with regard to any content which is likely to encourage or incite violence or contains anything against maintenance of law and order or which promotes anti-national attitudes."

12: 10 PM:  Assam Chief Minister Sarbananda Sonowal says, "I appeal to the people to maintain peace and not get misled."

12:00 PM: Shiv Sena leader Sanjay Raut said, "In Rajya Sabha, the Home Minister said that the situation across the country is normal, but it does not appear to be normal. Before the Citizenship (Amendment) Bill was tabled in the Parliament, the emotions of North Eastern people were not gauged and properly communicated."

11:45 PM:  "My uncle's shop was set on fire and the boundary wall of my house was also damaged by protestors last night around 11 pm. I appeal to the people of Assam to maintain peace." said Union Minister and BJP MP from Assam's Dibrugarh, Rameshwar Teli.

11:30 PM: Several airlines, including IndiGo, Go Air, Vistara and SpiceJet, have announced that flights to Guwahati and Dibrugarh have been cancelled on Thursday and Friday and passengers travelling to these two cities will be offered a waiver on cancellation or rescheduling fee.

11:00 AM:  PM Narendra Modi tweeted: "I want to assure my brothers and sisters of Assam that they have nothing to worry after the passing of #CAB. I want to assure them- no one can take away your rights, unique identity and beautiful culture. It will continue to flourish and grow."

10:45 AM:  Railways has suspended all passenger train services in Tripura and Assam and short-terminated long-distance trains to the region from Guwahati following protests in the two states.

After a railway station in Dibrugarh's Chabua was set on fire by protestors late Wednesday night and the Panitola railway station in Tinsukia district was torched, 12 companies of the Railway Protection Special Force (RPSF) have been dispatched to the region.

10.30 AM: Assam's students' body AASU and peasants organisation KMSS have asked people to step out of their homes at 11 am

10:00 AM: Army conducted a flag march in the city on Thursday morning even as protesters defied curfew to take to the streets in Assam's capital Guwahati.

'No One Can Take Away Your Rights': PM Modi Tells Assam Amid Protests Against Citizenship Bill