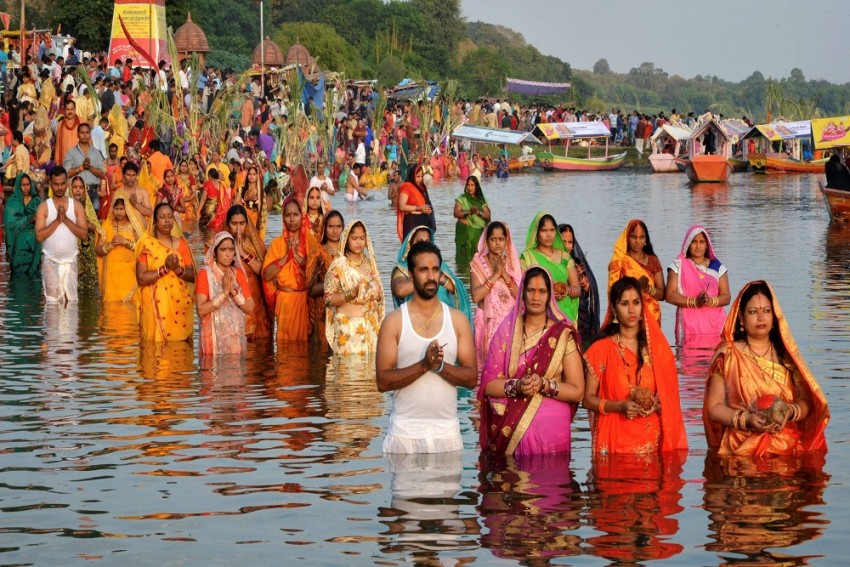 After the Diwali festivities, Chhath Puja celebrations are set to begin from tomorrow onwards, where religious ceremonies and rituals will be performed at the banks of rivers, ponds and other waterbodies.

This festival is celebrated with joy and enthusiasm, especially in North India. It is a major festival of states like Bihar, UP, Jharkhand. However, due to the ongoing pandemic, this year's celebration won't be the same.

Many states have placed a ban on the congregation and religious rituals citing Covid spread.

No Chhath Puja At Public Places In Delhi Due To Covid-19: Panel

Here is a list of States that recently issued guidelines for Chhath Puja celebration at public places:

According to the guidelines issued by the State Disaster Management Committee, no one would be allowed to organise any musical or cultural programme near the waterbodies during the Chhath festival.

Further, the decorative lights at public places and bursting of firecrackers have been forbidden this time.

The committee had said that the practice of taking bath in one waterbody by a group of people could increase chances of virus transmission. Shops and stalls that were earlier placed near the waterbodies won't be permitted this year.
It also disallowed placing of barricade or earmarking of areas for the purpose of performing Chhath puja.

Odisha government has prohibited mass celebration of Chhath Puja including bathing at river banks, in the wake of the Covid-19 pandemic.
In an order issued by Chief Secretary A K Tripathy on Monday, the state government said since a large number of people congregate near the river banks in keeping with the rituals, celebration of the festival has huge potential for Covid spread

Patna is gearing up for grand preparations for the Chhath Puja celebration. Work in Sanjay Gandhi Biological Park has been speeded up for the festival. Lake has been cleaned and the devotees will only be allowed to enter the lake region with proper barricading to practice social distancing. The state is lightened up with several decorative lights to mark the celebration.
Bihar government also issued guidelines to committees, civic units, ward councilors, three-tier panchayat representatives and other top dignitaries to curb the spread of Covid-19. Following social norms like wearing masks and social distancing will be mandatory.

The Delhi Disaster Management Authority (DDMA) in an order last week had directed officials to ensure that Chhath Puja is not performed at river banks, temples and other public places.
It had asked district magistrates and deputy commissioners of police to encourage people to celebrate the festival at their homes. However, few committees opposed the ban and asked the government to lift the ban, citing the reason for paying obeisance to the Sun god from a water body, which won't be feasible at home.

Chhath Puja festivities begin with the Nahay Khay ritual on the Chaturthi Day (fourth day) as per the traditional Hindu Calendar, which will be on Wednesday.