Addressing students at IIT Jodhpur, Venkaiah Naidu said that there was nothing wrong with changing parties but it should not be done just for the sake of power. 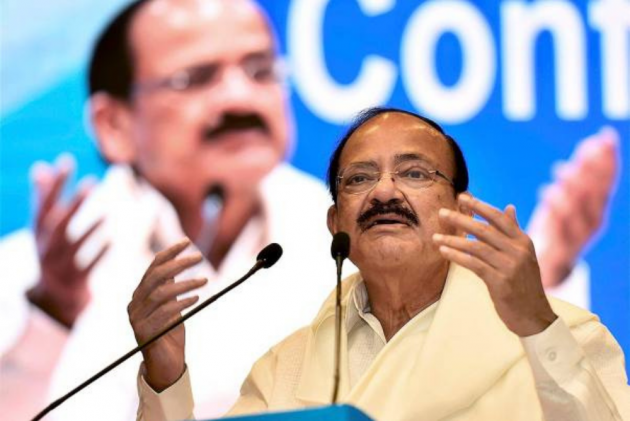 In an interaction with students in Rajasthan, Vice-President Venkaiah Naidu on Tuesday encourage youth to join politics but warned them to stay away from 'politricks'. Addressing students at IIT Jodhpur, Naidu said that there was nothing wrong in changing parties but it should not be done just for the sake of power.

Join a party of your choice, work as a team, inculcate a spirit of competitiveness and do value-based politics, he said.

The VP also stressed the need for value-based politics while citing declining standards in Parliament and state legislatures.

"We see people frequently changing parties like children change their clothes. Nothing wrong in changing parties but you should not change the parties for the sake of power. This is what is happening and this is a matter of concern," he said.

For politics, 4Cs--character, capacity, conduct and caliber—are required, he said.

Unfortunately, in our political system, some people have replaced these 4Cs with cast, community cash and criminality, he said.

He called upon the youth to select a candidate on his character, caliber, capability and conduct and not simply because he belongs to a certain community.

"No leader can serve one community. There are so many communities and you should aspire to become a leader of the people not a community," he said.

Describing nationalism, the Vice-President said it is not a mere slogan.

We must develop a national outlook, which means people’s welfare irrespective of caste, creed, sex and religion, he said.

Later in the day, Naidu laid the foundation stone of an "artificial intelligence of things laboratory" at the IIT and also inaugurated the Jodhpur City Knowledge and Innovation Cluster (JCKIC) there.

"The objective of science and technology is to improve the lifestyle of people and this should also be the sole objective of the AI," he said.

Terming the AI as the most important necessity of future, Naidu said such transitional technologies should be employed in public welfare and improving the life of the common man.

While talking about the JCKIC, he said educational institutions should become centres for innovation and called upon the IIT administration to share their experiences and best practices with other institutions.

Naidu called upon everyone to abide by the Constitution and create awareness among the masses about it, according to a release.

Terming the Constitution supreme, the vice-president said it gives the people rights and also teaches about duty.

He described the Constitution as sacred as the scriptures and stressed upon all to be loyal to it.

He said the Indian culture is diverse with no distinction based on caste, creed, language and religion.