India made two crucial changes to its Covid treatment protocol, both were prompted by the research done in the UK and published in the reputed medical journal 'The Lancet'. 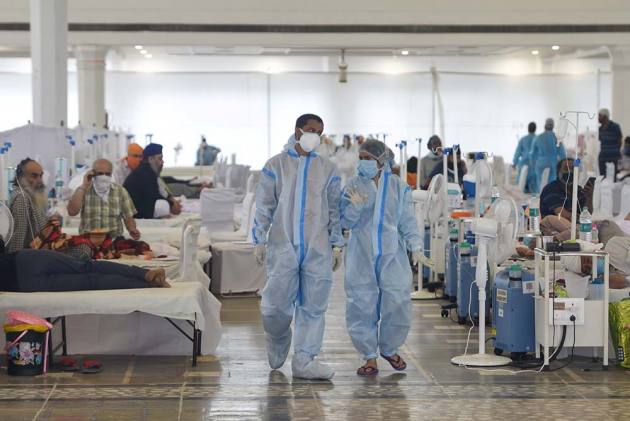 In order to combat the menace of Covid-19, the Ministry of Health & Family Welfare took two crucial decisions within a week. First, it increased the gap between two doses of the Covishield vaccine —from 6 to 8 weeks to 12 to 16 weeks—and, second, it dropped plasma therapy from the Covid-19 treatment protocol.

Both the decisions were prompted by the research done in the UK and published in the reputed medical journal 'The Lancet'.

The Health Ministry on May 13 in a press release admitted, “Based on the available real-life evidence, particularly from UK, the Covid-19 Working Group agreed for increasing the dosing interval to 12-16 weeks between two doses of Covishield vaccine. No change in interval of Covaxin vaccine doses was recommended.”

Dr V K Paul, Member, NITI Aayog, who is also the chairman of the National Expert Group on Vaccine Administration for Covid-19 (NEGVAC), in a press conference on May 15, 2021, said that his team got confidence after the United Kingdom followed the protocol of maintaining a three-month gap between the first and second dose of Covishield and found the vaccine is effective from 60% to 80% in disease prevention.

Dr Paul also talked about the data that was assessed in the UK and said, “Broadly speaking, this is their assessment and synthesis and its detail is available. On the basis of that, our committee got the confidence to take this decision.”

He didn’t provide any data analysed in India despite vaccinating over 18 crore population. Interestingly, ‘The Lancet’ had published this UK study on February 19 in which it said that if the two doses were spaced from 8 to 12 weeks apart, the protection went up from 55 percent to above 80 percent.

In another decision on May 17, the Indian Council of Medical Research (ICMR) removed the plasma therapy from the treatment protocol just a couple of days after Lancet published its study, known as the Randomised Evaluation of Covid-19 Therapy or the RECOVERY trial, that was conducted in the UK.

The study conducted on 13000 odd patients for a period of six months suggested that it doesn’t improve the chances of survival of a critical patient.

The ICMR had done a similar study in India on 450 odd patients in October last year and found that “Convalescent plasma was not associated with a reduction in progression to severe Covid-19 or all-cause mortality.”  But it didn’t remove plasma therapy from the treatment protocol then.

Health experts expressed their disappointment over the fact that this is not for the first time the Health Ministry took decisions on the basis of research done abroad.

They say that every decision with respect to managing Covid-19 has been taken based on the research done in the UK, the USA, or other European countries or the research papers published in The Lancet.

From the inclusion of drugs like Remdesivir, Dexamethasone, Tocilizumab, etc to our treatment protocol to the exclusion of Hydroxychloroquine, plasma therapy, etc —every decision has been prompted by studies in the West.

“We are intellectually still slaves to the West even today after 74 years of independence. Where have our scientists and researchers disappeared,” Dr Rahul Bhargava, a noted hematologist at Fortis Hospital, Gurugram said.

He added, “Since the Covid-19 hit the country, we haven’t done a single research based on which we can make a decision. Let the fact alone, we haven’t been able to publish the clinical trial data of our indigenous vaccine, Covaxin.”

“Thousands of people lost their lives in the second wave but still don’t know which variant of the virus is responsible for this,” a senior doctor working in a government hospital said.

Dr Syamal Roy, a noted immunologist, who retired as the Head of the Department of Infectious Diseases and Immunology, Indian Institute of Chemical Biology, Kolkata, blamed the government for not providing enough funds for research in India.

“During UPA tenure, researchers could get funds satisfactorily for studies and innovations but the current government doesn’t focus on research at all. We have eminent scientists but if we don’t provide money for research what will they do?” Dr Roy asked.

Many health experts believe that the deplorable status of research is the real issue behind India’s tragic situation during the second wave as the Indian SARS-CoV-2 Genomics Consortium (INSACOG), constituted to find out new variants of the virus, were not provided adequate funds on time.

Dr Thekkekara Jacob John, a well-known virologist and veteran vaccine researcher, says that India is not fighting against Covid-19 but it is tolerating it as Indians are culturally tolerant people.

“200 years ago, a small company called East India Company colonised us because they realised that there were not more foolish people in the world than us. They saw that we were gullible, unable to work together and betray even our closest people for money,” Dr John said.

“Imitators and improvisers will never be inventors and innovators,” he said.