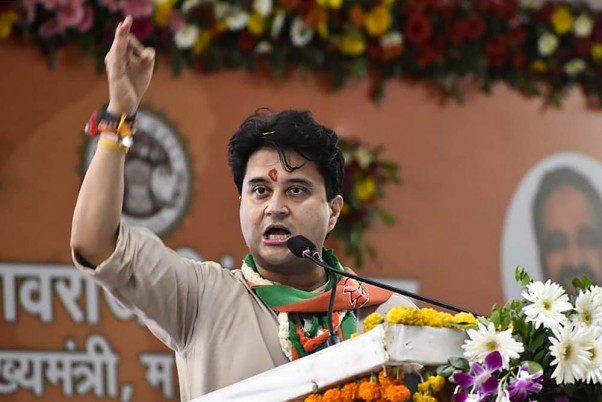 Powering the BJP to a big win in the Madhya Pradesh bypolls, Jyotiraditya Scindia on Tuesday said the results show that the people of the state consider Congress leaders Kamal Nath and Digvijaya Singh to be "the biggest traitors".

Out of the 28 Assembly seats in the Madhya Pradesh bypolls, the BJP has won 16 seats and was leading on at least three more seats at 10.25pm, as per the latest results, after a high-decibel campaign that saw a no-hold-barred battle between Scindia and his former colleagues from the Congress.

Scindia thanked the people of Madhya Pradesh for reposing their trust in the BJP in Madhya Pradesh and asserted that the credit for it first goes to the "sterling" leadership of Prime Minister Narendra Modi, party president J.P. Nadda and home minister Amit Shah.

Asked what he would like to say to Kamal Nath and Digvijaya Singh after this emphatic win, Scindia told PTI, "I have nothing to say to them because the people of Madhya Pradesh have told them quite a lot by this verdict."

"It is very clear that if there are any traitors in Madhya Pradesh, the people of Madhya Pradesh deem, Mr Digvijaya Singh and Mr Kamal Nath, the duo, as the biggest traitors of Madhya Pradesh and that is quite apparent in the verdict that has come out in this election. The people have spoken," the former Union minister said.

On former chief minister Digvijaya Singh's claim that the electronic voting machines (EVMs) can be hacked and tampered with, he said what can one do with people who do not have faith in democracy?

"If you don't accept people's verdict, people will continue to cast you aside and that is the lesson people like Mr Digvijaya Singh and the Congress need to learn," he said.

Scindia also hailed the state leadership of the BJP, including Chief Minister Shivraj Singh Chouhan and state unit chief V.D. Sharma, and said everyone worked as one single unit to make this result possible.

Credit for the result must also go "fully and completely" to every single worker on the ground who worked as if it was his or her own election, he said.

"I find it my privilege and my honour to work in an organisation that works unitedly with a single-minded purpose as the Bhartiya Janata Party does and so, therefore, credit (must go) to the organisation and the leadership and a great thanks to the confidence reposed in us by the people of Madhya Pradesh," he said.

By-elections were necessitated after 22 rebel Congress MLAs, loyal to Scindia, resigned from the party in March this year leading to fall of the 15-month-old Kamal Nath government in Madhya Pradesh. Later, three more MLAs resigned and joined BJP, while further three seats fell vacant due to the death of sitting MLAs.