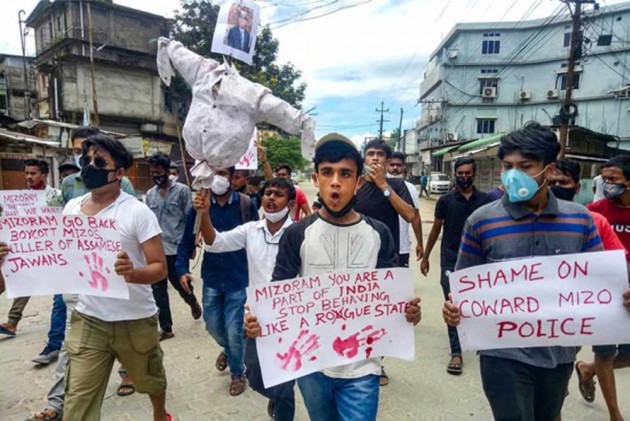 A Meghalaya minister has hailed the “spirit” of Mizoram Rajya Sabha MP K Vanlavena, who on Wednesday threatened that the next time Assam Police personnel enter the state, they all will be killed without exception. The minister also asked the Meghalaya Police to emulate their Mizoram counterparts when it comes to protecting the state’s borders with Assam.

“This is the spirit we should also inculcate to protect our borders, we need to be aggressive,” Sanbor Shullai, the newly-inducted BJP minister in the Meghalaya coalition government led by Chief Minister Conrad Sangma, said.

Earlier, the Assam Police served a notice to Vanlavena and asked him to appear at the Dholai police station in Cachar district on August 1. A police team visited Delhi on Friday but could not trace him.

"More than 200 policemen entered our territory and they pushed back our policemen from our own posts and they gave firing orders before we fired. They are lucky that we didn't kill them all. If they come again, we shall kill them all," he reportedly said outside Parliament on Wednesday.

The Assam Police has viewed Vanlavena’s statement as indicative of his role in the incident on July 26 at Lailapur in Cachar district at the Assam-Mizoram border in which six Assam Police personnel were killed and 41 others injured in firing by their Mizoram counterparts over the border dispute between the two states.

Shullai said the people of Mizoram had shown “guts” and they and the police got together to protect their borders. “We should also act in a similar manner when Assam policemen harass our residents at the border. We cannot go on only talking and having tea,” he told media persons.

Asked if he supported violence, Shullai said what else could one do if one’s enemy attacks. “If your enemy comes to your house and attacks your wife and children or steals and robs, you have to act in self-defence whether via legally or illegally,” he said.

He further said that the state police should be in front of the civilians and not the other way round as has been happening. “They cannot be allowed to cross the line of control,” he said.

Meghalaya and Assam chief ministers held a meeting on July 23 to discuss the long-pending border dispute. They have decided to go beyond status quo to resolve the issue. Both are scheduled to meet again on August 6. They have said that if required they would visit the areas to take stock of the situation on the ground.

Assam Chief Minister Himanta Biswa Sarma had said there was no point clinging on to history and, instead, there was a need to be realistic.