Reshuffle In BJP, Ram Madhav Is No Longer A General Secretary

The biggest makeover is seen at the national general secretary level with Muralidhar Rao and hitherto General Secretary Ram Madhav being dropped along with Haryana in-charge Anil Jain and Saroj Pandey. 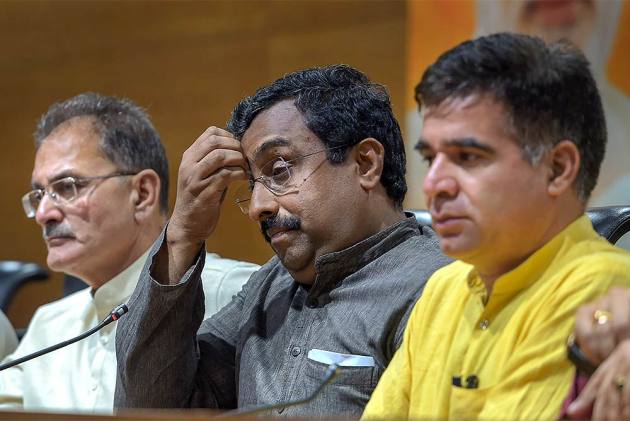 BJP President J.P. Nadda effected a major reshuffle in his team of office bearers, nine months after taking over as the party chief. In a major rejig in the team that he inherited from his predecessor Amit Shah, Nadda has tried to put his personal stamp of administration, while retaining some key people from the old team.

Re-imposing faith in party’s IT and social media in-charge, Nadda has retained Amit Malviya in the position. Young MP from Bangalore (South) Tejasvi Surya has also been rewarded and made the President of Bharatiya Janata Yuva Morcha (BJYM) replacing Poonam Mahajan.

The biggest makeover is seen at the national general secretary level with Muralidhar Rao and hitherto General Secretary Ram Madhav being dropped along with Haryana in-charge Anil Jain and Saroj Pandey. Those who have been accommodated as general secretaries include NTR’s daughter D. Purandeswari, Tarun Chugh from Punjab and Dilip Saikia from Assam.

Sources say that some of the former office bearers have been removed since the party wants to follow its “one man one post” credo. In this category among the vice presidents are Shivraj Singh Chouhan, who went back to Madhya Pradesh as the chief minister, Vinay Sahasrabuddhe and Prabhat Jha, who are both Rajya Sabha MPs. However, this too seems to have been selectively followed with Bhupendra Yadav remaining as the general secretary despite becoming Rajya Sabha member.

In an indication of how important messaging is for the BJP, the team of national spokespersons has been expanded from 10 to 23. While some like Meenakshi Lekhi and GVL Narasimha Rao have been removed from the panel, Sanjay Mayukh from Bihar, Rajyavardhan Singh Rathore, who lost out on a Cabinet berth, Aparajita Sarangi from Odisha, Rajiv Chandrashekhar from Karnataka, Guru Prakash from Bihar and Raju Bista from West Bengal are the new spokespersons.