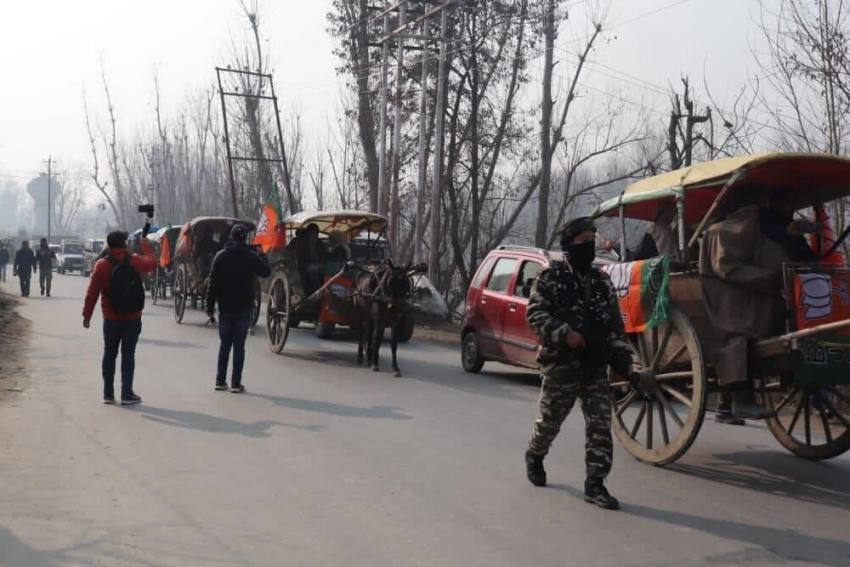 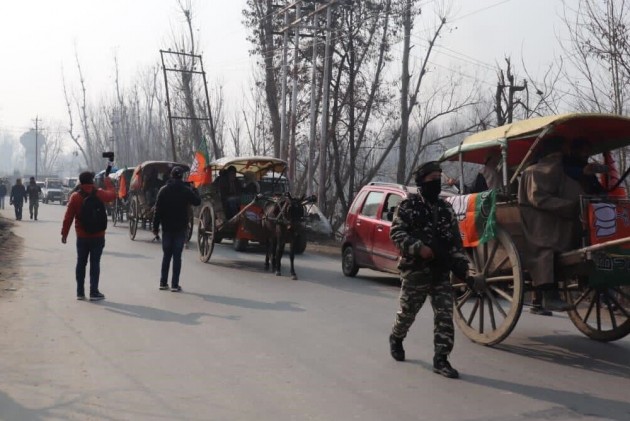 Amid massive security cover, the BJP today took out a “rally” with around 12 tongas in the north Kashmir district of Sopore.

Though a small number of the BJP workers participated in the roadshow, the move is significant as Sopore is known as the hotbed of separatist politics of Kashmir for the past 30 years. Sopore is also the hometown of senior separatist leader Syed Ali Geelani.

BJP spokesperson Altaf Thakur said only a handful of tongas took part in the rally as very few are available in Sopore. He said the aim of the rally was to convey to the people of Sopore the BJP’s message of development.

In a statement here, the party said the BJP’s Sopore unit organised “a historical tonga rally in Sopore town.” The party said Sopore town, neglected over the past 70 years by the previous governments, will be again developed as “Chota London”.

The tonga rally was organised from Malbugh landmark to the Army Goodwill School in Sopore.

BJP state general secretary and in-charge Kashmir, Vibodh Gupta, said the party will restore the pristine glory of Sopore town and make it “Chota London” again, known so because of its affluence and apple trade.

Gupta said the people of Kashmir have supported the vision of Prime Minister Narendra Modi. “It is because of good policies of the central government that peace has been restored in Jammu and Kashmir. Sopore has been neglected for the past 70 years and it has also suffered from terrorism and separatism. The historic fruit mandi will be developed as international mandi according to international standards,” he said.
“Apart from developing the main town, the party is planning to set up cold storage facilities in the fruit mandi. These steps will help the ailing fruit industry. The farmers can sell the produce any time of the year,” he said.

Gupta said Prime Minister Narendra Modi has a vision for Jammu and Kashmir and its people and the party will leave no stone unturned to fulfil that vision.

The BJP candidate from the area for the DDC polls, Dr Fareeda, said the people should support the development agenda of the BJP. “We are hopeful that people will support the change. They will say no to traditional and family politics,” she said.

She said there will be women empowerment, youth will get jobs and more skill schemes would be made for the educated youth of the region.