The CM shrugged off questions about the controversial linch meeting, saying that stemming the Covid-19 spread in the state was the top priority for him. 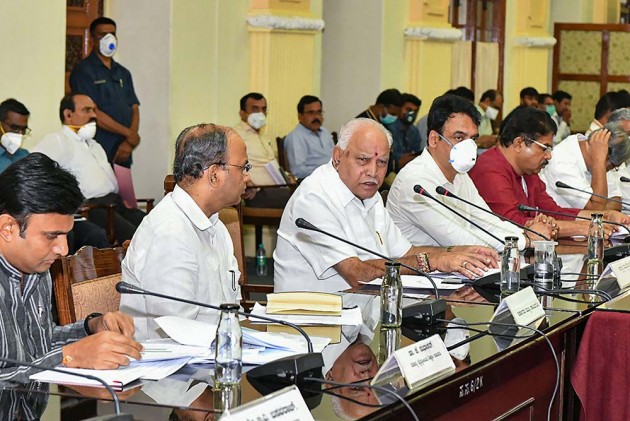 After a Covid-induced lull over the past two months, Karnataka’s familiar political chorus was back this week – was dissidence brewing in the ruling BJP? The speculation was set off by a group of party legislators meeting for lunch at the house of fellow MLA Umesh Katti. Of course, there’s been little -- by way of any postprandial development -- to warrant concern. But, the event did create a buzz.

For the record, however, that sort of speculation isn’t new in Karnataka -- back in February, it was an anonymous letter railing against Chief Minister B S Yediyurappa that did the rounds, briefly getting some media attention before fizzling out. Even BJP functionaries allow for a certain amount of restlessness among some party leaders given the circumstances of how the government was formed last August with the help of those who defected from rival parties. Most of these newcomers won their by-elections and have got ministerial berths leaving the older members feeling aggrieved.

Katti, an eight-time MLA from Belgaum who too didn’t make it to the cabinet, has dismissed any suggestion of a rebellious plot against CM Yediyurappa. But he’s been pressing for a Rajya Sabha nomination for his brother Ramesh, a former Lok Sabha member who was overlooked for a ticket in the general elections last year. Another voice that egged speculation on was Bijapur City MLA Basanagouda Patil Yatnal, a maverick of sorts.

“To show that they are assertive, they can at least make a sound,” says one party functionary. “But that doesn’t mean there’s any instability or that any one of them is planning to disrupt the government,” he said.

The CM himself merely shrugged off questions about the episode, saying that stemming the Covid-19 spread in the state was the top priority for him.

At the core of the problem, points out political analyst A Narayana, is the fact that the BJP in Karnataka -- unlike in many other states -- isn’t a coherent unit but rather an amalgamation of many groups. That inorganic growth, created by roping in individuals and sometimes splinter groups from other parties, brings its own set of problems, he says.

“Now that the Rajya Sabha elections and Legislative Council elections will be due because of retirements, it seems the immediate claim is for those positions,” Narayana adds.