BJP Accuses Congress Of Not Being 'Vocal' Against Rioters In Bengaluru

The BJP also said Chief Minister B S Yediyurappa must make the rioters pay heavily for destruction of properties. 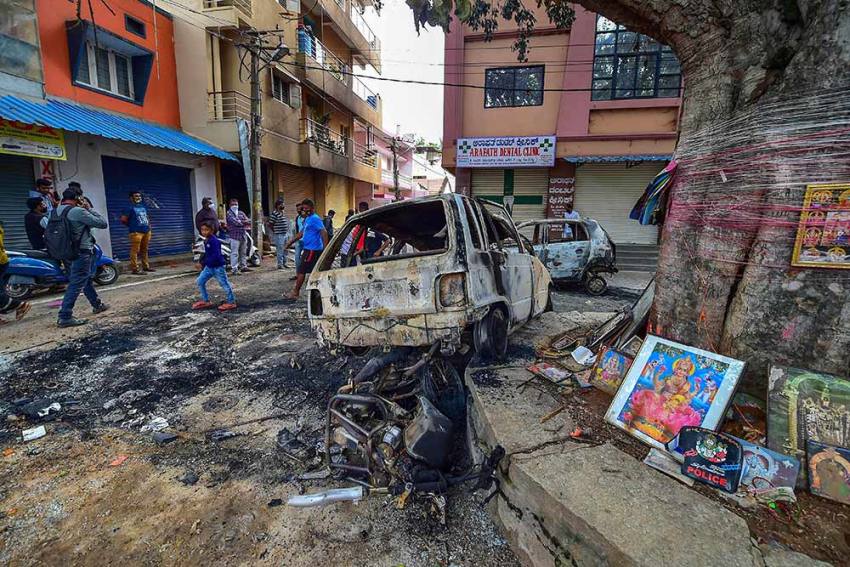 Residents walk past charred remains of vehicles vandalised by a mob over a social media post, allegedly by a relative of a Congress MLA, in Bengaluru. Atleast three people were killed after police opened fire to quell a mob.
PTI Photo
PTI August 12, 2020 00:00 IST BJP Accuses Congress Of Not Being 'Vocal' Against Rioters In Bengaluru 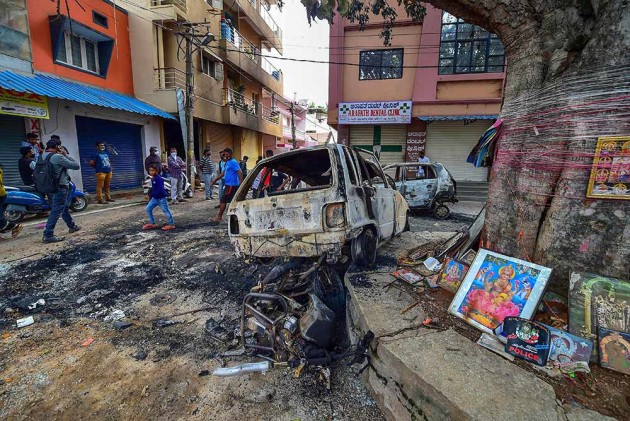 The ruling BJP in Karnataka on Wednesday accused the Congress of not being "vocal" against rioters who attacked a legislator of the opposition party in Bengaluru, saying "appeasement" seemed to be its official policy.

The BJP also said Chief Minister B S Yediyurappa must make the rioters pay heavily for destruction of properties.

"Shameful n disgusting! Karnataka Congress is silent on yesterday's vandalism in Bengaluru. Pseudos are also not vocal against this riot! Freedom from fear of riots is what B'luru needs now. Sri B S Yediyurappa must make rioters pay heavily for destruction of properties.#SaveBengaluru," BJP general secretary P Muralidhar Rao tweeted.

Rao is the BJP's in-charge for Karnataka affairs. The BJP is in power in the state.

BJP general secretary (organisation) B L Santhosh alleged that the Congress was maintaining "dead silence". He noted that rioters had attacked the house of Congress MLA Akhanda Srinivasa Murthy, a Dalit.

"... Total support for right to riot. For them appeasement is the only official party policy," he said.

"After 14 hours Karnataka Congress wakes up to blame Naveen for face book post & Police for delay in taking action. One straight question. Does your party support riots like this? Why Cong hesitates to condemn riots by minority groups? #CongSupportsRiots," he said in a tweet.

Karnataka Congress leader Dinesh Gundu Rao hit back at Santhosh, accusing him of using the incident to gain political mileage.

His statement is a crude attempt to communalise the issue & divide on caste lines, Rao said, calling it "pathetic and deplorable".

Responding to his swipe, Santhosh tweeted, "At least acknowledge that your own Dalit MLA's house was ransacked . Police station was destroyed. Why Why Why so much of appeasement , fear when your own MLA is targeted ? Be simple & straight Sir."

At least three persons were killed after police opened fire to quell a mob that went on a rampage in Bengaluru.

Rioters were angry over a social media post allegedly put out by the Congress
legislator's relative. The post's content was deemed religiously offensives by them.

Police said Naveen, who allegedly put out the post, has been arrested.

Opposition Congress and JD(S) in Karnataka have extended complete support to the state government in establishing peace in violence-hit parts of the city and demanded immediate action against culprits.