The budget was historic as it was presented by the first ever woman finance minister of the state, Ajanta Neog. 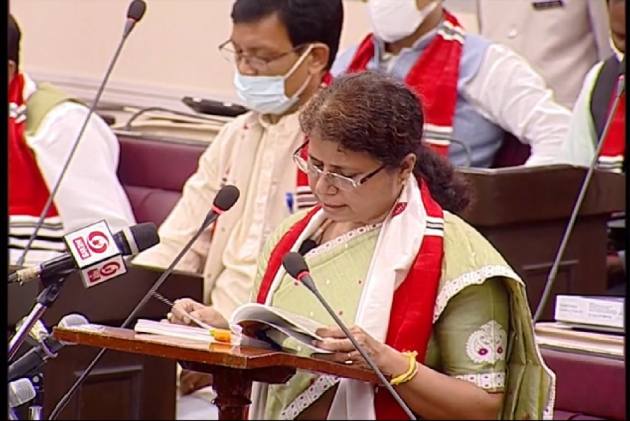 The BJP-led government in Assam tabled its first budget in its second term on Friday keeping it free of new taxes and describing it as pro poor and middle class. It was also historic as it was presented by the first ever woman finance minister of the state, Ajanta Neog. The budget, however, offered few surprises as several key aspects it covered were already announced by chief minister Himanta Biswa Sarma on different occasions.

Sarma later thanked and congratulated Neog for the Rs 1.07 lakh crore-budget proposal without imposing any additional tax burden and giving a clear outline of the government’s commitment to fulfill the pre-election promises. This was the first budget under Sarma as the chief minister; he has had the experience himself having served as finance minister in the BJP’s previous term and also during the Congress government earlier.

He termed the proposals for waiving micro finance loans to 26 lakh beneficiaries,  jobs for unemployed youth, increase in the number of beneficiaries and monthly financial assistance of Arunodoi scheme as very significant.

He also described as revolutionary the proposals to develop the agriculture, horticulture, dairy and veterinary sectors , making particular mention of the plans for sex-sorted artificial insemination to produce more cows than bulls.

Among other things, the budget proposals include electricity connection in every Anganwadi Centre, setting up around 1000 hospitals in rural areas apart from construction of five new medical colleges.

He also said that the Covid-19  situation had led to a digital divide which was about to cripple the education system. To close the gap, the budget has proposed to give smart phones to eight lakh students of poor families.

Neog said the budget was a challenge given the Covid-19 situation, but expressed hope it has addressed the hopes and aspirations of the people.

Microfinance Incentives: Initiatives to safeguard the economically vulnerable groups and individuals from the undue hardship of usurious interest rate and coercive means of recovery by all lenders of micro finance.

Orunodoi: Increase in monthly amount to Rs 1000 per family from the current financial benefit of âÂÂÂÂ¹ 830 per family in the women empowerment DBT scheme.

Embankments-cum-roads: 1000 km of embankments in Brahmaputra and Barak Valley will be strengthened and converted into road-cum-embankments as flood mitigation measure.

Blue Revolution: Tanks to be constructed in all revenue villages to encourage community-based fish culture.