A mix of old guards and new entrants from Congress and JDS are making it to the 17-month-old cabinet. 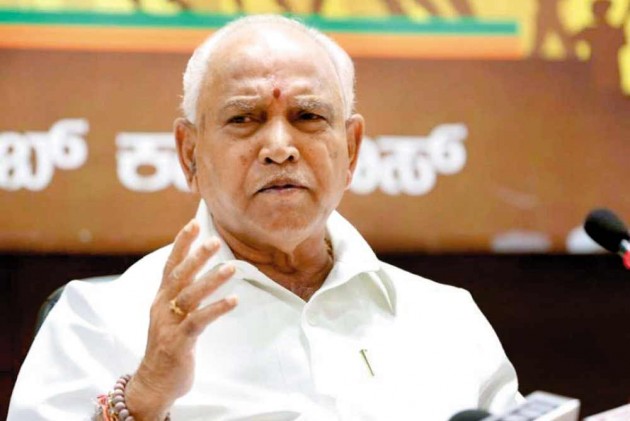 Seven new Ministers on Wednesday took an oath of office in Bengaluru as part of Chief Minister B S Yediyurappa cabinet expansion.

The chief minister indicated that Excise Minister H Nagesh will be dropped from the Ministry, and one berth will be kept vacant as he expands his 17-month-old cabinet.

Speaking to reporters here, he said other things will be discussed with party central leaders who are coming. "We have kept one post vacant, and (regarding) Nagesh... I will discuss with him and try to convince," the Chief Minister said, indicating that he will be dropped from the Ministry.

The cabinet currently has 27 members, and seven berths are vacant. According to a state Information Department release, Governor Vajubhai Vala administered the oath of office and secrecy to the new members who were inducted to the Cabinet at 3.50 pm at the Glass House of Raj Bhavan on Wednesday.

BJP General Secretary in-charge of state Arun Singh is in the city to attend the swearing-in. This would be the third expansion of the cabinet since Yediyurappa assumed charge in July, 2019 after the collapse of the Congress-JDS government in the wake of revolt by 17 MLAs of the coalition partners.

It's a mix of old guards and new entrants from Congress and JDS who are making into the cabinet. Keeping up the promise, Congress-JD(S) rebels-turned BJP MLCs R Shankar and M T B Nagaraj, who helped the saffron party come to power, are being inducted by Yediyurappa.

Another MLC Yogeshwar, who is said to have played a key role by managing Congress-JD(S) rebel MLAs, during the political turmoil in the state in 2019, is also being inducted into the Ministry. Among the party old guards making it to the cabinet include Umesh Katti (Hukkeri), S Angara (Sullia), Murugesh Nirani (Bilgi) and Arvind Limbavali (Mahadevapura). While Katti (eight-time MLA), Nirani and Limbavali (state BJP Vice President) have been Ministers in the previous BJP government, for Angara (six times MLA) this will be his first stint as the Minister.

However, RR Nagar MLA N Munirthna not making it to the list has come as a surprise, as Chief Minister while campaigning during the November 2020 by-polls to the constituency has announced that he will be made Minister on being elected.

Munirathna was also among the Congress-JD(S) rebels who switched over to the BJP. Induction of Shankar, Nagaraj and Yogeshwar will take the number of MLCs in the Ministry to five, with Deputy Chief Minister Laxman Savadi and Muzrai Minister Kota Srinivas Poojari already in the cabinet.

This has led to some amount of resentment within the party, as many MLAs are upset that those not elected directly by the people are being made Ministers.