With the BJP gearing up for the next round of Assembly polls in five states early next year, it is expected to take various measures to bolster its social equation. 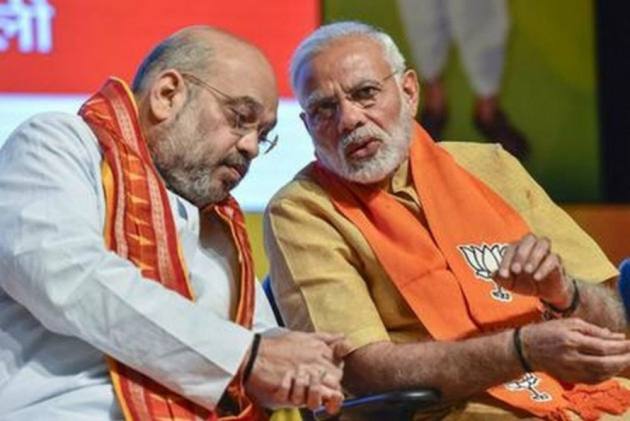 Amid speculations of a cabinet reshuffle, Prime Minister Narendra Modi on Friday held discussions with Union home minister Amit Shah and NJP chief JP Nadda. Union ministers Jitendra Singh and Ravi Shankar Prasad and BJP general secretary (organisation) BL Santhosh were also part of the meeting. Modi has not conducted a cabinet reshuffle since being elected back to power in May 2019.

This development also comes in the backdrop of speculations of cabinet expansion in Uttar Pradesh ahead of the Assembly elections next year. UP Chief Minister Yogi Adityanath had met the central BJP leadership earlier this week during his two-day visit to Delhi.

While speculations of cabinet expansions are rife, sources told PTI that Friday’s meeting was not something new as Modi has been meeting Union ministers in different batches of late, and Nadda has also been present there.

The deliberations among the top BJP leaders at the prime minister's residence came a day after Shah also met party allies from Uttar Pradesh, including Apna Dal's Anupriya Patel, who was a minister in the first Modi government but was not inducted in the next. There has been no official word from the party on these deliberations.

The BJP has of late been engaged in the review of its organisation and government works in different states. Nadda had also held a meeting with the party general secretaries where, besides the relief work carried out by the saffron organisation during the Covid-19 pandemic, its performance in the recent Assembly polls was also reviewed.

With the party now gearing up for the next round of Assembly polls in five states early next year, including in all-important Uttar Pradesh, it is expected to take various measures to bolster its social equation.

Of these five states, the BJP is in power in Uttarakhand, Goa and Manipur, besides Uttar Pradesh, while the Congress is at the helm in Punjab.

Santhosh, who has often been part of the confabulation among the BJP top brass, had recently visited Uttarakhand and Goa besides Uttar Pradesh.

Besides Adityanath, another state leader who had recently met Modi, Shah and Nadda is Suvendu Adhikari, the leader of opposition in West Bengal, a key state in the BJP's political schemes where it suffered a setback on Friday as its national vice president Mukul Roy joined the Trinamool Congress.

Sources said the party leadership may move to take a series of measures to reinvigorate its state organisations and governments, and a reshuffle of the Union Cabinet can be a part of the larger exercise.

Modi's meetings with ministers should be seen in connection with a series of deliberations the party has undertaken at the national and the state level, they said.

Three such meetings of Union ministers with the prime minister have been held so far at the latter's residence, and they have lasted for hours, sources said. A presentation was also given by several ministers, they added.