In the 225-member Legislative Assembly, including one nominated Speaker, the Congress has 80 legislators, JD-S 37 and the BJP 104, while one the BSP MLA continues to support the coalition even after Nagesh and Shankar withdrawing their support. 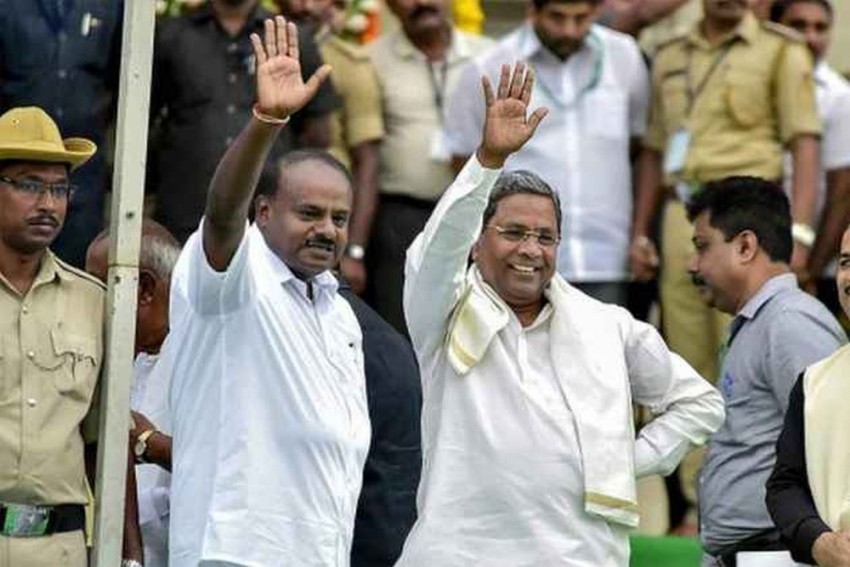 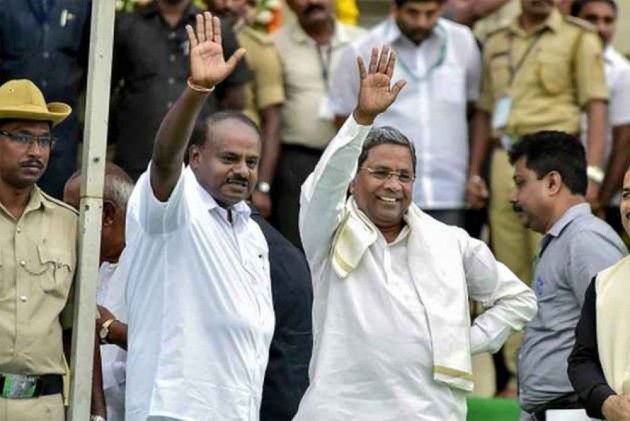 The Congress has called a meeting of its Karnataka legislature party on January 18 amid efforts to keep its flock together as it accused the BJP of indulging in horse-trading to destabilise the state government.

Asserting that the Congress MLAs were "intact," the party leaders dismissed reports claiming that some legislator were ready to quit and said that there was no threat to H D Kumaraswamy-led government.

"Congress Legislature Party meeting presided by CLP leader Siddaramaiah is scheduled for 3:30 pm on January 18 at the Conference Hall of Vidhana Soudha (state secretariat)," Siddaramaiah's office said in a statement on Wednesday.

The meeting assumes significance following attempts by the Congress to reach out to its disgruntled MLAs, who are allegedly ready to jump ship to the BJP side.

Addressing the media, Congress veteran Mallikarjun Kharge said all the 118 MLAs of the coalition are intact and questioned why the Bharatiya Janata Party (BJP) has kept its MLAs in a resort in Haryana's Gurugram, far away from Karnataka.

"I have spoken to Chief Minister H.D. Kumaraswamy, Deputy Chief Minister G. Parameshwara as well as Congress General Secretary K.C. Venugopal. They all confirmed the stability of Karnataka government. All our 118 MLAs are intact," said Kharge.

He said with the aid of the Narendra Modi-led Centre government, the BJP used all tricks including intimidating tactics but failed to destabilise the Karnataka government.

"From threatening our MLAs with IT and ED raids to luring with money, the BJP's efforts to destabilise the Karnataka government have doomed and that is why they have now hidden their MLAs in a resort in Gurugram," said Kharge.

Dismissing reports that some of the party MLAs are "missing", Kharge said the BJP, as a desperate measure, is spreading rumours and false information to mislead the people.

"If the BJP is strong in Karnataka, as they claim, then why have they holed up their MLAs in Gurugram? They claim to believe in democracy, so why not free the MLAs?" said Kharge.

Asked to comment on speculations of the Congress being in touch with certain BJP MLAs, Kharge replied: "We are not inviting anyone but if someone is willing to come then we cannot shut the door on them."

According to Congress sources, few ministers from the party have even offered to step down in the larger interest and to keep the coalition intact. The party leadership is also looking into the option, they added.

There are reports that a few of the MLAs have gone incommunicado, with at least three to five of them camped in Mumbai along with a couple of BJP leaders.

Meanwhile, speaking to reporters in Chikkamagaluru, Siddaramaiah lashed out at the BJP, calling it "shameless".

"They (BJP) don't have any belief in democracy. People have given them a mandate in the election to sit in the opposition.

"People have not given them the verdict to govern. In the last six months, they have been trying to destabilise this government," he said.

"Yeddyurappa (BJP President) has grown old, but has no brain. He is around 76 years of age, but still he wants to become the chief minister through wrong means by offering crores of rupees to our MLAs. This is a threat to our democracy and BJP doesn't believe in democracy and Constitution," he alleged.

Accusing the BJP of keeping its MLAs confined to a hotel in Haryana, Siddaramaiah charged the party leaders with furnishing false information to media about forming the government.

State BJP General Secretary C T Ravi said the Congress leaders while claiming that none of their legislators were going to resign, are also accusing the BJP of horse-trading, and added that their statements were oxymoron in nature.

"When we look at the ongoing political developments in the state, several suspicions arise about the Congress party's behaviour. It is unnecessarily blaming the BJP for it.

"Other than misleading the people of the state, there was no other good purpose behind it," Ravi said in a statement.

The "unnatural" alliance between the Congress and the JD(S) was the reason for all these developments, not the BJP, he said.

Congress General Secretary in-charge of Karnataka KC Venugopal, who has been camping in the city since Monday night and holding a series of meetings with party leaders, said that all the Congress MLA's are "fine and intact."

He termed the media reports about a few party MLAs planning to resign as "baseless".

"Nothing is going to happen. All the Congress MLAs are intact, we are in touch with all of them," he told reporters here.

Asked about MLAs camping in Mumbai, Venugopal asked, "Are you sure that they are in Mumbai only?

"That was day-before yesterday, just verify now," he said.

Venugopal asserted that the coalition government "will continue for next four-and-half years".

"We have nothing to worry, we have contact with every MLA, all will be okay.

"We are also calling CLP meeting on January 18," he said and accused the BJP of making repeated attempts to destabilise the government by trying to poach MLAs.

Pradesh Congress chief Dinesh Gundu Rao said there is not going to be any "Sankranthi-kranti, or Deepawali-damakha or New Year-blast" as claimed by the BJP.

"It will be flop show by BJP... our government is stable, there is not even an inch of threat to the government and we are relaxed," he said.

"There is no need to worry or discuss our government's stability. What needs to be discussed is unconstitutional attempts by the BJP government at the centre and its use of government machinery to threaten MLAs," he added.

In the 225-member Legislative Assembly, including one nominated Speaker, the Congress has 80 legislators, JD-S 37 and the BJP 104, while one the Bahujan Samaj Party (BSP) MLA continues to support the coalition even after Nagesh and Shankar withdrawing their support.