With a 48.5 per cent votes share, the TMC looks set to be heading for a massive mandate 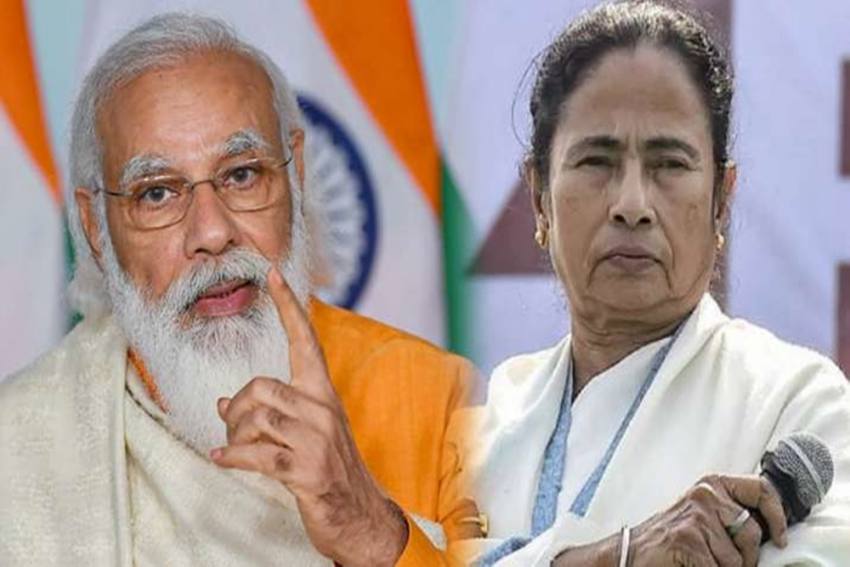 A Mamata Banerjee victory is likely to push the BJP further on the backfoot, more so because the party carried out an intense campaign over three months.
Snigdhendu Bhattacharya 2021-05-01T21:36:25+05:30 West Bengal Assembly Elections 2021: TMC Set To Storm Back To Power In West Bengal

West Bengal state election trends continue to show Mamata Banerjee's TMC significantly ahead of the BJP, leading in 205 seats, while the BJP was leading in 84 seats, as of 1.40 pm.

With 48.5% votes share, the TMC looks set to be heading for a massive mandate. At 1.26 PM, the party was leading in 202 while the BJP was leading only in 77. The Left-Congress-ISF alliance has been reduced to insignificance in what seemed to be an intensely polarising election. In the 2019 Lok Sabha, the total vote share of the Left and the Congress stood at 12% while contesting separately. Now, fighting as an alliance, their vote share stood around 8%.

Meanwhile, BJP's Swapan Dasgupta was trailing by 6,500 votes after the fifth round of counting.

One of CPI(M)'s last 'heavyweights', Ashok Bhattacharya, was in the third position till fourth round of counting.

Responding to the trends, TMC MP Derek O’Brien tweeted, “We will win over #Covid as well, for WE CARE for people.”

We will win over #Covid as well, for WE CARE for people

West Bengal has a 294-member Assembly but elections could not be held for Shamsherganj and Jangipur seats due to the death of candidates.

West Bengal has recorded 78.32per cent voter turnout in the final and eighth phase of Assembly elections, held in 35 constituencies, chief electoral officer Aariz Aftab said on Friday. Kolkata reported the lowest turnout at 59.46 per cent, he added.

Whether Trinamool Congress (TMC) supremo can return to power to rule the state for the third consecutive time, or whether the Bharatiya Janata Party (BJP), which sought votes in the name of Prime Minister Narendra Modi, can script a historic victory has remained a question for the answer of which the politically conscious people of the country are keenly waiting.

Political analysts believe that a win for the BJP in the state will provide the party with much-required oxygen in the face of criticism and protest over the farm bills and the Covid-19 second wave management. This would help them claim that the people were still in support of Modi, while only Opposition leaders were creating a hullabaloo.

A Mamata Banerjee victory, on the other hand, is likely to push the BJP further on the backfoot, more so because the party, led by Modi and Union home minister Amit Shah, carried out an intense campaign over three months involving half a dozen union ministers, ministers from BJP-ruled states, MPs and MLAs from other states and the BJP’s national leadership.

Modi himself addressed 26 rallies in the run-up to and during the month-long elections. Mamata Banerjee has already said that once the elections were over, forging an Opposition alliance at the national level would be her priority.

Going by the 2019 Lok Sabha election trends, the TMC had secured 43.3 per cent votes and bagged 22 of the state’s 42 Lok Sabha seats, while the BJP got 18 seats and 40 per cent votes. The Congress won two seats, with a 5 per cent share of the polled votes. The Left Front got a 7 per cent vote share but won no seats.

This time, the Left and the Congress have stricken an alliance and have taken the Indian Secular Front, a party recently launched by Muslim cleric Abbas Siddiqui, on board. It remains to be seen if the Samyukta Morcha manages to make any mark in this election which has been perceived to be an intensely polarised battle between the TMC and the BJP.

Since the Lok Sabha elections, there have been plenty of dramatic changes in political equations. The Gorkha Janmukti Morcha (GJM)’s fugitive leader Bimal Gurung, an ally of the BJP since 2009, has returned to the Darjeeling hills after living in hiding for over two years. The one-time “boss” of the hills has campaigned intensely in favour of the TMC in about a dozen Assembly constituencies in the foothills of Darjeeling.

On the other hand, heavyweight TMC minister Suvendu Adhikary, one of the TMC’s most popular and influential leaders, has joined the BJP and launched a scathing attack on his old party, initially targeting Mamata Banerjee’s nephew Abhishek, and later Mamata Banerjee directly. Mamata, deciding to take him head-on, herself contested from Suvendu’s bastion, Nandigram, 130 km away from her residence in Kolkata.

This turned the seat into the most high-profile constituency in the state. It also witnessed intense communal polarisation, as Adhikary started calling her as “Begum” and TMC supporters as “Pakistan supporters”.

Apart from this high-profile defection of Adhikary, several other TMC leaders, including minister Rajib Banerjee and more than a dozen MLAs have switched over to the BJP. Most of them have got BJP tickets, such as Rabindranath Bhattacharya in Singur, Prabir Ghosal in Uttarpara and Dipak Haldar in Diamond Harbour.

However, the biggest change that happened was the entry of Prashant Kishor’s organisation in June 2019, as the TMC inked a deal with him soon after the Lok Sabha election debacle. Since then, his organisation, having a workforce in each of the state’s 294 Assembly constituencies, has got deeply involved in the TMC’s internal re-organisation. They also helped the party carry out several intense public outreach campaigns.

Sunday is also a day to watch out for Prashant Kishor, as he has said he would quit political consultancy if the BJP managed to win more than 100 seats.

The exit polls that were released on April 29 reflected no direction to the result. Some said the battle was too close to call, some gave the TMC a slight edge over the BJP, while some predicted a sweeping victory for the saffron party, whose best tally in the state till 2016 has been winning only 3 seats. In the state Assembly, 148 seats are required for a majority.

People will also be watching out for the fate of candidates like the BJP’s Mukul Roy, contesting an election for the first time in two decades, Swapan Dasgupta, who is contesting for the first time and economist Ashok Lahiri, also a first-timer on the electoral field. Union minister Babul Supriyo and BJP Lok Sabha MPs Locket Chatterjee and Nishith Adhikary are also in the fray.

Nevertheless, whoever emerges the winner will face the immediate challenge of handling the situation, as one in every three persons testing for the infection in the state are getting positive results over the last week.

We’ve Wasted Crucial Time, But We Can Still Save Some Lives