Activist Stan Swamy, who was arrested in connection with the Elgar Parishad case, breathed his last on Monday 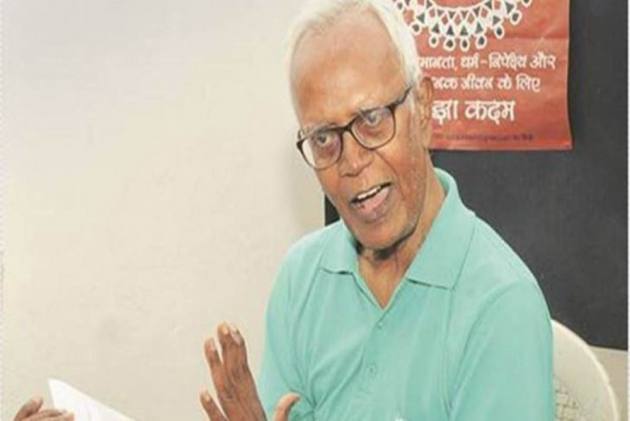 Stanislaus Lourdusamy, popularly known as Father Stan Swamy was born in Tiruchirapalli in Tamil Nadu in 1937. According to his friends, he pursued theology and gained a Master of Arts degree in Sociology from the University of Manila in the 1970s. He later worked as Director of the Jesuit-run Indian Social Institute at Bangalore from 1975 to 1986.

Swamy, who was also a Jesuit priest, moved to Jharkhand thirty years ago, to fight for the causes of the Adivasi community there. He, in fact, published a research paper titled, 'Deprived of rights over natural resources, impoverished Adivasis get prison: a study of Undertrials in Jharkhand’ in 2016.

While in Jharkhand, the activist took up causes of tribals who were marginalised after they were displaced due to various development projects and he fought for the release of tribal youth, who were falsely imprisoned under various charges.

Two days before the NIA took him into custody in connection with the Bhima Koregaon case, the Jesuit priest claimed stringent laws such as UAPA were being misused to arrest tribals "indiscriminately" in a video message.

The National Investigation Agency (NIA) on October 9, last year had filed a charge-sheet against eight people, including Father Stan Swamy, for their alleged involvement in inciting a mob to violence in Bhima Koregaon near Pune on January 1, 2018.

Swamy, a cancer patient who also has Parkisons disease, was arrested from his home in Ranchi on October 8, 2020. Despite protestations that he had never been to Bhima Koregaon, he was still taken to Mumbai where he was produced before a court and remanded to judicial custody.

He is possibly the oldest person to be charged under the Unlawful Activities (Prevention) Act (UAPA), officials had then said.

NIA officials had said investigations established he was actively involved with the CPI (Maoist).

The agency alleged that Swamy had also received funds through an associate for furthering their ideological agenda. Besides, he was convenor of the Persecuted Prisoners Solidarity Committee (PPSC), which the authorities dubbed a frontal organisation of the CPI(Maoist).

They said literature, propaganda material of the CPI (Maoist) and documents related to communications for furthering the group's programmes were seized from his possession.

Swamy on his part had alleged that material had been planted on his computer and he was being falsely accused.

Ahead of his arrest, Swamy had posted a video saying the NIA had been interrogating him and had questioned him for 15 hours during a span of five days.

"Now they want me to go to Mumbai, which I have said that I won't go," he had said, citing the pandemic. The video, posted on YouTube, was recorded two days before his arrest.

"I have never been to Bhima Koregaon for which I am being accused," he had said. He had added that he had sought to be questioned through video conference and hoped that better "human sense" would prevail.

"...what is happening to me is not something unique or happening to me alone, it is a broader process taking place all over the country. We all are aware how prominent intellectuals, lawyers, writers, poets, activists, student leaders are all put in jail because they have expressed their dissent or raised questions about the ruling powers of India," Swamy had said in the video.

He had said he is part of "the process" and in a way happy to be so because he was not a silent spectator and is part of the game.

"I am ready to pay the price whatever be it," Swamy had said.

The Bhima Koregaon case was taken over by the NIA on January 24 last year. Pune Police has alleged that the violence was caused following speeches given by members of the group Elgar Parishad on December 31, 2017. Violence broke out the next day.