The incident occurred on the national highway at Mihauli under Kotwali police circle when the trolley rammed a parked mini-truck. 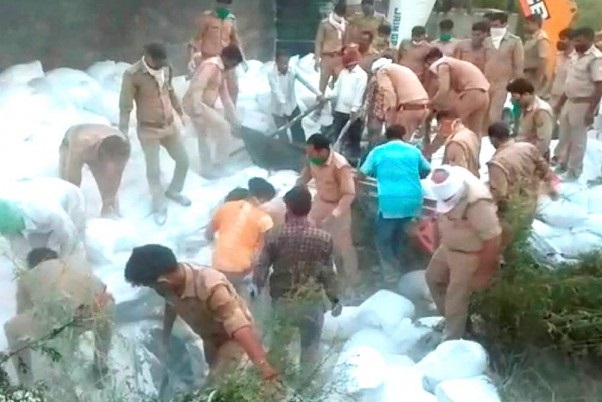 In yet another accident, at least 24 migrant labourers were killed and scores of others were severely injured in a collision between a mini-truck and a trolley in Uttar Pradesh's Auraiya district early Saturday morning.

The incident occurred on the national highway at Mihauli under Kotwali police circle when the trolley rammed a mini-truck.

The trolley, sources said, was carrying 81 migrant workers who were on their way from Faridabad to Gorakhpur.

Both the trucks were carrying the labourers.

"The accident took place in Mihauli in which 24 people died, and around 15 were injured. A trailer truck carrying around 50 migrant labourers was coming from Rajasthan and it collided with a DCM truck.

The accident took place on Saturday between 3.00 am and 3.30 am," Circle Officer, Auraiya, Surendranath Yadav told PTI.

"The DCM truck was coming from Delhi and heading towards Chhatarpur in Madhya Pradesh. The trailer truck hit the DCM vehicle. Both the vehicles turned upside down after losing control," he said.

Senior officials reached the spot and the injured were shifted to the hospital for treatment.

"24 people were brought dead, 22 have been admitted and 15 who were critically injured have been referred to Saifai PGI. They were going to Bihar and Jharkhand from Rajasthan," Archana told ANI.

Also Read: 'How Can We Stop Them From Walking? Let States Decide': SC On Migrant Workers Trudging On Roads

District magistrate Abhishek Singh said that 15 critically injured people are being shifted to the PGI in Sefai in Etawah.

Additional Chief Secretary (Home) Awanish Awasthi said that Chief Minister Yogi Adityanath has taken note of the unfortunate incident in Auraiya. He has expressed his deepest condolences to the families of the labourers who lost their lives.

Thousands of migrant workers from different cities of the country walking back home with their children and meagre belongings have come to define the nationwide lockdown announced almost 50 days ago to contain the spread of the novel coronavirus. The Centre has started special trains to ferry these labourers but that hasn't stopped the latter from undertaking arduous journey on foot.

The labourers say the lack of resources, food and work opportunities have left them with no option but to go back to their home states. The opposition parties have criticised the Centre over its handling of the migrant labourer crisis stemming from the lockdown, which they say could have been plannned and  executed better.