Apart from the earthquake of 4.6 magnitude, an aftershock of 3.7 magnitude was recorded at 10.02 am on Monday with its epicentre six km East-North East of Bhachau.

As many as 14 aftershocks were experienced in Gujarat's Kutch district, after an earthquake of 5.3 magnitude hit the area, officials said on Monday.

No casualty or damage to property was reported, they said.

On Sunday night, an earthquake was recorded with its epicentre 10 km North-North East (NNE) of Bhachau in Kutch.

After that 14 aftershocks rattled the area, including an earthquake of 4.6 magnitude at 12.57 pm on Monday with its epicentre 15 km NNE of Bachau, a scientist from the Gandhinagar-based Institute of Seismological Research (ISR) said.

ALSO READ: Major Strike In Delhi-NCR Possible But We Are Yet To Be Earthquake Resilient, Says Top Geologist

"We are analysing today's quake scientifically to determine whether it is an aftershock or a new earthquake on a different fault line. As of now, we are counting it and other quakes in the region as aftershocks of the last night's earthquake," ISR scientist Santosh Kumar said. 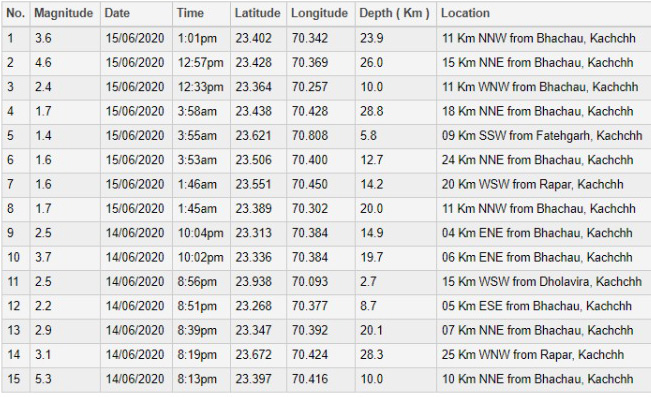 Apart from the earthquake of 4.6 magnitude, an aftershock of 3.7 magnitude was recorded at 10.02 am on Monday with its epicentre six km East-North East of Bhachau, another ISR official said.

At 1.01 pm, another aftershock of 3.6 magnitude was recorded with its epicentre being 11 km NNE of Bhachau.

ALSO READ: Jolted Several Times Recently, Why A Major Earthquake Could Be Catastrophic For Delhi-NCR

No casualty or damage to property has been reported so far, he added.

Also Read: Earthquakes Rattle Delhi's Nerves, Experts Not Sure When The Big One Is Going To Strike