Over a dozen miners were reportedly trapped inside a mine in Meghalaya on December 13 after water from nearby Lytein river gushed into the illegal coal pit. All efforts made by the district authorities to trace them have been futile over the pastseven days. 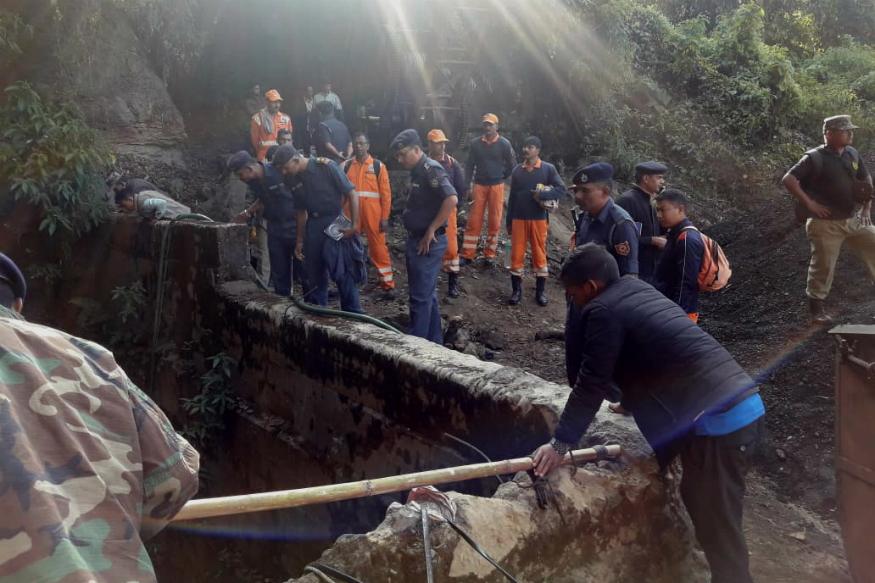 The water level in the 370-feet-deep rat-hole mine receded by a few inches on Friday as efforts continued for the ninth day to rescue 15 trapped miners in Meghalaya's East Jaintia Hills district, police said.

The miners reportedly got trapped in the illegal coal pit on December 13 after water from the nearby Lytein river gushed into it. Incessant rains on Tuesday further increased water levels, hindering rescue operations.

Currently, rescuers are pumping out the water to reach to the miners and over 100 personnel of the centre and the state disaster response forces are working along with local police in the operation.

"Pumping out water is on with the hope that the water level will recede," Superintendent of Police (SP) of East Jaintia Hills district, S Nongtynger, told PTI.

A doctor here said that time is running out and the miners might be at a very high risk if the rescue operation takes long. "They have been without food and water we were informed. Time is running out for them if that is the case. Every minute is precious and authorities have to sort out the problem at the earliest," he said.

Mining expert and award winning rescuer Jaswant Singh Gill on Thursday visited the spot and suggested that the state government should seek help of Coal India in the rescue operation.

Gill, who shot to fame after he successfully rescued 64 miners from a flooded quarry in West Bengal in 1989, also expressed concern after seeing the water level in the mine, a police officer said.

"As it is established that water that got in the mine was from the nearby river, we have to find out the location and plug it to prevent further water flow into the mine," Gill had told reporters.

"I have also advised the government to request Coal India to bring 4 to 5 high power submersible pumps which can be returned after use," he had said.

The district authorities are now in the process of sending Gill's advise to the state government, a senior district official told PTI on Friday.

Meanwhile, a National Green Tribunal (NGT) committee has asked the state government to pay compensation to the next of kin of all who have been killed in mine accidents in the state.

A top government officer, who deposed before the committee in its sitting here Thursday, has informed it that the state government will compensate Rs 1 lakh to the next of kin of the 15 miners. He also informed the committee that there were no records available of any other such accidents in the state.

"The state government did not have records of any such deaths and injuries caused during mining activities," Committee chairman B P Kakoti said.

He added, "I told them of the need to create awareness on safety and scientific mining following all labour laws."

Chief Minister Conrad K Sangma has said that all efforts are on to rescue the victims.