Maharashtra CM Uddhav Thackeray has announced financial assistance of Rs five lakh each to the families of the deceased. 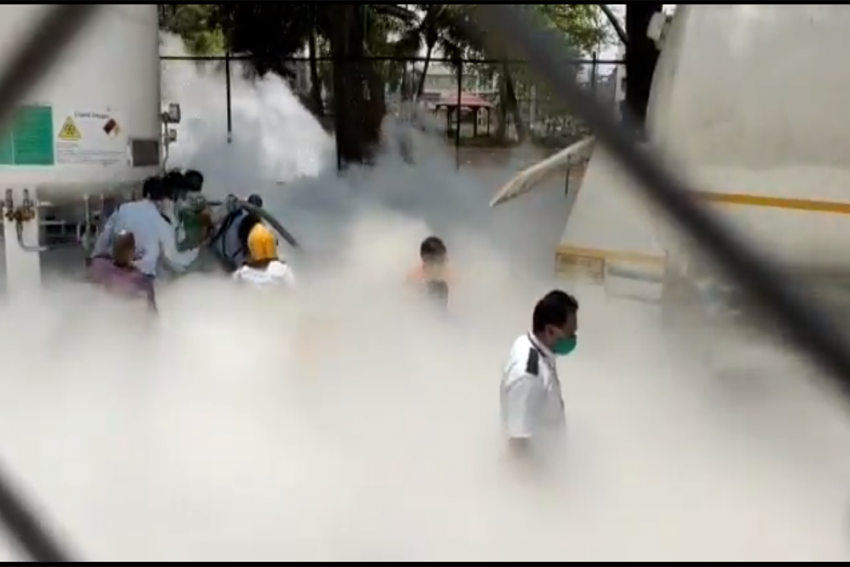 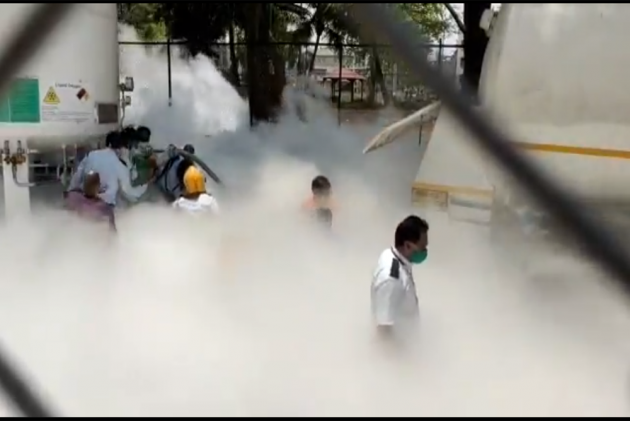 As many as 24 Covid-19 patients died at a hospital in Nashik on Wednesday after one of the oxygen tanks in the facility leaked, officials said adding that the patients were on ventilator support.

Responding to the incident Maharashtra Health Minister Rajesh Tope said that the state government will conduct a probe.

The incident occurred at Zakir Hussain municipal hospital and the oxygen leak was first noticed at 12.30 pm today.

"The patients were on ventilators as well as on oxygen supply, which got interrupted after the leakage in the oxygen supply tank," district collector Suraj Mandhare said.

He further said the municipal corporation immediately shifted dura cylinders from other facilities in the city to help the patients at the Zakir Hussain Hospital.

Soon after the incident, Chief Minister Uddhav Thackeray announced financial assistance of Rs five lakh each to the families of the deceased.

"The kin of every person who died in this incident will get compensation of Rs five lakh. I appeal to people to not indulge in any kind of politics," he said in a statement.

"I do not know how to console the families who lost their members in this accident. Though it is an accident, there will be a thorough probe into it," Thackeray added.

A video of oxygen purportedly leaking from the storage plant has gone viral on social media since this morning.

#WATCH | An Oxygen tanker leaked while tankers were being filled at Dr Zakir Hussain Hospital in Nashik, Maharashtra. Officials are present at the spot, operation to contain the leak is underway. Details awaited. pic.twitter.com/zsxnJscmBp

Some relatives of the deceased Covid-19 patients have alleged that the "lowered supply of oxygen" claimed the lives of their kin.

A senior civic official said of the 150 patients admitted to the hospital, 23 were on ventilator support at the time of the incident while the rest were on oxygen support.

According to officials, the oxygen leakage was noticed at around half past noon, following which hospital authorities were alerted. Hospital officials in turn contacted municipal commissioner Kailash Jadhav seeking technical help to stop the leakage, they said.

Mandhare said a private company looks after the maintenance of the oxygen storage tank located on the premises of the hospital.

"We have given all the information to the government. As far as the oxygen supply is concerned, the NMC has received dura cylinders from places where the consumption is less. Oxygen will be supplied to the patients from these cylinders," he said.

Divisional Revenue Commissioner Radhakrishna Game said a 13 KL (kilolitre) oxygen tank was set up on the premises of the hospital, located in Dwarka area in the north Maharashtra city.

"Around 10 am, a socket of the oxygen storage tank broke and the leakage started. When the hospital staff came to know about it, they deployed jumbo cylinders to supply oxygen to the patients and started shifting some of the patients," he said.

Game said the leakage has been stopped, the tank repaired and the oxygen supply is being normalised.

"As the incident happened, people rushed to the hospital wards which created hurdles in the rescue operations. When this happened, an oxygen tanker reached the hospital premises. Technicians who came with that tanker and technicians at the hospital broke open the lock of the tank and closed the valve which prevented the further leakage of oxygen," Game added.

Expressing grief, Maharashtra Health Minister Rajesh Tope said the 22 deceased, including 11 men and 11 women, died due to a low supply of oxygen caused by the leakage from the storage tank.

They all were on ventilators and Covid-19 positive, he said, adding the kin of the deceased will be given financial assistance from the CM relief fund, which will be announced by the chief minister's office.

Commenting on the leakage from the oxygen tank, Tope said, "The liquid oxygen which was filled in the tank has the temperature of around (minus) 180-degree celsius. There is extreme pressure on the walls of the tank which supplies the oxygen to patients on ventilators. It is more of a technical issue".

Tope said a probe will ascertain whether the leakage was caused due to negligence or due to any other issue.

"Out of the 150 patients admitted in the hospital, 23 were on ventilator support at the time of the incident while the rest were on oxygen supply," he said.

Jadhav said the oxygen level was around 25 per cent in the storage tank at the time of the incident.

Sources said two oxygen tanks were recently set up at the hospital and the task of maintaining the oxygen storage and maintenance has been given to a private company.

They also said the incident occurred when oxygen was being filled in one of the tanks from a tanker, which disturbed the supply to the patients who were on ventilators as well as to those dependent on oxygen for breathing.

Leela Shelar, who lost her 60-year-old mother in this tragedy was inconsolable.

"My mother was admitted in the hospital on Tuesday and was put on ventilator support," she said.

Shelar claimed as her mother complained of difficulty in breathing she requested the nursing staff to help, but they didn't pay heed. "I didn't admit my mother here to die like this," she said while fighting her tears back.

Union Home Minister Amit Shah has expressed deepest condolences to the family members of patients. "I am distressed to hear the news of the accident of oxygen leak in a hospital in Nashik. I express my deepest condolences to those who have lost their loved ones in this accident. I pray to God for the speedy recovery of all the other patients," Shah tweeted in Hindi.

"We fear more patients will die due to the lack of oxygen supply as the government has failed to upgrade the health infrastructure in the state," Mahajan said.

Leader of Opposition in the Maharashtra Legislative Council, Pravin Darekar, alleged the government has become lethargic in addressing the woes of people, which is a cause of worry.

"These deaths in Nashik bear testimony to the government's failure in saving lives of people," he added.

Meanwhile, senior police officers and personnel rushed to the hospital to control the situation.

Police dispersed the crowd of onlookers and restricted entry to the hospital.

Nashik Police Commissioner Deepak Pandey said the tragedy occurred due to the oxygen leakage while filing up the storage tank.

Police personnel are deployed in large numbers at the hospital.

Maharashtra is the worst-hit state in India both in terms of the number of Covid-19 cases and fatalities.

The state on Tuesday reported 62,097 fresh infections, taking the tally to 39,60,359, while 519 more patients succumbed to the infection, as per the state health department.