India saw a spike of 3,970 COVID-19 cases during the same period, the ministry said, adding the total number of people suffering from the infection now stood at a staggering 85940, including 53035 active cases, 30153 cured/discharged/migrated cases and 2752 deaths. 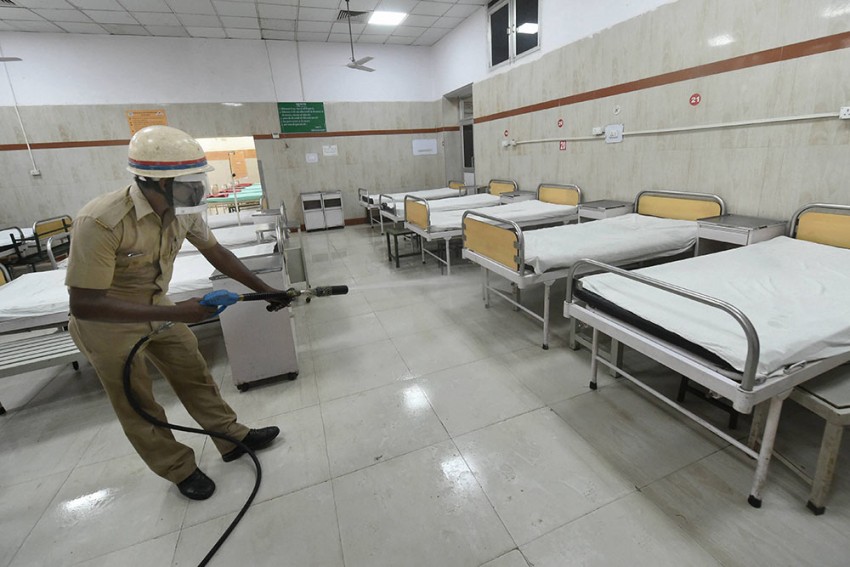 UP Fire and Emergency Services employee sprays disinfectant inside a civil hospital at Hazratganj, as a measure to contain the spread of coronavirus, during the nationwide lockdown, in Lucknow. (PTI)
Outlook Web Bureau 2020-05-16T09:56:05+05:30 103 Deaths, 3,970 New COVID-19 Cases In India In Last 24 Hours 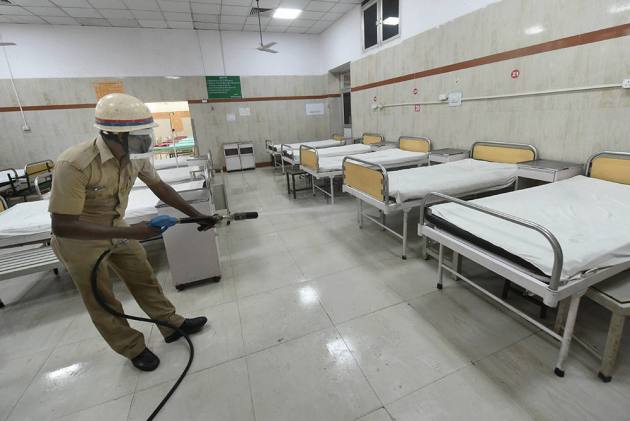 India has registered another 103 deaths due to novel coronavirus in the last 24 hours, taking the tally to 2,752, the Ministry of Health and Family Welfare said on Saturday morning.

The country also saw a spike of 3,970 COVID-19 cases during the same period, the ministry said, adding the total number of people suffering from the infection now stood at a staggering 85940, including 53035 active cases, 30153 cured/discharged/migrated cases and 2752 deaths.

Maharashtra continues to be the worst-hit state in the country with maximum cases followed by Gujarat.

"Thus, around 35.08 per cent patients have recovered so far," a senior health ministry official said.

The total confirmed cases include foreign nationals too.

Of the 103 deaths reported since Friday morning, 49 were in Maharashtra, 20 in Gujarat, 10 in West Bengal, eight in Delhi, seven in Uttar Pradesh, five in Tamil Nadu, two in Madhya Pradesh, one each in Karnataka and Himachal Pradesh.

The death toll reached 36 in Karnataka, 34 Telangana and 32 in Punjab.

Haryana and Jammu and Kashmir have reported 11 fatalities each due to the disease, while Bihar has registered seven and Kerala has reported four deaths, the ministry said.

Meghalaya, Uttarakhand and Puducherry have reported one fatality each, according to the ministry data.

More than 70 per cent of the deaths are due to comorbidities (existence of multiple disorders), according to the ministry.

Odisha has reported 672 coronavirus infection cases so far while Kerala has recorded 576 cases. A total of 203 people have been infected with the virus in Jharkhand and 191 in Chandigarh, the ministry said.

Tripura has reported 156 cases, Assam has 90 cases, Uttarakhand has 82, Himachal Pradesh has 76, Chhattisgarh has 66 and Ladakh has registered 43 cases so far.

Thirty-three COVID-19 cases have been reported from the Andaman and Nicobar Islands.

Manipur has three cases. Mizoram, Arunachal Pradesh and Dadar and Nagar Haveli haave reported a case each till now.

"230 cases being reassigned to states," the ministry said.

"Our figures are being reconciled with the ICMR," it said on its website.