To have third man and fine leg against Afridi is such a flawed field. If India had learnt anything from the past, these two fielders would have been up in the circle. 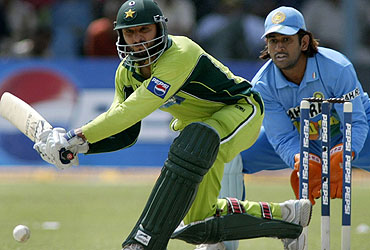 Shahid Afridi has acted decisively twice in this series. In the Bangalore Test, his bat first set up the game for Pakistan and he followed it up with key wickets on the final afternoon. Now he has flattened India in Green Park, Kanpur. He is the man who has made sure Pakistan would return home undefeated.

When a storm blows, it is difficult to stay on your feet. That's what happened with the Indian bowlers. It's not the first time they bowled to Afridi nor was it a rare occasion when he chased them around the park like a terrier. So what did they learn from the past hidings? Nothing.

Afridi's aerial routes are predictable. He prefers the mid-wicket-square leg area, there is this mighty blow over mid-off and he also crashes past the cover region. To have third man and fine leg against him is such a flawed field. If India had learnt anything from the past, these two fielders would have been up in the circle.

In their places, two men should have patrolled the mid-wicket and long-off fence. If he still cleared you, bad luck. At least you would be satisfied you had a game plan against him.

It is a batsman's mindset that he eyes the free areas in the field. Who knows with the third man and fine leg up in the circle, a gambler in Afridi might have taken a chance in those regions. It would have called for delicate shots which, let's be fair, is not exactly the way Afridi approaches his batting.

Another way to bowl to Afridi -- so brilliantly, if briefly, illustrated by Zaheer Khan -- is to mix up the pace of your deliveries. A short-pitched ball is also a better option against him. On Friday, if the Indian bowlers did so, at least I didn't see it. I wonder if all those analysts and men with laptops in the dressing room are up to it. Or it is just that players forget their lessons the moment they step on to the field.

Till Afridi kicked up his storm, India might have sensed themselves in the game. They recovered from a poor start through admirable Rahul Dravid and hard-working Mohammad Kaif. It wasn't a bad pitch but the first hour wasn't easy for the batsmen. It was two-paced because of early moisture. Sachin Tendulkar got a good ball but the rest didn't have the technique to cope up with the conditions.

From a cricketing point of view, Virender Sehwag, M.S. Dhoni and Yuvraj Singh are similar in the way they approach their batting. Their shots carry enormous power but their footwork is limited. It serves them well when the wicket is flat. It shows them up when the ball is darting around in the air and off the pitch.

If your technique is good, as is the case with Dravid, you would come good in most conditions. Otherwise, a lot of equations have to fall in your favour for you to succeed. In our times, we used to call such batsmen 'three-to-five' metre players. If you can stop them from coming forward or going back, you would have them in a bind. And that's essentially because their footwork is absent.

Despite Afridi's heroics, Pakistan still made heavy weather of the target. The way Shoaib Malik and Yousuf Youhana departed, heaving high up in the air on the off-side, you cringed with discomfort in your chair.

They must learn to value their runs. If they want to know how difficult it is to score in international cricket, they just have to walk up and ask Saurav Ganguly! Nobody gives you spare runs. This was the moment when they could have completely swamped India. Instead, they showed unnecessary nerves. It doesn't matter which field you are in, it's important that you love your work, your craft. You must value it.

I might be old-fashioned but this is the way I view this beautiful game. It is not enough that you have won. It is also important for you to know how you should have won. For therein lies the seeds of your improvement. It is good for you, your team, country and the people who are watching it.

India at the moment is rapidly conceding the ground to Pakistan. The ground is slipping fast underneath their feet. In the final hours of the tour, they are in danger of being submerged by the tide which Afridi and his ilk have unleashed.