Narendra Modi's first Independence Day address in his second term as India's Prime Minister comes close on the heels of Centre's decision to revoke Article 370, which granted special status to Jammu and Kashmir. 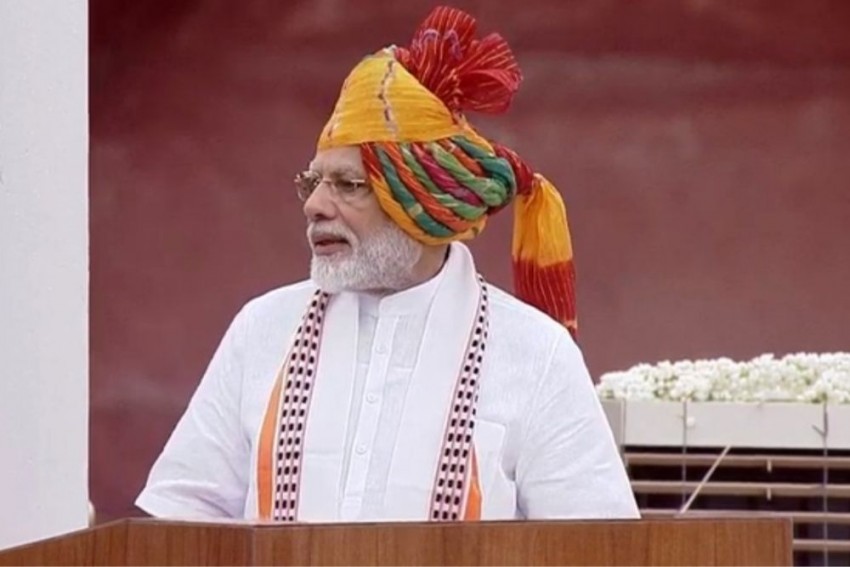 India is celebrating its 73rd independence day. Prime Minister Narendra Modi hoisted the tricolour, and is now delivering his address to the nation from the ramparts of the Red Fort in New Delhi, a tradition followed by successive prime ministers since 1947.

Modi's first Independence Day address in his second term as India's prime minister comes close on the heels of Centre's decision to revoke Article 370, which granted special status to Jammu and Kashmir.

9:05 am : India has much to offer. I know people travel abroad for holidays but can we think of visiting at least 15 tourist destinations across India before 2022, when we mark 75 years of freedom: PM

8:59 am: Let us further the use of digital payments all over the nation, he says.

"Can we think of consuming local products, improving rural economy and the MSME sector," he says.

"The time for implementing such an idea has come. May teams be mobilised to work in this direction. Let a significant step be made on 2nd October, says PM Modi.

8:49 AM: Our forces are India's pride. To further sharpen coordination between the forces, I want to announce a major decision from the Red Fort: India will have a Chief of Defence Staff- CDS. This is going to make the forces even more effective, says PM Modi.

"Only when wealth is created, wealth will be distributed. Wealth creation is absolutely essential. Those who create wealth are India's wealth and we respect them," he says.

8:43 am: "I congratulate my Afghan friends who will be celebrating their 100th independence day in 4 days," says PM Modi

8:40 AM: "Today, the Government in India is stable, policy regime is predictable...the world is eager to explore trade with India.

"We are working to keep prices under check and increase development. The fundamentals of our economy are strong," PM Modi.

8:36 AM: Time has come to think about how we can boost exports. Each district of India has so much to offer, says PM Modi.

8:30 am: "Earlier the aspiration was to have a good mobile phone but now, people aspire better data speed. Times are changing and we have to accept that," says PM Modi.

8:27 am: Now the people are not just happy with wires and poles, they ask when they will get electricity... People's thinking has changed. Earlier, people were happy with merely a plan to make a railway station. Now people ask- when will Vande Bharat Express come to my area. People do not want only good railway stations or bus stations, they ask- when is a good airport coming, says PM Modi.

8:25 am: The government plans to invest 100 lakh crore to modernise the country's infrastucture, says PM Modi. We will develop modern railway stations, medical facilities, and road infrastructure, he says.

8:23 am: With ease of doing business, we should also focus on "ease of living." People should be able to get their job done easily, he says. Let our people have the freedom of pursuing their own aspirations, let the right eco-system be made in this regard, says PM Modi.

8:20 am: "Those who follow the policy of small family also contribute to the development of the nation, it is also a form of patriotism," says PM Modi.

8:11 AM: PM Modi speaks of population explosion, adding its a problem for the future geenration. "There is a section in the society which thinks before bringing a new member to the family. He/she asks if they would be able to give everything to the new members," says PM Modi.

8:05 AM: "Jal Jeevan Mission: We will go forward to ensure the poor of the country have access to clean drinking water," says PM Modi. The government plans to address the issue by investing 3.5 lakh crore in this mission, he says.

8:01 AM: Today, as I speak from here, the people of the country can say, "One nation, one constitution."

7:58 AM: "We do not believe in creating problems or dragging them. In less than 70 days of our new Government, Article 370 was revoked, and in both Houses of Parliament, 2/3rd of the members supported this move," says PM Modi.

"Those who supported Article 370, India is questioning them, If this was so important then why was this Article not made permanent?  After all, those people had huge mandates and could have easily removed its temporary status," he says.

7:57 AM: "In 2019, I was amazed, the mood of the people of the country had changed, disappointment had turned into optimism, dreams became connected with desire and everyone was on the same page that this country can change," PM Modi said.

7:51 AM: Referring to the abrogation of Artilce 370, PM Modi says what the governments in the past 70 years couldn't do, we did it in 70 days. Both houses of the Parliament supported the move by 3/4th majority, he said.

7:49 am: Pessimism has changed to optimism now.

Our Muslim sisters used live in the fear that they could also be subjected to triple talaq at any moment. This scourge didn't let them live with freedom. Several Islamic nations had abolished the practice a very long time ago but we had failed to do it. "If we can fight against child marriage, why can't we end triple talaq," says PM Modi.

7:40 AM: Within 10 weeks of our second tenure, we scrapped Article 370 and Article 35A. The Triple Talaq Bill was also passed to ensure justice to our Muslim mothers and sisters, says PM Modi.

7:36 AM: Prime Minister thanks those who sacrificed their lives for the nation's freedom.

7:35 AM: Today, when the nation is celebrating the independence day, several states have witnessed heavy rains and floods due to which several people have lost their lives. I will speak to the state and Centre to ensure every possible help to them.

7:30 AM: Prime Minister Narendra Modi hoists the national flog. He will address the nationa shortly.

7:16 AM: Prime Minister Narendra Modi has arrived at the Red Fort. He will make his way to the iconic Lahori Gate and will address the nation shortly after hoisting the national flag.

Delhi: Visitors, performers and jawans gather at the Red Fort ahead of #IndependenceDay celebrations. Prime Minister Narendra Modi will address the nation shortly, from here. pic.twitter.com/qQvu7mpreP