Home  »  Website  »  Sports  » Interviews  »  In The Footsteps Of Her Idol
Interview

In The Footsteps Of Her Idol

The first Indian woman ever to claim 10 wickets in a Test, Jhulan, the fastest bowler in the women's version of the game, wants to compliment her speed by fine tuning her line and length like her idol Glenn McGrath. 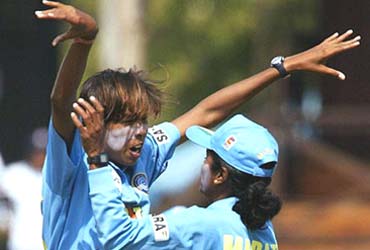 Indian cricket, famed for its spin magicians, can now boast of having the fastest bowler in the world, albeit in the women's version of the game.

Jhulan Goswami, who bowled India to its maiden Test series victory on England soil last week, can work up a pace which can go up to a maximum 120 km per hour.

Not content at becoming the first Indian woman ever to claim 10 wickets in a Test -- a feat she achieved in the second and final game at Taunton where the visitors coasted to a five-wicket win -- Jhulan now wants to compliment her speed by fine tuning her line and length.

"Glenn McGrath is my idol. I idolise him for his consistent ability to maintain an impeccable line and length. He can bowl such long spells, and is always dot on. He is like a bowling machine. I only hope that one day I'll be able to bowl like him," says the 23-year-old pacer, being rated as the new star of Indian cricket.

The 5-foot-11-inch tall girl, who hails from a family of modest means from Chakdah (80 kms from Kolkata), dreams of the day when she will meet McGrath.

"But I don't know what I'll tell him then or whether I'll ask for some tips," Goswami said.

Simple and straightforward in her words and thoughts, Jhulan's cricketing philosophy is also uncluttered, as was apparent when she analysed her success at Taunton.

"I only kept in mind that we have to take 20 wickets to win. I bowled wicket to wicket consistently. I got the breakthroughs whenever my captain (Mithali Raj) handed the ball to me."

An avid cricket fan since her childhood, Jhulan started playing the game with the boys and girls of her village when she was merely seven years old.

"I loved to bowl. And I had to bowl fast as the boys would otherwise not let me hold the ball," she reminisces with a chuckle.

As a child, Jhulan was fond of Kapil Dev.

"But by the time I started playing and became a serious student of the game, he had already retired. And from then on I have idolised McGrath. Among the Indian bowlers, I like Javagal Srinath.

"In fact, I'll give more credit to Srinath, because he took so many wickets bowling in tough Indian conditions. But still, McGrath is special for me," she said.

Among the batsmen, Sachin Tendulkar is her favourite. "I'll definitely like to bowl to him. If I can get his wicket, that will be great."

After the initial years at Chakda, Jhulan came to Kolkata to hone her skills and trained with a south Kolkata club Pathachakra.

"Swapan Sadhu spotted me and brought me to Kolkata. He is still my coach," said Jhulan, who works as a commercial supervisor with Air-India.

Apart from her exploits with the cherry, Jhulan can also wield the willow in style, which is evident from her healthy 30 plus average in Tests. However, the player regards herself not as an all-rounder, but as a "bowler who can bat".

In ominous form of late, Jhulan has earned back-to-back woman-of-the-match awards in her last three Tests. But she feels, that the awards are only incidental.

"Whenever I play, I just want to keep performing. If in the process I get such awards, it's fine."

The Way We Treat Our Icons