That's where the state of disaster management in the country is, as the recent floods once again demonstrated with predictable collapse and disruptions all around. 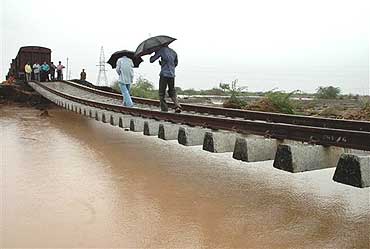 The Indore-Gandhinagar Shanti Express was stranded in the flood waters at Dakor from 10.30 am on Thursday, June 30, till the time Rajesh Seth of Ahmedabad, on Saturday, July 2, decided to wade through neck-deep waters to reach the train to rescue his wife, daughter and 70 other passengers, leading them all to safety at a time when the administration as well as the security personnel had given up on them.

Rajesh Seth’s heroics in pulling out ill-fated passengers from the train stranded in flood waters summed up the state of relief operations in flood-ravaged Gujarat. Proud of their own efforts to reach safety, the passengers wondered if they could have survived the long wait for official assistance. Not for the first time though, disaster preparedness has been one big disaster, year after year. To top it all, arrest of Bihar flood scam kingpin leaves much less to imagination.

As media conjures up familiar images of flood disaster and as large parts of Gujarat brave another bout of nature’s fury, the curious question is whether disaster preparedness could have been more precise and timely? Conversely, hasn’t disaster management inherited inefficiency and corruption to remain chaotic? As fresh disasters charter unfamiliar territories at a fiery pace, the out-of-sync `disaster management’ is found wanting in getting its act together.

No surprise, therefore, that human misery continues to grab headlines while the cause-effect relationship of disasters skips careful diagnosis. Could the intensity and magnitude of recent floods in Gujarat be predicted? Weren’t heavy rains in Gujarat during the past two years indicative of the worst ahead? With the Indian Meteorological Department restricting itself to tracking monsoon calendar and in recording rainfall distribution, predicting the location and extent of impending disasters remains unattended.

Monsoon clouds have traditionally been seen with awe and hope in a large agrarian economy, growth rate being measured on their timeliness and distribution. Sensing less than average rainfall, Prime Minister Dr Manmohan Singh had informed the National Development Council that agriculture sector may contribute less than its projected 4 per cent share to the country’s annual growth rate. But it’s time to rethink our cardboard theory: the monsoons not only spur ‘growth’ but can fuel `disaster’ too.

Amply demonstrated during the two recent disasters, floods in high reaches of Himachal Pradesh and in the unsuspecting plains of Gujarat, monsoon aggregation in selected pockets of the country can no longer be termed freak. The fact that monsoon currents traversed the distance between eastern fringes of Uttar Pradesh and western extreme of Rajasthan in less than ten days, against the usual thirty, may hold explanation for the unprecedented monsoon turbulence.

Tragically, sharp increase in the unpredictability of the monsoons has yet to prop serious scientific enquiry in the country. On the contrary, by bringing disaster management under the fold of high-profile Ministry of Home Affairs the government seems to have fulfilled its obligations towards monsoons-related disaster preparedness and management as well. Officials in the ministry do acknowledge that such changes in institutional structure rarely address the core issues.

Experts argue that leaving disaster management within the purview of the Ministry of Home Affairs may obscure the understanding of the critical dimensions of the crises that are interdisciplinary in nature. What has unplanned urban growth at the rate of 5 per cent per annum; steady decline in forest cover to mere 10 per cent; and land use changes on 20 per cent of country’s land mass got to do with disaster management in general and disaster preparedness in particular?

Dismissed as a freak incident, the unprecedented high temperature of 54 degree Celcius in the small town of Talcher in Orissa may be as remotely related to disaster management. As the world debates the causes of global warming, there is growing consensus that ‘abrupt climatic changes’ are commonplace and that these must be heard as forewarnings to the impending disasters. That rapid urbanization and land use changes promote such changes hold greater currency amongst environmental scientists.

Much as the currently underway G-8 Summit discusses global warming in light of the unusual flood-drought conditions in many parts of the developed world, India can no longer take recourse to the fact that its high profile ministry is in the forefront of disaster management. The fact that the current nature and magnitude of disasters is not only complicated but may well go beyond the conventional disaster management practices are reason enough for a paradigm shift in disaster preparedness.

So far, Indian meteorologists have been pathetically slow in responding to dramatic changes in predicting environmental turbulence along restricted corridors. That each of the large town and/or village clusters present a microcosm of impending environmental change has yet to catch the imagination of the scientists and the government alike. Not without reason therefore the recent floods in Sutlej river and the widespread floods in Gujarat escape serious attention.

Unless the country enlarges its disaster protocol to include the Ministry of Science & Technology as well as the Ministry of Environment & Forests, deploying forces for fire-fighting, as it were, will always remain inadequate. As nature churns disasters with increasing frequency and at fresh new locations, conventional disaster management may well leave trails of death and destruction behind. It is time disasters get viewed comprehensively and not from the myopic view of doling out relief packets.

Formerly with the World Bank, Dr Sudhirendar Sharma is a water expert and is attached with the Delhi-based the Ecological Foundation.