The poster was put up by Haseeb Ahmad. The poster also depicts Rijiju as a Kaurava, senior BJP leader LK Advani been portrayed as the blind king Dhritrashtra. 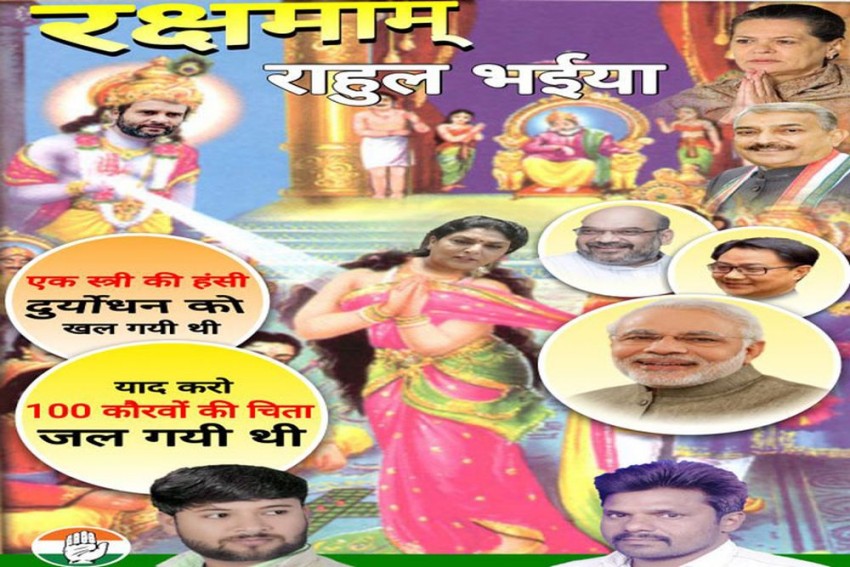 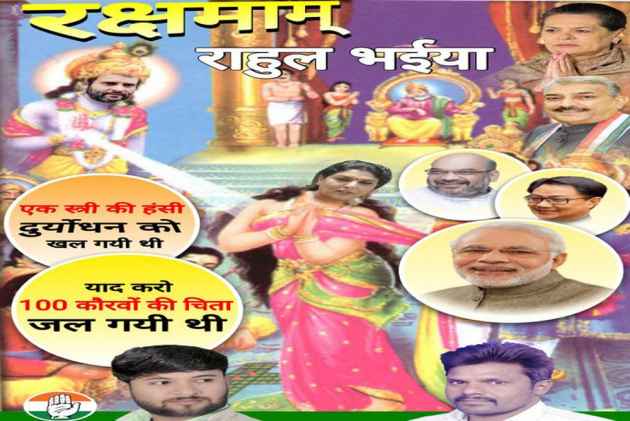 outlookindia.com
2018-02-10T20:06:30+05:30
A day after Congress MP Renuka Chowdhury moved a privilege motion in Rajya Sabha against Union minister of state for home Kiren Rijiju for posting a video of Narendra Modi mocking her laughter in the House, a Congress leader from Allahabad on Saturday put up a poster in which Chowdhury has been depicted as Draupadi while Modi, BJP chief Amit Shah have portrayed as Kauravas of Mahabharat.
According to a News18 report, the controversial poster was put up by Haseeb Ahmad. The poster also depicts Rijiju as a Kaurava, senior BJP leader LK Advani been portrayed as the blind king Dhritrashtra. Congress President Rahul Gandhi, on the other hand, is shown as Lord Krishna and ‘Raksham Rahul Gandhi’ has been written on the poster, asking him to protect women from insults. Sonia Gandhi, Priyanka Gandhi and senior Congress leader and Rajya Sabha MP Pramod Tiwari are also featured in the poster, according to the report.
The caption on the poster says, “Ek stree ki hansi Duryodhan ko khal gayi thi, yaad karo sau karavon ki chita jal gayi thi (The laughter of a woman had pricked Duryodhan’s ego, don’t forget that a hundred Kauravas died due to it).”
The Congress on Friday demanded an apology from the Prime Minister for his "insulting" reference to Chowdhury, while the MP filed a privilege motion against Rijiju for posting on Twitter a video of Narendra Modi's comments about her.
"This is highly objectionable and I am going to file for privilege," she told reporters here today, after Rijiju posted the video.
Senior Congress spokesperson Anand Sharma said at a party briefing here that Modi's remark yesterday was condemnable and he should apologise for it.
He said the prime minister had crossed the line of political discourse with his language and the "outrageous" reference.
"A women Parliamentarian (was) laughing at his language of claims," he said, referring to Chowdhury's laughter when Modi said in the Rajya Sabha that the BJP-led government in 1998 had mooted the idea of Aadhaar.
"What was alluded to is shameful. We condemn it. He should apologise," he told reporters.
Sharma said one of his ministers had posted something "highly objectionable" on social media and questioned why the prime minister was silent about it.
"The prime minister is silent on that, which is again not only obnoxious, outrageous but condemnable. The minister is silent, the government is silent. Through you I am asking the minister what he had to say. Women security does not come only by saying words like èÂºeti Bachao, Beti Padhao', as all this sounds like hollow talk," he said.
Sharma said many members did not get the reference of the prime minister's remarks as they did not watch television serials.
Earlier Rijiju had tweeted, "Despite such vexatious laugh by Renuka...Ji PM Narendra Modi ji didn't get irritated."
He also posted the video of the prime minister's remarks.
(With PTI inputs)
For in-depth, objective and more importantly balanced journalism, Click here to subscribe to Outlook Magazine