In A Powerful Speech At Golden Globes 2018, Oprah Winfrey Speaks Out Against Sexual Abuse, Says 'Time's Up' 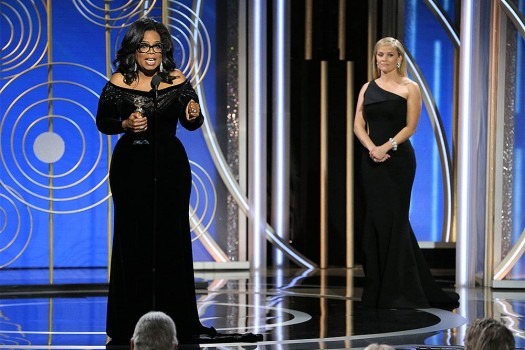 Oprah Winfrey became the first African-American woman to be honoured with the annual Cecil B DeMille Award at the 75th Golden Globes ceremony and in an inspiring speech the media mogul paid tributes to the women for speaking out against sexual abuse.

She opened her speech with her first memory of a person of colour winning an award and that was Sidney Poitier.

"In 1964, I was a little girl sitting on the linoleum floor of my mother's house in Milwaukee, watching Anne Bancroft present the Oscar for Best Actor at the 36th Academy Awards," she said to the audience's standing ovation.

"She opened the envelope and said five words that literally made history: The winner is Sidney Poitier."

Poitier became the first African-American man to win the Best Actor Oscar for Lilies of the Field and he was also the first black actor to be presented with the Cecil B DeMille honour in 1982.

"Up to the stage came the most elegant man I'd ever seen. I'd never seen a black man being celebrated like that. I tried very many times to explain what a moment like that means to a little girl, a kid watching from the cheap seats, as my mom came through the door bone-tired from cleaning other peoples' houses. But all she could do was quote Poitier and say, 'Amen, amen'."

The actor said being up on the stage was an important moment in her career and she understands how it may inspire others.

"It is not lost on me that at this moment, there are some little girls watching as I become the first black woman to be given the same award. It is an honour and it is a privilege to share the evening with all of them," she said.

Winfrey went on to address the sexual harassment scandal that has engulfed Hollywood in recent times and how press has an important role to play in highlighting issues that matter.

It was the New York Times which first exposed producer Harvey Weinstein's decades of sexual misconduct that led to the movement of hashtag MeToo and then hashtag Time's Up.

Winfrey continued her speech by acknowledging the fact that even though the press is "under siege", now there is a climate where women are being empowered to speak up and say "me too" - and men are listening.

"We all know that the press is under siege these days... I want to say that I value the press more than ever before as we try to navigate these complicated times, which brings me to this: What I know for sure is that speaking your truth is the most powerful tool we all have, and I'm especially proud and inspired by all the women who have felt strong enough and empowered enough to speak up and share their personal stories," she said.

Winfrey said their fight is not limited to Hollywood and some of the names of the women who have fought for the cause will never be known.

"I want, tonight, to express gratitude to all the women who have endured years of abuse and assault because they, like my mother, had children to feed and bills to pay and dreams to pursue. They're the women whose names we'll never know."

The media mogul remembered Recy Taylor, who died 10 days ago, just shy of her 98th birthday and without justice.

Taylor was abducted and raped by six white men in 1944.

The attack never went to trial and became a catalyst for the civil rights movement.

"For too long, women have not been heard or believed if they dared to speak their truth to the power of those men, but their time is up," she said.

Winfrey also paid tributes to Rose Parks, who refused to obey a bus driver, saying the choice "is now in every woman saying 'Me Too,' and every man who chooses to listen."

The Hollywood stood up to honour Winfrey a second time with a standing ovation when the producer said she hoped there comes a time when "nobody ever has to say 'Me Too'."

"I want all the girls watching here and now to know that a new day is on the horizon! And when that new day finally dawns it will be because of a lot of magnificent women, many of whom are right here in this room tonight, and some pretty phenomenal men fighting hard to make sure that they become the leaders who take us to the time when nobody ever has to say 'Me too' again," she said.

Winfrey's A Wrinkle in Time co-star Reese Witherspoon introduced the actor in a heartwarming speech, where she said, "Oprah's hugs can end wars".

"There's only one person's name who is a verb, an adjective and a feeling, and that is Oprah," Witherspoon said.

"When you say her name, everybody stops and listens."

The actor said she learnt a lot from Winfrey, who has changed the lives of women.

"I learnt everything from how to make the best English muffin to how it is like to be the only woman as a board member at a huge company. And her hugs. Oprah's hugs could end wars, start world peace. It is like your oldest friend has seen you after the longest journey of your life. It is that good."