In A Different Light

The sun was setting when I stepped into the vast courtyard of the Jama Masjid, and the inevitable pigeons were rising into the falling light. It was the first time I felt praise for what the past had left behind for us, and the long arc of time in th

Many years ago, when I returned from graduate school in the United States, my flight landed in Delhi. I had never been to Delhi before that, and had grown up in Calcutta and abroad. I visited the Jama Masjid. In the United States I had read, I had thought, and most of all, I had begun to feel that now it was India where I would learn. I still remember that the sun was setting when I stepped into the vast courtyard of the Masjid, and the inevitable pigeons were rising into the falling light. It was the first time I felt praise for what the past had left behind for us, and the long arc of time in this country. Calcutta was a colonial city, and so is Bombay, where I now live. The sense of the past’s presence that these two cities have is limited. 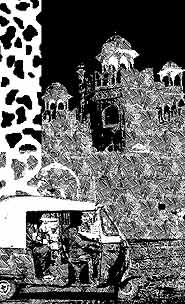 But in Delhi there are magnificent domes, walls of forts, crumbling stone, remnants of a blue from centuries ago, unforgettable carvings, textures I would never otherwise encounter. I am given the opportunity to understand the beauty of an edifice or an artefact, as well as the inevitability of its decay. I am left with time’s incomprehensible sweep, which will make my own life larger, almost as if it were space.

This has nothing to do with nostalgia, which is the most unimaginative relationship one can have with the past. I watch the way stars of light come in through the jalis and hang suspended in the darkness, a way in which they can no longer in spaces that have come after. Standing there I experience the ways in which an empire encloses space, views the sky, builds gardens; how it merges beauty and power. In places like this is where I begin to see that the past is an undertow of the present, increasing its possibilities.

As a writer I necessarily fear the disappearance of the past, or its being relegated to its pastness. India will, as we are constantly being reassured, become a superpower. Finance, industry, manufacturing and information technology will leap ahead. But what will get left behind, forgotten, and eventually strangled, is those other things that make civilisations breathe. I remember my Korean friend, the artist Chang Kyong Park, who said to me that India should not make the mistake of going the same way as Korea. And then he spoke to me of what Koreans call the han—sadness that has no expression, except in the most silent tears.

I am at the Nizamuddin dargah, late at night, with two friends. There are almost no people, and sweepers with dented faces that I remember from ancient Mughal miniatures, surrounding Akbar or Jahangir, are sweeping away the dust and paper remnants of the day. Returning home, a nilgai leaps out of the fog and across the road, and disappears into the darkness. For a moment I lose my sense of space and time. This is the kind of displacement that has no equal.

There is as much to receive here about the ways in which it is possible for light and darkness to meet, as about the nature of empires, the sense of nationhood, and the confluence of ways of being, all equalling each other in their tenuousness. This particular past that I encounter in Delhi brings things of great use and great solace to me, at this very moment.