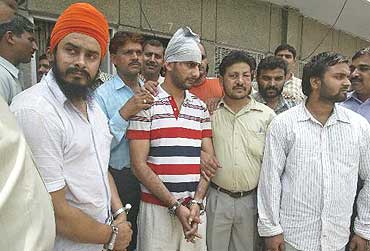 With the arrest of Jagtar Singh Hawara, the Babbar Khalsa International's (BKI) 'operations chief' in India, on June 8, 2005, the curtain has rolled down on another chapter of the long saga of Pakistan's failed attempts to revive Khalistani terrorism in Punjab. Hawara fell quickly into the net as the leader of the circle of conspirators who engineered the Delhi Cinema Hall Blasts on May 22, 2005. The rapidity with which this 'terrorist module' unravelled is an important index of the state of the Khalistani movement and of what was once the most feared terrorist organisation in the Punjab.

Hawara was arrested in the Narela Industrial Area on the outskirts of Delhi, along with two of the accused in the May 22 blasts - Jaspal Singh @ Raja, the prime coordinator in the Cinema Hall bombings - and Vikas Seth. These arrests came after another five conspirators had been arrested from hideouts in Delhi, Uttar Pradesh and Punjab. They included Balwinder Singh, who helped plant the bombs, and Jatinder Singh who were taken in by a joint team of the Delhi and Punjab Police at Nawan Shehar in Punjab on May 30; Jagan Nath, a Hindu originally from a village in the Gorakhpur district of Uttar Pradesh, who was tracked down in Madipur, West Delhi on the same day; and Bahadur Singh and Gurdeep Singh, who were arrested from village Mallpur in Nawan Shehar, on June 5.

The disruption of a single cell would ordinarily not be expected to lead to the arrest of the 'operations chief' of a group such as the BKI - one of the first groups to take to terrorism in the Punjab in the late 1970s, and regarded as the most ideologically driven and violent organisation among the proliferation of gangs that overran Punjab through the 80s and early 90s. The operational leadership is normally insulated by significant layers and 'circuit breakers', so that the arrest of one of the 'foot soldiers' cannot lead beyond the immediate cell.

Hawara, who had evaded arrest since his sensational escape from the Burail Jail in Chandigarh on January 21, 2004, clearly lacked the organisational depth that could isolate him from the bottom rung of what are evidently mercenary and most unreliable operatives. It is significant that none of the other conspirators in the present case fit the profile of the traditional and deeply conservative BKI activist. Two are Hindus, and the others have an evident taste for the 'good life' and a hankering to go abroad - legally or otherwise. All fit the profile of petty criminals who took to terror for purely mercenary motives. That Hawara was in direct contact with, and exposed to, the likes of these indicates the degree to which the ideologically motivated Khalistani recruitment base has simply vanished from Punjab.

This is despite frenetic efforts by Pakistan to keep the 'defeated rump of Khalistani terrorist organisations' (as I have described them elsewhere) alive; and despite significant flows of funding, support and propaganda from minuscule and increasingly isolated groups among Non Resident Indian (NRI) Sikhs. It was precisely this network of support that had made the Cinema Hall bombings possible.

While Hawara and Jaspal Singh 'masterminded' the operation in India, they were functioning under the direct control of Wadhawa Singh, the BKI 'chief', who continues to enjoy Pakistani hospitality ever since he fled the fighting in Punjab in the late 1980s. The group was coordinated through Satnam Singh Satta Mallian, Wadhawa Singh's son-in-law, propped up by his Inter Services Intelligence (ISI) handlers, who is currently taking advantage of the laxity of German law in Stuttgart, to manage the movement and operations of BKI cadres, who have a presence in several European countries, including Germany, France, Italy, Belgium, Switzerland, Norway and the United Kingdom. BKI is also active in Canada and USA. It is on the list of terrorist organisations in both the US and UK.

The Cinema Hall Blasts were, in essence, operations of opportunity, seeking to capitalize on a passing ferment and power struggle within the Shiromani Gurudwara Prabandhak Committee (SGPC, the administrative body that manages Sikh shrines, and that has assumed in some measure the character of a 'state within a state'), which had expressed itself in the controversy over the 'Bollywood' (Hindi) film, Jo Bole So Nihal.

Since a faction within the SGPC had challenged the decision of the Akal Takth jathedar (high priest) to allow screening of the film, and had successfully orchestrated a few public demonstrations on this 'sensitive issue', the calculation was that a few well-timed terrorist incidents may have the potential of catalyzing a wider movement and 'reviving' Khalistani passions (they had, in fact, the opposite effect, and the occasional and motivated protests died out).

The incidents also coincided with recent developments within the Damdami Taksal - the organisation Jarnail Singh Bhindranwale, the original architect of Khalistani terrorism, was drawn from - as a result of the installation of a new chief, Baba Harnam Singh Dhuma, and the formal declaration of Bhindranwale's death (the Damdami Taksal had, till now, kept the fiction alive that Bhindranwale had not died in Operation Blue Star in 1984, and would return to lead the Taksal). Combined with the protests organised by a particular faction of the SGPC and some marginal Sikh extremist organisations during the 'Ghallughara Week' (which commemorates Sikh martyrs), and the call to raise a memorial to those who were killed during Operation Blue Star, these events were thought to create opportunities that could be exploited to kick-start the spent Khalistan movement.

Such attempts have a continuous history since the comprehensive defeat of Khalistani terrorism in 1993, with a cycle of two to four years. Punjab Police sources indicate that over 100 civilians have died in terrorist related violence over the past decade (1995-2005), overwhelmingly in bomb attacks on soft targets, such as public transport, markets, cinema halls, etc. The worst year after the collapse of high intensity terrorism was 1997, when 56 civilians were killed in a rash of bomb blasts between March 14 and July 10. The year 2000 saw at least 18 civilians killed; and 2002, five.

The past three years have seen no civilian fatalities in Punjab (the single fatality in year 2005 was in the Cinema Hall Blasts, in Delhi), but there has been a continuous pattern of arrests and seizures of arms and explosives, indicating unrelenting efforts to resuscitate the terror, stifled, on each occasion, by the complete absence of public support, and the immensely improved intelligence capabilities of the Punjab Police. Over 1,000 kilograms of explosive materials have been recovered from terrorist cells in the State in this period, along with a large number of sophisticated weapons including assault rifles and grenade launchers, as well as other equipment, and at least 30 Pakistan-backed 'modules' have been neutralized.

These persistent failures can be traced to the fact that the fundamentalist mindset, which the ISI and Pakistan military establishment are themselves a product of, cannot understand the culture and the way of thought that are integral to the Sikh - and indeed, Indian - way of thought. There is a graphic and utter failure of understanding on the part of the Pakistani establishment in this, and, while such efforts can inflict great personal tragedies on hapless innocents, they have little potential to help Pakistan secure its strategic objectives in India.

Past failures and the futility of the enterprise, however, has not prevented Pakistan from continuing to support the tattered survivors of the movement in the hope that circumstances may, eventually change sufficiently to effectively revive the terror in Punjab. In addition to the BKI, its 'chief', Wadhawa Singh, and 'deputy chief', Mehal Singh, and an unspecified number of cadres, Pakistan continues to host the Khalistan Zindabad Force (KZF) and its 'chief', Ranjit Singh Neeta; a faction of the Khalistan Commando Force (KCF) and its 'chief' Paramjit Singh Panjawar; the International Sikh Youth Federation - Rode and its 'coordinator', Lakhbir Singh Rode; the Dal Khalsa International, headed by Gajinder Singh 'Hijacker'; and the Council of Khalistan, led by Balbir Singh Sandhu.

In addition, a number of Khalistani groups maintain a significant presence in several Western countries. They include the BKI, KZF, KCF-Panjwar, Khalistan National Army, Kamagata Maru Dal of Khalistan, Sikh Youth of Belgium, ISYF, the Council of Khalistan, Sikh Youth of America, and the Sikh Affairs Committee. Their efforts are closely coordinated by the ISI, and though these groups have not engaged in violence in these countries in recent times, they continue to provide critical support in terms of funding, propaganda, logistical coordination and recruitment. Several young men based in these countries have undergone training in Pakistan in the handling of sophisticated weapons and explosives, with the understanding that their 'services' may be called for at an appropriate time.

In addition to the BKI, among the relatively active of these groups in recent times has been Ranjit Singh Neeta's KZF, which has been responsible for several incidents of explosions in Delhi, Haryana, Punjab and Jammu & Kashmir (J&K). One of the active modules of the KZF was neutralized towards the end of 2004 in district Gurdaspur, leading to a massive recovery of weapons and explosives. The module included two Pakistani nationals - Mohammad Hanif and Abdul Hamid - who had been given Sikh identities.

The ISI has exploited these various groups for a range of other subversive activities as well, including the provision of active assistance to narcotics smuggling and narcotics transportation to various destinations; the distribution of fake currency; and espionage. There have been repeated attempts to forge alliances with Islamist militants active in J&K, but these have, at worst, met with very limited and transient success.

It is abundantly clear that, despite the abject failure of the Khalistan movement, Pakistan continues to maintain and support these various groups in the expectation of future opportunities that may arise out of political circumstances in Punjab, or from predicaments that arise out of transient exigencies, as was the case in the Cinema Hall Blasts in Delhi, which sought to exploit momentary passions whipped up over the film, Jo Bole So Nihal.

While the prevailing circumstances in Punjab make any significant revival of the Khalistani terror an extraordinarily remote possibility, a residual capacity to cause local disruption survives, and dovetails with Pakistan's long-term intent in India. As with the many other terrorist, insurgent and subversive movements and groups across India, the Khalistanis can rely on Pakistani support as long as they retain this residual capacity, and as long as Pakistan's dominant political forces remain relentlessly tied to the country's roots in the ideology of religious exclusion, theocratic authoritarianism, communal hatred, and Islamist extremism - ideas in irreducible conflict with India's defining ideologies of secularism, liberalism and democracy.

The Media Did It!