'I'd Like To Be Labelled A Writer Of Literary Fiction'

The author of Ladies Coupe on train journeys, women, writing and writing styles... 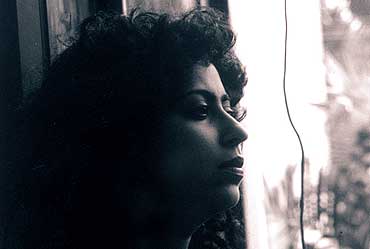 Eleven years ago, Anita Nair climbed on to the top berth of a ladies compartment in a train from Bangalore to Madras and discovered an unexpected world. Once the door was closed and the blue night lamp switched on, the middle-aged women began a conversation that riveted the 24-year-old to her berth. It was "a no-holds-barred conversation on mothers-in-law, daughters-in-law, husbands, everything." Their candour, their subversiveness, their subtle strength and courage inspired her novel, Ladies Coupe. Excerpts from an interview:

What is it about a train compartment that makes women pour out their souls?

I think it is the confined space and the fact that you are talking to strangers, someone you'll never meet again. It is like a confessional box, you are assured anonymity. Besides, who ever listens to women, except maidservants perhaps, so when they get a chance they really talk.

Why did you choose a theme--women's struggle to get control over their own lives-- don't you think this has become a little cliched?
No, I am talking of the vast majority of Indian women--the suburban and rural women--who still have little control over their lives. It is a book I wanted to write very much because it disturbs me: in many ways my life was similar to these women.I have been criticised for being outdated, but I don't think women's lives have really outgrown these struggles, at least in the South, where I come from.

Perhaps it's because of our pre-conditioning. The stories told to us by our mothers and grandmothers. I remember one story my mother used to keep telling me when I was growing up--there was this girl who had got married and was sent back to her parents because she didn't know how to cook! It was a cautionary tale, but I don't ever remember her telling me the importance of things like knowing how to change a light bulb, for instance.

Can you describe your own background?

I come from a very ordinary middle-class family. My father used to work in the ordinance department so we had a metropolitan life, first in Madras and then in Bangalore. My mother is a housewife. I was brought up to be a good housewife and nothing more. Taught womanly virtues such as how to serve tea and do embroidery. But then I broke the mould by deciding to marry the boy next door. Because he did not belong to my caste, the Nairs, it was a problem initially but my parents accepted our decision. My cousins often tell me that if it were not for my example, they would never have the courage to confide to their parents about the men they wanted to marry. So many women just buckle in to pressure from parents.

Are you not afraid of being pigeon-holed as a women's writer with this book?

Yes, of course I am. Which is why I wrote a book about men first, The Better Half. I prefer writing about men--they don't pounce on you because you are not being politically correct in the way women have been doing since I wrote this book. But I think I have found my niche. I like to write about ordinary people and don't want to write about characters larger than life. I'd like to be labelled a writer of literary fiction. I like books like I. Allan Sealy's Everest Hotel. It's a wise book and depicts its characters with a certain dignity. All these books with superfantastic creatures and eccentrics I find merely mediocrities disguised as cleverness. I am not eager to show off brilliant writing techniques. All that stream-of-consciousness and magic realism I keep for my poetry and my column (in southern Indian edition of Indian Express). But my novels I like to keep simple and straight.

The structure you have chosen--of six women narrating their life stories--is a very traditional narrative form, as old as Chaucer's Canterbury Tales and the Mahabharata. It shouldn't have posed any problem for you?
On the contrary, I had a lot of difficulty with the structure. I had these six stories, and I didn't know how to put them together. It was a bit like piecing together a patchwork quilt--you have the individual pieces, but how do you make them into one? At first I thought of setting it in a ladies queue at a railway reservation office, but somehow it didn't work--how can they exchange long stories while they are standing? Then I hit upon this.

Was it easy to write the individual stories?

No, it was very exhausting because through each of those stories I relived my own rage and despair. I'd write about my character's marriage, for instance, and then stop and ask myself, Hey, what about me? Why do I have to do everything? I felt quite relieved when it was over, actually. But it was a catharsis, now I am at peace with myself. I no longer feel the need to be Princess Zeena, the superwoman. I have always been cautious, hanging on always to a Plan B. Now I don't feel that cautious. I can be myself.

Why is it that there is so little humour in Indian women's writing in general?
As Indians, we don't have a great sense of humour, like the British. We don't laugh at ourselves, we laugh at jokes. There is a humour in my book, but it is very subtle. There is very little room in a woman's life to laugh about something.

What did you enjoy most about writing this book?
The food. When I was a little girl in Madras, we had these Brahmin neighbours across the landing. They didn't cook much, but sometimes, when they had guests, there would be all these wonderful smells wafting to our doorstep--kesar halwa and all that food I've written about. I so wished they would invite me over. Then I liked writing of the illicit pleasures of eating a boiled egg. I am not a vegetarian, but it was good to get the taste and feel and sensations of something so ordinary as a boiled egg.

The Magician From Malgudi