'I Want To Play Elder Brother'

Undaunted by the numerous injuries that have plagued his career of late, Sachin wants to add value to Team India by nurturing the new match winners and see it win more matches. 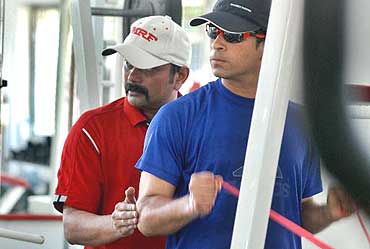 Seventeen years of international cricket have taken a toll on Sachin Tendulkar but the batting maestro wants to continue playing in both formats of cricket -- Tests and ODIs.

Tendulkar says he is still enjoying the challenges thrown up by the shorter and longer versions of the game and has not thought of quitting any of the two to extend his international career.

"I have not thought of this. I always believe in putting all my efforts in both forms of the game. One-day games are also equally important as Test matches," he said in an exclusive interview.

"I like the challenges under pressure situations in limited-over games and similarly when you negotiate the good spells of rival bowlers in Test matches", says the 33-year-old star batsman who has scored 10,469 runs in 132 Tests and 14,146 runs in 362 ODIs.

Asked whether retirement was on his mind, he said, "I have not thought of it as yet and will plan when I have to cross the bridge."

Tendulkar, who opted out of the Test series against the West Indies yesterday after failing to recover fully from a shoulder injury, is now keen to play the role of an "elder brother" to India's new match winners.

Undaunted by the numerous injuries that have plagued his career of late, world cricket's senior statesman wants to add value to Team India through his nurturing skills and see it win more and more matches in the process.

Tendulkar attributes India's recent success in one-dayers to the emergence of a new breed of match winners in the team which, he says, has made a huge difference.

"The difference that we see today is that we have more match winning players in the team and this should augur well for winning more matches and series, besides tournaments in the near future.

"It is just the fact that we have talented players, besides contributions of the support staff of Greg (Chappell), King (Gregory), John (Gloster), Ian Frazer and others for the success rate of the team," he explains.

The combination of both the talent of the players and the commendable job done by the support staff has contributed to the present performance graph of the team, he points out.

As a role model and a senior in the team, how does he gel with the youngsters?

"I move with them like an elder brother. All of us gel perfectly and get along well. While we are together, the atmosphere is like one family. Under pressure situations, we feel the togetherness much more and always work as one team. Everyday, while on tours or playing at home, passes off with memorable experiences," he says.

Tendulkar admits the appointment of Chappell as coach has added value to not only his game but also to all the others in the team.

"Somebody who has been around for a long long time has to provide value to each and every player in the team. Greg has been in the game as a player, captain and otherwise for 40 years.

"He himself was such a top player and the way he approaches the game, his thought process in analysing the game has been remarkable. He has definitely added value to not only my game but also to all the others in the team."

The ace batsman said he often got "new ideas" talking to a person of Chappell's stature and his interaction with the coach had been beneficial in match situations.

"Greg and I do discuss about these things and mental aspects of players. Interaction on such matters with Greg is always good and a positive thing to do.

"In fact, one does get new ideas talking to a person of Greg's stature and it definitely helps in actual match situations," says Tendulkar, who has a world record 35 Test centuries to his credit.

And like Chappell, does he believe that cricket is also played in the mind or is it a myth?

"Yes, it is true and not a myth. The mind is equally important for positive results. Like Greg, I am also a believer of mind apart from my abilities. All these factors do help in a player's performance," he replies.

Is he embarrassed when he is referred to as a 'demi-God' by cricket fans?

"I am not a demi-God and I am not at all embarrassed of anything. I always feel happy about the brotherhood and faith that my countrymen have in me. I enjoy every moment of such support from them. I take pleasure in bringing smiles to millions of my brothers and sisters and supporters. It is a God given gift to me," Tendulkar says.

On whether the smooth functioning of the Board could help the team to perform better, he says "These are two separate issues. I do not have any knowledge about administration.

Tendulkar acknowledges the role played by his family in shaping his career and supporting him in difficult times. He cites the 1999 World Cup in England, when his father passed away, as an example.

"That particular decision was very tough. I credit everything to the support extended by my family members during my father's death. I derive strength because I take pride to be an Indian and I always prioritise India ahead of everything that I do.

"To me the nation comes first and I am fully focussed towards these when I walk in to the field of play. These things have strongly set in my mind and help in my will power to be totally focussed and committed," he says.