'It's hard to imagine life without cricket,' confesses the master blaster ahead of his 30th birthday 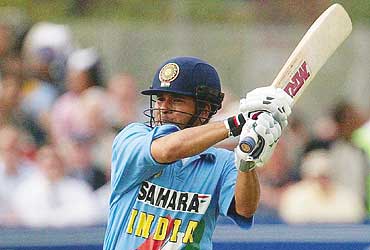 Sachin Tendulkar's appetite for cricket has not diminished as the master batsman confesses that he wants to "go on and on" with the game even after 14 years of international cricket during which he has amassed over 21,000 runs in Tests and ODIs.

On the eve of his 30th birthday tomorrow, Tendulkar said "all I want to do is to go on and on. It's hard to imagine life without cricket".

In an interview to a television channel to be telecast on tomorrow, Tendulkar said that he "hates losing" and "that hunger for winning" is there whenever he steps on to the ground.

"I hate losing and cricket being my first love, once I enter the ground, it's a different zone altogether and that hunger for winning is always there."

In a candid interview Tendulkar also talked about his experiences in the World Cup in South Africa where he emerged as the top run-scorer to walk away with the man-of-the-tournament prize.

Tendulkar, who had an indifferent form going into the World Cup, reveals that "things changed" the moment it was decided that he would get back his opening slot.

"That was a new chapter for me, a challenge. So I wanted to prove myself and the World Cup was a great occasion," he said.

Tendulkar went on to plunder 673 runs from 11 games, more than anyone has ever done in one World Cup, playing some masterly knocks, like the ones against England and Pakistan at the league stages.

His clinical assault on Andrew Caddick, England's lead bowler who had challenged Tendulkar ahead of the match, paved the way for India's comprehensive victory against the Englishmen and also provided the momentum to the team's march to the final.

"I didn't want to prove a point, because bowlers always want to make a statement and my job is to go out and score runs for India. We defeated England in the NatWest Trophy and also in Sri Lanka (ICC Champions Trophy), but it was a psychological game and I wanted to settle a score because memories of losing at Wankhede Stadium (last year) were there," Tendulkar remarked.

Similar treatment to Shoaib Akhtar during his destructive 98-run knock against Pakistan helped India register a memorable victory against their arch-rivals. Tendulkar again emphasised that the assault on the world's fastest bowler was not aimed at silencing Akhtar who too had targetted him before the match.

"I cannot let my mind be disturbed by these things. In fact, I don't want to be dragged into these things. It is my job to make runs for the country and win. That is the job I have to do."

Tendulkar was in acute pain due to a muscle pull during the latter half of that knock against Pakistan and many felt that he should have taken the help of a runner.

"I have never played with a runner in my entire life, even in schools, because only I know where the ball is going and how hard, when I hit the ball... something my runner will never know about," Tendulkar said.

"The moment there is contact, your sub-conscious mind knows whether it is a single or more. It is that fraction of contact that matters."

Indeed, Tendulkar was dismissed in that match shortly after calling for a runner when he was just two runs short of completing his 35th one-day century.

Tendulkar, who normally uses a very heavy bat, revealed that he had altered the weight distribution of his bat keeping in mind the pitch conditions in South Africa.

"In India, Sri Lanka and Pakistan, where the pitch does not offer much bounce, bats are made heavier at the bottom. I went for a different weight distribution because in South Africa, the ball bounces a lot."

Tendulkar also recounted the incident when, as a child, he fell down from a mango tree along with his friends while trying to pluck the fruit, earning a reprimand from his elder brother who led him to a cricket field so that he utilised his time better.

"So if you want to play for your country, start climbing mango trees and plucking mangoes!" was Tendulkar's advice to his fans.