With the win, the Delhi-based side jumped to the top half of the league table with eight points from six matches. 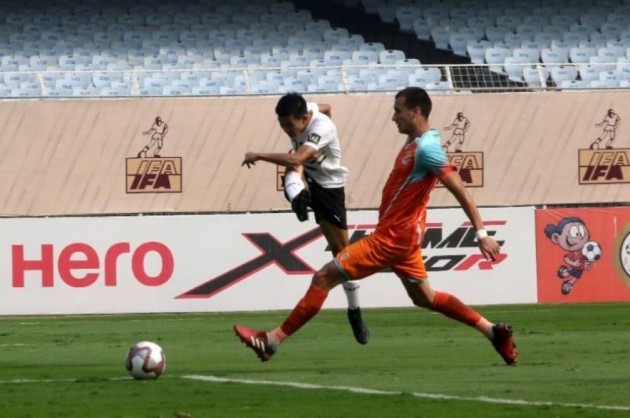 With the win, the Delhi-based side jumped to the top half of the league table with eight points from six matches.

Naocha Singh scored a quick-fire brace in the first 10 minutes of the match and Mahesh Singh and Manvir Singh struck in the second half to outplay the Chennai team.

Sudeva got off to a strong start and found the net twice in the first ten minutes of the match.

First, in the sixth minute, Naocha tapped home from inside the box after he was found by a brilliant Naorem Mahesh cross that completely bamboozled the opposition defence.

Chennai City were playing catch-up for most part of the first half, losing balls easily in the midfield and failing to retrieve second balls.

Spurred by the double strike from Naocha, Sudeva went for the kill, looking for their third goal.

In the 23rd minute, Kean Lewis missed a clean chance after a Mahesh Singh header found him clear on the far post, from a long throw-in. The midfielder hit the post as the ball went back into play.

Sudeva came out even stronger in the second half and scored their third goal in the 51st minute.

Naorem Mahesh dodged past two Chennai City defenders, beating them with sheer pace, and coolly slotted the ball home with his left foot.

A rattled Chennai City FC committed bodies in attack but they still could not find the openings. It was rather Sudeva who again threatened to add to their tally.

After wasting two chances, Manvir found the net in the 71st minute when his curling shot from close range went past the opposition custodian to bulge Sudeva's lead to 4-0.

To add to the woes of Chennai City, their player Elvedin Skrijelj was sent off in the 80th minute after a foul on a Sudeva player.