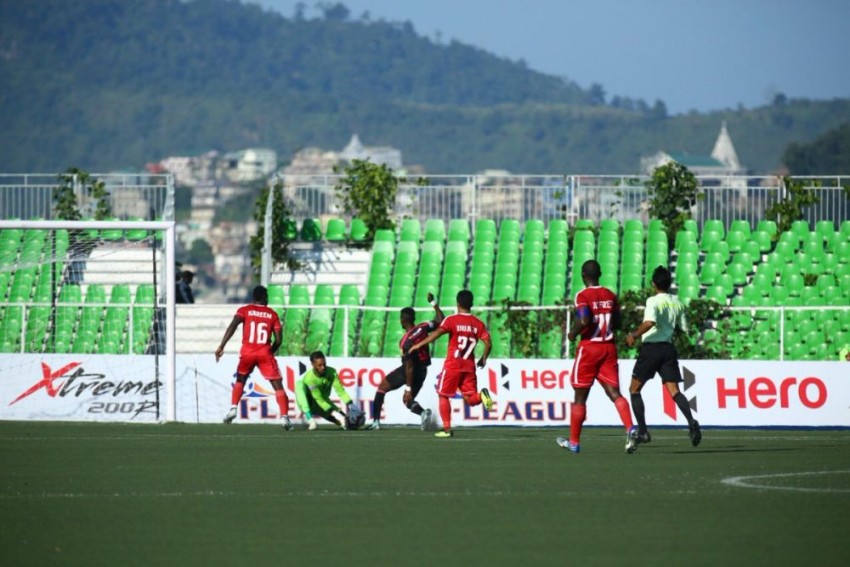 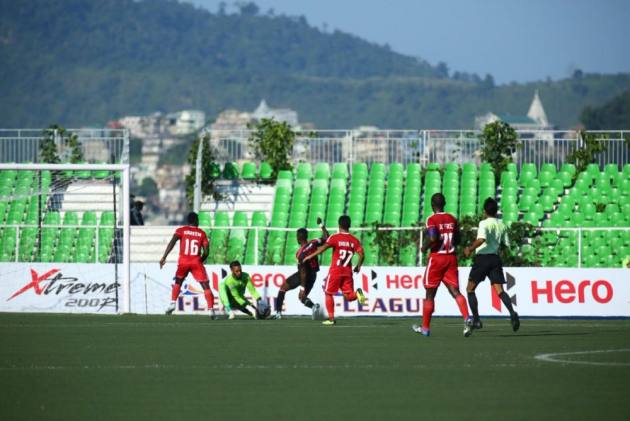 At Cuttack, Cameroonian striker Dipanda Dicka, the top scorer of the last two editions of the league, opened his account this season with a brace of goals in Bagan's 2-0 win over Indian Arrows.

Earlier in the day, defending champions Minerva registered their first win of the campaign, overcoming former champions Aizawl FC 2-1 on the artificial turf of the Rajiv Gandhi stadium at Aizawl.

The Arrows suffered their second loss and remain on three points, courtesy their win against Shillong Lajong at the same venue.

The Arrows strategy was clearly to sit back and defend as Mohun Bagan not only dominated possession but also had all the goal scoring chances of the first half. As early as the second minute, Ugandan striker Henry Kisseka found himself in the clear inside the Arrows box but he hit wide with only the keeper to beat.

Then Dicka, in the seventh minute, got a free header from an Omar Elhusseiney cross from the left but he nodded straight to Prabhsukan Gill in the Arrows goal.

Kisseka missed a couple of chances but the first goal arrived in the 30th minute. Kisseka got hold of the ball outside the Arrows box on the right and bulldozed through three defenders and sent a cross past Gill for Dicka to score with a diving header.

The Arrows began to show some attacking intent five minutes from the end of the first half and Boris Singh made an eye-catching run down the Mohun Bagan box but yielded nothing in the end.

However, just before the end of the half, Pintu Mahata, who had switched flanks, cut in from the left and his cross caught the outstretched hand of a defender and the referee pointed to the penalty spot. Dicka slotted in for his and Mohun Bagan's second of the game to give them the required cushion going into the break.

Arrows coach Floyd Pinto brought in Khumanthem Meetei in the second half in the midfield in place of right back Aimol in a clear change of tactics intended to bring in more attacking impetus.

Rahul K P, who continued to impress with every outing, was at the heart of this impetus but the Mohun Bagan defence, led by Nigerian Eze Kingsley, held the fort.

Among the best chances for Mohun Bagan in the second half was in the 68th minute when Dicka rose to connect a cross from Arijit Bagui from the right flank but his header was brilliantly tipped over the bar by Gill. PTI PDS PDS
PDS

In Aizawl, Lancine Toure's two headers off corners by centre-back Lancine Toure ensured that despite a late penalty conversion by Leonce Dodoz for the home side, the 'Warriors' from Punjab logged a full three points from the encounter.

The champions were clearly bolstered by the induction of two Nigerians, Donatus Edafe and Bala Alihassan Dahir, the former in particular having a huge impact on Minerva's performance compared to their last two games.

Home team coach Gift Raikhan started Ivorian Dodoz and David Lalrinmuana on the day in place of Albert and Lalrinfela while Minerva brought in Bala Dahir and Edafe, replacing them with Akash Sangwan and Makan Chothe as well as Moinuddin in place of Ivorian Alexandre who played the last game.

Dodoz cut in beautifully inside the box from the left and his effort brought about a save from Bhaskar Roy in the Minerva goal, who padded it away for a corner. In the sixth minute, Toure fouled David in a dangerous position outside the Minerva box. His free-kick on target was well collected by Bhaskar.

Minerva then got a break when Toure's header off a William Opoku corner gave Minerva their first goal of the league and the lead.

The goal shifted the momentum towards Minerva, and they put up a splendid display of fast counter attacks and innovative set pieces. Edafe's ball skills and enterprise, in particular, will be a good omen for Irishman Paul Munster's side going forward.

In the 12th minute, Moinuddin was found free inside the box by Opoku, who in spite of having time and space to control, chose to go for a first timer but the ball lobbed over the Aizawl bar. Moinuddin then got one into the net of a cleverly-taken corner, but was called for offside.

Aizawl too had their chances and in the 24th minute, Dodoz found Bektur inside the box with a wonderful pass and the Kyrgystani turned his defender and was ready to pull the trigger, but Arshdeep's slide denied Bektur.

That brought about a bit of rough play and resulted in a couple of bookings on either side. Novin Gurung was booked for a rash tackle on Moinuddin, who had to be eventually replaced by Akash Sangwan and Philip Njoku also picked up a yellow card for Minerva.

Both sides missed a couple of more chances, but Minerva took their one-goal lead into the lemon break.

Aizawl again began the half stronger with Kromah striking a volley from just outside the box which went over. However, just like in the first half, Minerva came back into the game and Lancine Toure got his second headed strike in the 59th minute, again off a William Opoku corner which pierced Gurpreet in the Aizawl goal and the last defender on the line, going in on the bounce.

The rest of the half was about Hero of the Match Toure missing a couple of more headers from corners and Kromah for Aizawl muffing up two chances.

The home team got a penalty to pull one back. A long ranger found the outstretched hand of Akashdeep Singh inside the box and referee Raktim Saha had no hesitation in pointing to the spot. Dodoz converted despite Bhaskar Roy diving the right way.

Aizawl did try to press for the equaliser but Minerva, who had in between bolstered their defence by bringing in Deepak Devrani for Dahir, held out for a first win.