Centenary club East Bengal broke a three-game losing streak, including Kolkata derby loss, to bounce right back into contention for the I-League title with a 2-0 away victory over defending champions Chennai City FC on Saturday evening 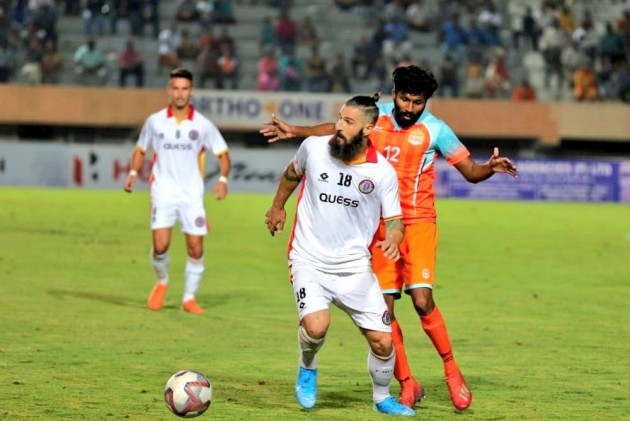 East Bengal hardly put a foot wrong on the day with stand-in coach Bastab Roy setting the ball rolling with three changes which paid rich dividends in the game.

Mirshad got his first game of the season under the East Bengal bar and had a very good day in the office, while Asheer Akhtar, in the heart of the defence, built on the potential he had already shown earlier in the league.

Mizo winger Brandon Vanlalremdika also got a first start of the season and before he was replaced in the 66th minute should have had at least two goals to his name. Marti Crespi, Pintu Mahata and Lalthuammawia Ralte were the ones to miss out.

The first chance of the game went to Chennai's Spanish striker Adolfo 'Fito' Araujo, one of the three he would get in the entire game. While Chennai dominated possession in the first half, East Bengal clearly had far better chances to score, one of them a missed penalty by Colado after the ball was handled inside the box. Nauzet Santana brought off a first of many good saves in goal on the day.

At least on three other occasions in the half, East Bengal players found themselves one-on-one with the keeper but each time came up with newer ways to miss. Brandon missed a couple, one-off a wonderful Espada through ball on a counter with Santana again coming out brilliantly to thwart the diminutive Mizo.

Colado, in the 35th minute, inexplicably saw his lob sail over Santana and the crossbar and minutes later Juan Mera missed another golden opportunity to score for East Bengal.

The half ended goal-less but the Kolkata side were clearly in the ascendancy.

After resumption, Brandon hit the post again in the 58th minute, this time after curling one past Eslava from close range. That would be his last effort of the game as Liberian frontman Ansumanah Kromah replaced him.

East Bengal finally broke through in the 68th minute with Kromah having an immediate impact. He played Colado into the box on the right, and the Spaniard broke away towards the goal line and crossed for Espada to tap it in expertly from close. It was a typical poacher's goal and Espada took his tally to five for the season.

The Red and Golds then got a second penalty, Jishnu Balakrishnan being adjudged to have brought Colado down in the box.

East Bengal and Colado were not to be denied a second time and closed out on a much-needed victory.

They now moved up to fourth spot with 11 points from eight games while Chennai remain on eighth with eight points from seven matches.