'I Have Realised My Mistake'

The railway minister is certainly upset after the resignation drama and the charges of corruption against him by two MPs. But he avoids making any direct comments about any party leader during his long conversation with Outlook Saptahik and spent mo 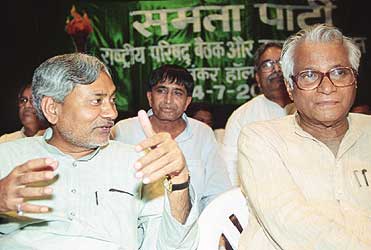 What was the real reason behind you resignation from the post of Railway Minister? Why did you take it back after sticking with it for two days?

Speaking from the podium at Samta Party national council, some colleagues raised certain issues for no justifiable reason. Even the manner in which the issues were raised was not right. I also got the false impression that they had boycotted the council after raising those issues. Infuriated by this, I made the wrong decision of resigning from my ministerial post. Later I realised that my decision had disappointed the party, the railway officials, many workers' groups and my ministerial colleagues in the central government. I felt that I had hurt a lot of people by my emotional act. That is why I took back my resignation.

Is it true that the rest of the Samta MPs teamed up against the decision taken at your behest to expel the two MPs - Brahmanand Mandal and Raghunath Jha who charged you with corruption, and being cornered you were compelled to resign?

This is not true. No one has considered their charges seriously, and I am myself ready to face an enquiry. It is because Prabhunath Singh was talking to Raghunath Jha for a compromise and his return to Samta Party, and in the mean time both were expelled , that's probably why Prabhunath Singh felt hurt. In his exasperation he said something and I took my step. There's nothing else. Everyone is with me. All of them persuaded me to take back my decision and end this misunderstanding. Now everything is normal.

What's your reply to the letter Brahmanand Mandal and Raghunath Jha wrote to the Prime Minister about your alleged corruption?

I have already replied, it is all nonsense, it has no basis. George Fernandes has himself said that the charges are false. Still, I am ready to face any enquiry.

According to Prabhunath Singh you have agreed that it is possible for Mandal and Jha to return to Samta Party if they accept their mistake and apologise?

What Prabhunath Singh has said is correct. I have no problems.

While rail accidents occur everyday, isn't it unfair to resign because of the infighting in your party? Can't we say that the disagreements in your party are more important for you than railway safety?

I have already said that the resignation was an emotional act and I have realised my mistake. As far as rail safety is concerned, there is a drop in the number of accidents.  I have continuously kept railway safety as the only top priority in my work.  If you want a proof of what I say, please talk to any railway official or union leader. Its because I was  working seriously towards an improved plan for railway safety that all the officials and union leaders jointly requested me to take back my resignation. Recently, after conspiracies of sabotage were exposed in Bihar, it has been proved that to an extent the accidents are part of some conspiracy. As far as the question of correcting our mistakes at the ministry level is concerned, I am working in the direction.

Don't you think the disagreements in your party and the resulting trouble has only been temporarily solved?

It is not like that. Everything is normal. There is no argument anywhere. Whatever misunderstandings were there, have been solved. We are united.

'George Is A Puppet. He Does What Nitish Wants'